Land of Festivals
Habermas and a very brutal drummer

Land of Festivals in Palermo aims to help festival professionalize and network. Eight festivals in southern Italy, Sardinia and Sicily enter into a productive dialogue. The Goethe-Institut spoke with Piero Maltese, the artistic director of MainOFF, a festival for electronic and experimental music in Palermo.

What was the basic idea behind MainOFF?

MainOFF was formed 14 years ago in a squat and was initially very informal and was intended to give a place to electronic and experimental musicians who would otherwise make their music like nerds do: alone at home. We had a stage and wanted to introduce this music to the audience in Palermo, which then was familiar with electronic music primarily from the dance floor.

Kollaps, the first album by the Einstürzende Neubauten, and Decoder, a film by Klaus Maeck, a pretty wild story about “Muzak.” Two exponents from the German underground played in the film: Christiane F. and FM Einheit. Later, I wrote my dissertation on Jürgen Habermas’s Between Facts and Norms, while my first contact with the Goethe-Institut was at a concert with a prepared piano and a very brutal drummer – that was a terrific concert and really a formative encounter. 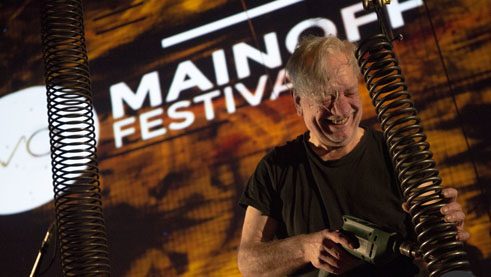 Does that have a direct effect on your programme?

Absolutely. We ask ourselves which artists we want to invite and what we want to tell artistically in our festival. And with the Goethe-Institut, we try to portray part of Germany’s underground at the festival. Together, we managed to bring the Raster-Noton label to Palermo, and last year, about three months ago, FM Einheit. These are strong brands!

What experiences did MainOFF have with Land of Festivals?

I met a lot of people who are doing similar projects and are struggling with similar problems. And that is the essential thing: networking a number of experiences. And maybe Land of Festivals will allow us to further develop MainOFF this year, even though I can’t say anything about it yet. In addition, it’s good that I can contribute what I heard at our last workshop directly to our work. For example, it’s about the role of volunteers who can generate audiences through their networks. That is valuable information.

The political crisis is contrasted by an incredible creative urge


Political parties, social institutions and even squats are losing importance not only in Italy, but everywhere. Strangely enough, the festivals manage to bring together more and more people and take on the classic functions of old social structures: to create a community, build a social system, and simply enable people to make something happen. Even if we are in a major political crisis, it is contrasted by an incredible creative urge from more and more festivals.

What do you expect from Land of Festivals?

Our next topic “audience development” is very important to us. We can certainly learn a lot. We want and need a bigger audience, even if our programme is specific and maybe not suitable for the masses. Still, we want to grow without losing our naturalness, our enthusiasm.

The interview was held by Roman Maruhn, Goethe-Institut Palermo