NSU Stage Play
That should not have happened

The NSU trial is one of the most complex in recent German history. For the first time, Tuğsal Moğul’s NSU play Auch Deutsche unter den Opfern (Germans also among the victims) can be seen in Turkish in Istanbul. The idea for the play arose during a scholarship stay at the Kulturakademie Tarabya, which the Goethe-Institut operates together with Germany’s Foreign Office.

Only a few steps away from the bustling shopping street in the centre of Istanbul, a signpost points the way: Kumbaracı 50. On the stage of the small theatre, three actors circle one another while telling a story. They shout, one laughs scornfully. A shot rings out. Someone is lying on the floor. Three names crack like whiplashes amid the Turkish words: “Uwe Böhnhardt.” “Uwe Mundlos.” “Beate Zschäpe.”

According to all that is now known, the three neo-Nazis killed ten people in Germany, perpetrated two bomb attacks and committed 15 robberies. They chose their victims based on their foreign-sounding names: Turkish, Kurdish, and Greek names. One policewoman was murdered, as well. She was German.

What if the victims had had different names?

Auch Deutsche unter den Opfern (Germans also among the victims) is the name of the production by the Münster-based director Tuğsal Moğul. The play premiered in Germany in 2015 and was awarded the Monica Bleibtreu Prize for “Best Contemporary Drama.” In it, Moğul tells the story of the NSU murders and reveals the failure of the police and the intelligence services. He is convinced, “If the victims had had different names, Thomas or Peter, and if the killers had been called Abdullah, Mustafa and Fatma, it would not have taken 13 years to expose the killings.” 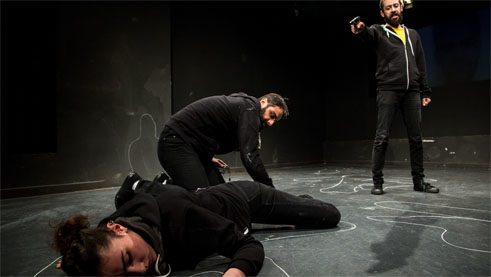 Tense mood – the play compiles intensively researched facts, police reports and politicians’ statements. | Photo: Yücel Kursun Tuğsal Moğul was born in Westphalia. His family was originally from Istanbul. He speaks Turkish and knows his way around the metropolis on the Bosporus. For two months, he was a guest at the Kulturakademie Tarabya there, which is run by the Foreign Office and curated by the Goethe-Institut. During his encounters with Turkish artists, he realized that they did not know the NSU story. “I dropped a few names,” says Moğul, “including the name Beate Zschäpe. And then I noticed that in the Turkish press, apparently, little was reported about it. Even though many victims had a Turkish background.”

The actors were unfamiliar with the history of the NSU murders

Tensely, the director follows the play of his three actors on stage. Ceren Sevinç, Deniz Gürzumar and İsmail Sağır – none of them had ever heard of the NSU, the National Socialist Underground. Could it really be possible for a terrorist organisation in Germany to murder people unchecked for so many years? “I thought something like that couldn’t happen in a modern democracy,” says Deniz Gürzumar. His colleague Ceren Sevinç adds, “According to what one hears here about Germany that should not have happened. That really gave me pause.”

The German authorities failed miserably in their investigation of the NSU murders. The many mistakes and investigative errors make many believe in a conspiracy. Not only the unfamiliar image of Germany, but also the way the Germans deal with the topic is irritating. The actor İsmail Sağır is surprised that a stage play in which state institutions come across so badly is receiving state support. At the same time, he expresses respect. “A democracy must also be capable of self-criticism,” he says and shakes his head thoughtfully.