Günter Grass Exhibition
“Beyond the final hill, the sea”

Günter Grass had an especially close relationship with Portugal. The travelling exhibition Encontros presents works that emerged from his encounters with the people and the natural landscape of the country. The exhibition in Porto, which originated in collaboration with the Goethe-Institut, was also visited by Federal President Frank-Walter Steinmeier.

“My luxury is my own lemon for tea. A little tree stands in Portugal to oblige me in winter,” wrote Grass in his 1997 book Fundsachen für Nichtleser (Found Objects for Non-Readers). He and his wife Ute were drawn to their agave and cactus-lined house in the hinterland of the Algarve during the colourless German winters. The vibrancy of nature, combined with the productive tranquillity of its refuge, its culinary abundance and its proximity to the sea, that place of constant searching, are merely elements of a multi-layered relationship. Grass first travelled to Portugal for a debate in 1976, two years after the Carnation Revolution, at the invitation of the Goethe-Institut and from then on actively participated in Portuguese cultural life. He was a close friend of José Saramago who received the Nobel Prize for Literature one year before him. 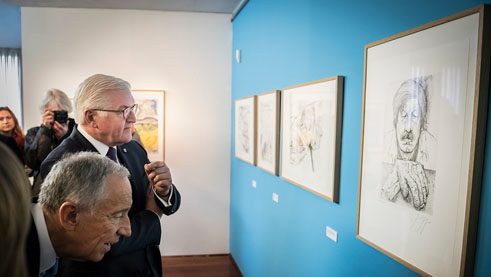 Frank-Walter Steinmeier and the Portuguese President Marcelo Rebelo de Sousa admire a self-portrait of Günter Grass. | Photo: Bundesregierung/Steffen Kugler The exhibition was first shown in the vicinity of his house in the Museum of Portimão. It then opened at the Casa Museu Guerra Junqueiro in Porto on 2 March. Displayed on the two floors of the museum, watercolours, etchings and sculptures reveal how Grass experienced Portugal and how the country shaped and fostered his work. In his works, in addition to found objects and plants, encounters between the land and the sea are striking: the fish that the enthusiastic cook painted before or after eating it, a stranded shell, feathers floating above the sea. Among other things, Grass drew using sepia ink that he extracted himself; its longevity and expressive colour inspired him.

Before the opening, Federal President Frank-Walter Steinmeier visited Encontros together with his Portuguese counterpart Marcelo Rebelo de Sousa as part of a state visit. Claudia Hahn-Raabe (Goethe-Institut Portugal) and Hilke Ohsoling (Günter and Ute Grass Foundation) led them through the exhibition and the conversation soon revolved not only around the exhibited works, but also the recognition that Grass found as a temporary citizen and especially as a writer in Portugal. The evening was followed by the opening ceremony, which was attended by colleagues of Grass such as the writers Tilman Spengler and Katja Lange-Müller and the translator Helena Topa. Together, they read poems from Fundsachen that had been especially translated into Portuguese for the occasion. 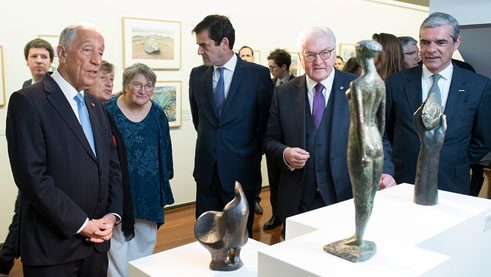 Found objects in words and pictures

Graphic designer Arne Kaiser, responsible for the exhibition design, explained that one of the aims of the exhibition was to emphasise the constant interaction of words and pictures in Grass’s work. This unity is also evident in the exhibited book editions, for which the author was regularly also a graphic designer.

In Porto, far from Almancil, where Grass regularly exhibited, it seems that Günter Grass is best known as a writer. Many a visitor was surprised by the artistic variety of the works and the proximity to their own reality: For many people in the northern Portuguese city, having a lemon tree in the garden is also their little everyday luxury.

The German Nobel laureate Günter Grass loved Portugal. The tranquillity of his holiday home in the Algarve inspired him to produce numerous watercolours, drawings and written works. The works created there are now being presented by the Goethe-Institut together with the Günter and Ute Grass Foundation and Lübeck’s Günter Grass-Haus in the exhibition Encontros (Encounters) at the Casa-Museu Guerra Junqueiro in Porto from 2 March 2018. Encontros will run in Porto until 23 September 2018.