For the first time, the Goethe-Institut is conferring the Henrike Grohs Award for African Artists. It goes to the Cameroonian intermedia artist Em’kal Eyongakpa. The award is meant to continue the life’s work of Goethe employee Henrike Grohs who was killed two years ago by a terrorist attack in Ivory Coast.

Klaus-Dieter Lehmann, the president of the Goethe-Institut said, “In Henrike Grohs, we lost not only a highly respected and beloved colleague, but also a person who brought hope into the world through her approach and her work. That is why it is especially important to combine the memory of Henrike Grohs with a perspective that shows her in her work and will. The award has succeeded doing so in a special way as it continues Henrike Grohs’s mission: to support African artists and to contribute to international dialogue. I congratulate the first award winner, Em’kal Eyongakpa, with whom the jury made an excellent choice after a careful selection process.”

The four-member jury were in agreement: Koyo Kouoh, the artistic director of the RAW Material Company from Dakar, Laurence Bonvin, artist and representative of the Grohs family from Berlin, Raphael Chikukwa, senior curator of the National Gallery from Zimbabwe, and Simon Njami, curator from Paris, awarded intermedia artist Em’kal Eyongakpa with the first Henrike Grohs Award worth 20,000 euros. Their jury statement states: “His works of art reflect universal concerns of humanity. The multidisciplinary orientation of his praxis, which is based on knowledge of science, ethno-botany, magical realism, experimentation and utopia, corresponds precisely to the central values underlying the Henrike Grohs Award.” Eyongakpa thus clearly fulfilled the jury’s main criteria: artistic quality, communication of knowledge to others and social commitment.

Ethno-botany and technology influence his art

Born in Cameroon in 1981, Eyongakpa studied plant biology and ecology at the University of Yaoundé and is an alumnus of the Rijksakademie in Amsterdam. His multi-faceted works cover a wide range of topics: indigenous knowledge systems and aesthetics, ethno-botany, applied mythology and technology. He works with both video and sound in his installations. He is particularly interested in the interface between art, shamanism and technology, which goes back to the lives of his grandfathers, who were both shamans in Cameroon. Most recently, Eyongakpa was invited to exhibit his work by biennials in Jakarta and Sharjah (2017) as well as Montreal and Sao Paolo (2016). 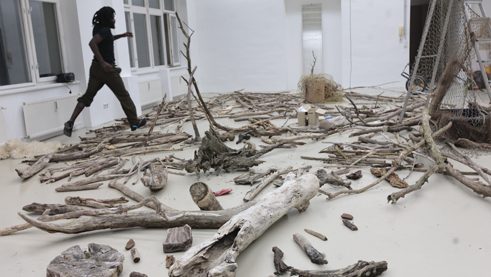 Installation „Sound grown batch #5 blue oysters at studio Efforbi II”. | Photo: Studio Eyongakpa The award ceremony took place at the Goethe-Institut Abidjan. Eyongakpa accepted the award in the presence of artists, curators, journalists, students and the King of Grand Bassam. The artists Georgina Maxim from Zimbabwe and Kaouvia Kokou Ferdinand from Togo were also guests at the award ceremony. They had been nominated for the award along with Eyongakpa. In his acceptance speech, Eyongakpa spoke of his meeting with Henrike Grohs in Bamako, emphasising that we must not yield to fundamentalism and authoritarian regimes.

Henrike Grohs and 17 other people died on 13 March 2016 in a terrorist attack in Ivory Coast. The graduated ethnologist had been head of the Goethe-Institut in Abidjan since 2013.

The Henrike Grohs Award is intended to continue the life’s work of Henrike Grohs, who dedicated her work to African artists. Starting in 2018, the award will be conferred every two years to artists or artist collectives working in the visual arts. Artistic quality is the most important criterion for the award. Collaborative partnerships, the transfer of knowledge to other artists as well as social commitment are decisive factors for the recognition of the jury, which consists of well-known cultural and artistic experts from four African countries.