Art beyond Art
Skyscrapers and Graffiti

In Brazil, there is a dispute going on over who owns art. At the beginning of April, three art historians, in collaboration with the Goethe-Institut Porto Alegre, launched a symposium seeking answers parallel to the 11th Biennial.

If the beautiful city of Porto Alegre were in Germany, it with its one and a half million inhabitants would be considered a big city. In Brazil, however, where it is located in the south, it is perceived as medium-sized. São Paulo and its surroundings have almost twenty-two million inhabitants. Rio de Janeiro has more than eleven million.

Bruna Fetter, an art historian from Porto Alegre, has clear ideas about how things could run better in her city. A few years ago, after griping about politics with a friend for an entire evening, the two of them decided to change what they could change: micro-politics. Fetter’s vision sounds modest at first: “I want more people here to go to the museums.” We are not in Europe, says Fetter, where it goes without saying. She is fluent in English and German. Ten years ago, when she was part of the production team of the Sixth Biennial that also organised the educational programme, the children came by bus with their teachers. Then the children brought their parents with them at the weekend. The Biennial became an educational institution, of which there are too few in Brazil. “The Biennial can create publicity,” says Fetter. 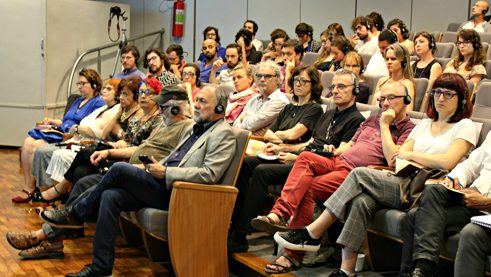 She is not alone in her opinion. Together with two colleagues from the university, Professor Maria Amélia Bulhões and the doctoral student Nei Vargas da Rosa, she has submitted a counter-proposal for the Biennial to its advisory board. Education should be at the centre of this alternative biennial. One advisory board member supported the proposal; the rest rejected it. The directors were not open to experiments because there had been a scandal in 2016. They had longed for a gigantic spectacle and planned the biggest biennial in the history of the city. They were left with a deficit running to the millions and complaints by many artists whose works were ordered and never picked up. Now many feel that this year’s edition is again a foreign body with international artists and little connection to the city.

What makes the case of Porto Alegre special is not that there is criticism of the Biennial, but that it sought a forum. The success of taking the debate to the public was nonetheless surprising: together with Marina Ludemann of the Goethe-Institut in Porto Alegre, the three art historians created a symposium that took place in parallel to the opening of the Biennial in April. “Art beyond Art” was the title, and it was very popular. The contributors came from seventeen universities, mainly from Brazil and Portugal. More than a hundred listeners enrolled in a city where most have other things to do during the day than attend conferences and no longer like going out in the evenings. 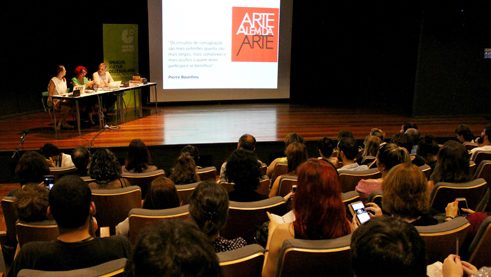 “Who decides what art is?” asks Maria Amélia Bulhões at the conference and meant it very seriously. A few days after the conference, the prestigious SP-Arte art fair takes place in São Paulo and Nei Vargas da Rosa can also be found with a stack of survey forms that he distributes to dealers and gallery owners. “Does the art market promote collecting in Brazil?” He is writing his doctoral dissertation about Inhotim, the famous open-air museum and centre for contemporary art that the entire art world is presently worried about.

In short, people in Brazil are arguing about who owns the art. The middle class? The upper class, the banks and investors? Is there any hope at all that art institutions can offer public art even to the poor?

In any case, the three art historians from Porto Alegre do not want to resign themselves to staring at the art world as if it were a magic hat and admiring the rabbits that are pulled out of it. The field has to offer more: a look behind the scenes, explain the tricks, reveal the false bottoms, allow people to take the stage themselves. They are receiving support from many sides, for example the Mamute art gallery. Why is a gallery giving away money for a public conference? “Because I think it’s great,” replies founder Niura Borges. In her space, she invites students to present their work. Then they can discuss it.


„Skyscrapers and Graffiti“ by Julia Voss was published on 22nd April 2018 in the Frankfurter Allgemeinen Sonntagszeitung. This is an abridged version.

On the occasion of the 11th Mercosul Biennale, the Goethe-Institut Porto Alegre, together with the Art Faculty of the State University Rio Grande do Sul, organized a three-day international symposium on systemic relationships in art entitled "Art Beyond Art". The interdisciplinary symposium helped to understand the changes that the visual arts have undergone over the years, especially under the influence of related agents and institutions.