This year, Karl Marx turns 200. In the run-up to the anniversary, the Goethe-Institut Buenos Aires organised the birthday celebration Marx Nace together with the Argentinian Teatro Nacional Cervantes. The theatre let the writings of the great thinker speak for themselves.

The theme of the fourteen-hour-long action at the Teatro Cervantes with over 22 events is “back to the roots.” Back to what Marx actually wrote, said, and lived. Even before it began, the unusual format and the sensational advertising campaign led to controversial debates. One hit a nerve: “Tell me, thou mortal, whence cometh the wind, or has God a nose in his face, and I will tell you which is right and left. Nothing but relative concepts...,” wrote Marx in Scorpion and Felix. 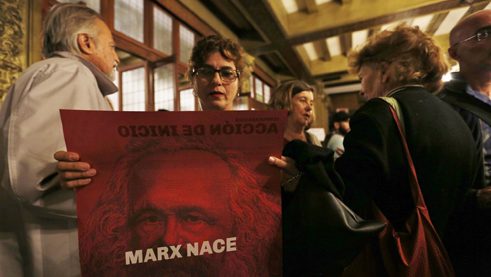 Throughout the day, around 5,000 visitors attend the varied programme of annotated readings on “Marxian Conversations” to performances of his fiction and “proletarian” concerts in the rooms of the only national theatre in Argentina, all curated by Fernando De Leonardis and Carla Imbrogno. Those who’d rather not give up their Saturday routine of shopping and TV explore the bookshops in the foyer or watch part of the nine-hour film News from Ideological Antiquity by Alexander Kluge. If that’s too long, they can be content with the short documentaries by the Rosa Luxemburg Foundation, which co-supported the action in solidarity.

Pablo Nocera, one of the many renowned experts of the day who deal with Marx in their daily research, talks about Marx’s youth and reads from his German–French Annals. But what’s striking is that the audience by no means consists only of an older demographic as might be expected in Germany, but that young people and young students in particular fill this space to the last standing room. 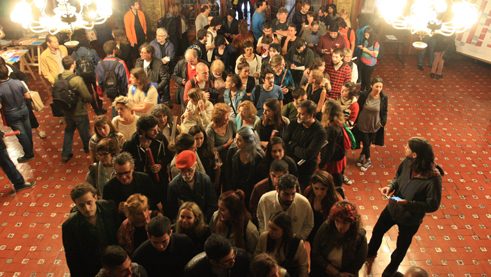 Tearing down a legend

Nocera’s lecture is followed by the first major crowd puller: a Marx reading by the television philosopher Darío Sztajnszrajber interspersed with music by Lucrecia Pinto and her band. Sztajnszrajber is well known and very popular here; on YouTube his lectures often have well over a hundred thousand views and the large hall in Teatro Cervantes with about 1,000 seats is also packed. He has resolved to deconstruct all of the Marx spectra in a sort of philosophical performance. The band comes in again and again to play roaring rock songs.

The thematic block entitled “Spot on Marx” demonstrates that theatre is not just a place for thinking, but for action. The artist collective La Columna Durruti presents fragments of the humorous novella Scorpion and Felix in a comedic, whimsical performance. A clay-like, 57-kilo Marx bust is processed with fresh vegetables until it becomes deformed. A legend is torn down. 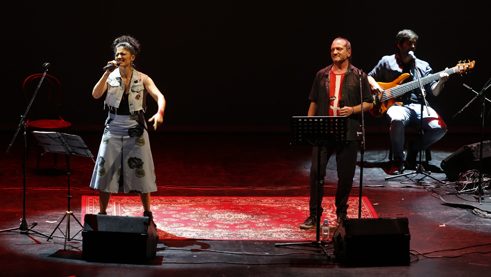 The artistically creative side of Marx

Selected poems and epigrams by the young Karl Marx are recited the author, actor and drag artist Naty Menstrual, followed by the Vigna-Möller-Remec trio, which presents part of the unfinished play Oulanem with guitar and violin music. We can assume that hardly anyone in the audience was familiar with this artistically creative side of the philosopher, thus in content and form the performances are an ideal counterpoint to the discursive events.

At the end, the curtain opens once more for a concert by the tango group 34 Puñaladas. The musicians interpret selected “proletarian” tangos, which are a suitable finale. There is deserved applause for Marx and his many friends.

What might an innovative, contemporary interpretation of Marxism look like? The Goethe-Institut addresses this question on the occasion of the 200th birthday of Karl Marx (born on 5 May 1818) in symposia, film series and contests at its institutes in Brussels, Moscow and Havana, among others. Starting in May 2018, the regional project Marx Now in North America is also dedicated to historical Marx and his relevance to today’s issues. In addition to symposia and film screenings, there will be installations, readings, and listening rooms focused on the theorist in Washington, New York, Chicago, San Francisco, Los Angeles and Montreal.