Actors in the production by Patricia Fagundes | Photo: Adriana Marchiori

The end-time play Tremor by Maria Milisavljevic celebrates its premiere at the Goethe-Institut Porto Alegre in two productions. It starts with Patricia Fagundes and her theatre group, followed by the version by Lucca Simas. In our interview, Milisavljevic talks about her play, which deals with the state of the world in our day, as well as migration, war and escaping from reality.

Where did you get the inspiration to write Tremor?

The inspirations for my plays are usually emotionally charged moments or events. Tremor was created in the summer of 2015. It was noon when I looked out the window and saw a group of teenagers sitting under our walnut tree, in the front by the street. I thought they were pupils and went out to offer them something to drink. When I came closer, I saw that they were refugees. A smuggler must have dropped them off nearby and they got lost. “Policia,” one said. The other pointed at his cell phone. The water bottles they had with them were empty and had Hungarian labels. They had not had anything to eat or drink since Hungary. 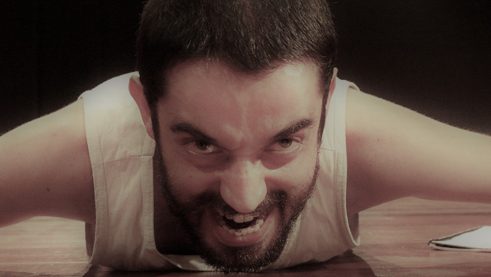 Rehearsals for the production by Lucca Simas | Photo: Alexandre Dill

“What the directors do with my script is up to them.”

You translated An Enemy of the People by Ibsen for the Tarragon Theatre in Toronto. In an interview, you said that the script had undergone several edits during rehearsals. To what extent can a translator or a director intervene in the original text?

When I translate my own plays, I make very major edits. My plays are often location and time specific, so I like to tailor them for each production. Theatrical cultures anchored in director’s theatre, such as those on the European continent or in South America, prefer to take the plays as they are and leave it to the directors to change the text. Here the translators also stay very close to the original text. What the directors do with my script is up to them. Involvement by the playwright can prevent a lot of exciting things there.

The productions in Porto Alegre will be the first in which I experience Tremor in a language that I don’t speak. This is exciting, because I have to rely more on my intuition, have to decipher facial expressions and gestures. Characters and their constellations are suddenly given new meanings as the dynamics unfold differently. I am looking forward to that.

Question from director Patricia Fagundes: What dialogues do you imagine within the Brazilian context?

Tremor contains a lot of references to specific everyday moments – computer games, sweets from childhood, childhood circumstances, actual world events, such as earthquakes, or political situations, like Angela Merkel’s reactions to a plane crash in Ukraine. These are all very subjective views. From a Brazilian point of view, the packaging-free supermarket at Görlitzer Park in Berlin is irrelevant. The dialogue would include questions like what are the narratives that our time, our here and now, prescribes? What are the longings? Some may be universal, others become more exciting and relevant due to their specificity: Not everyone in Brazil wants to hear a duet with David Hasselhoff. 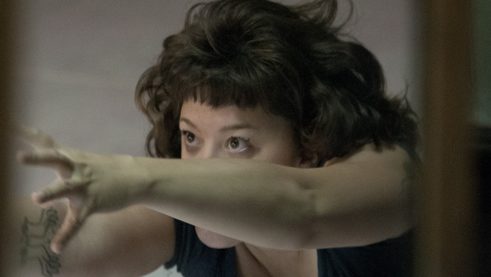 An actor in the production by Lucca Simas | Photo: Julio Appel

Question from the director Lucca Simas: How do you see the relationship between the real and the virtual?

Frightening. The virtual is not only a space of retreat, but also a rights-free, equalising, arbitrary, truth-free space. Fake and reality are one and the same in the virtual world. The individual perceives everything equally. An exploration of ‘genuine’ and ‘truth’ – as we can often explore in everyday life through our feelings, intuitions or experiences – is no longer possible for us. We are steerable. Vulnerable. Controllable. By algorithms that make us believe that we can trust them because they know us better than our parents or ourselves do. Why else does this stupid advertisement appear on Facebook at the very moment that I think of this product? I also think that the real issue here is actually expressed at the geopolitical level. Not only in terms of law and responsibility and law-free areas, but also in terms of concrete political influence. I hope we will start to see global equalisation as an opportunity as well. Like the #MeToo debate, which first found its power in the virtual and was carried from there into the world.


The interview was conducted by Michele Rolim and Renato Mendonça with questions by the directors Patricia Fagundes and Lucca Simas.

The complete interview was published on the online platform AGORA.

On the initiative of the Goethe-Institut Porto Alegre, the Brazilian theatre-makers Patricia Fagundes and Lucca Simas are staging the end-time play Tremor by Maria Milisavljevic, winner of the Heidelberg Stückemarkt. On 17 and 18 May, the production by Patricia Fagundes and her theatre group Cia. Rústica will be performed, followed on 22 and 23 May by the interpretation by Lucca Simas. Maria Milisavljevic will see both productions in Porto Alegre and hold a workshop for theatre students. Following the performance on 23 May, she will participate in an interview with both directors and local critics to discuss the theatre experiment.