The skull of Mangi Meli
“As a German, I can’t describe things from an African perspective”

Chief Mangi Meli fought the German colonial power until he was arrested and executed in Moshi in the early twentieth century. To this day his descendants believe that his skull was sent to Germany and never returned. In our interview, the actor, author and director Konradin Kunze talks about his video sculpture of Mangi Meli’s story being made in collaboration with the Goethe-Institut Dar es Salaam.

You are planning to make a video sculpture about Mangi Meli. What is his story?

A number of chiefs were active in the German colonies. There were some who collaborated with the Germans and others who resisted. Chief Mangi Meli was one of the latter and was relatively successful. For a long time there were no consequences, until the Germans returned with machine guns. Although Mangi Meli was allowed to remain a chief, he had no real power under German rule. In 1900, he and 18 other chiefs and advisers were executed after being accused of plotting against the Germans. It was a public execution, which was a big shock to many people in the region. The tree where Mangi Meli was executed is still standing in Old Moshi. 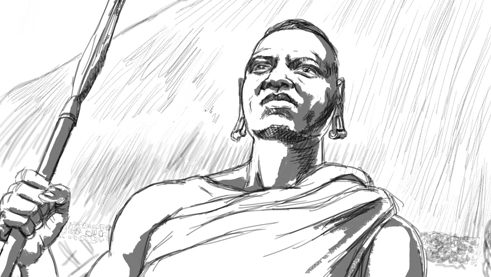 So the people don’t forget

Can you describe the video sculpture?

After Mangi Meli’s execution, his skull was sent to Germany – supposedly for scientific purposes. In Old Moshi, it is painful to many that Mangi Meli’s skull was never returned. We’re making an 11-minute animated film about Mangi Meli based on historical photos that we found in archives. The film will be projected onto a clay pot, or shards of a clay pot, because the traditional funeral rites during Mangi Meli’s time looked as if the skulls of deceased persons were kept in clay pots. It will be surrounded by a small exhibition of original documents, explanatory panels and guided tours. 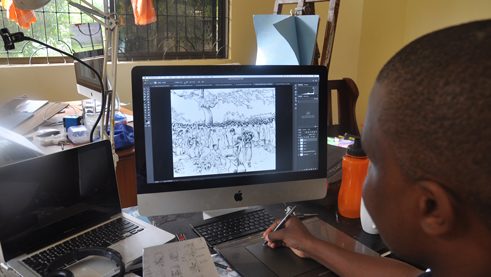 The animation is based on historical pictures | Photo: Sarita Mamseri You spoke with Mangi Meli’s grandson Isaria Meli. What was it like to meet him?

In Tanzania, Mangi Meli is considered a hero. He is celebrated as a resistance fighter because he defied the Germans. His grandson Isaria is now 87 years old and he’s afraid of course that he will soon die without having managed to bring his grandfather’s skull back to Tanzania. And he is also worried that nobody else will take care of it later; that the people will forget that the skull is probably still in Germany. After writing the script, we went to Old Moshi to talk to him about everything. To find out if it’s all in his interests and whether he has any objections. We told him about the project and the meeting went very well. He is very happy that “The Skull of Mangi Meli” will also be exhibited sometime in Old Moshi. 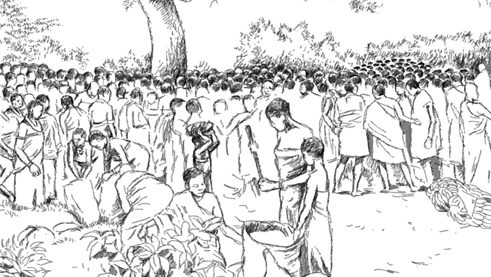 A central place of remembrance

You are working closely with Tanzanian artists on this project. How was the creative exchange?

On this project, it was very important for me not only to present the archival materials I researched in Germany as facts, but also to use as many stories as possible that are heard in Tanzania. As a German, I can’t describe things from an African perspective, so it was important for me to work with as many Tanzanians as possible who were able to correct me, help me and to take the project in a different direction. Sarita Lydia Mamseri was a good partner. Not only did she rewrite the script with me, she also made contacts with the Tanzanian artists Amani Abeid and Cloudy Antonio Chatanda.

What phase is the project in right now?

The drawings by the two artists are almost finished; only a few corrections need to be made. We are now in the animation process, which is much more complex. In October, the exhibition will finally premiere at Humboldt University in Berlin. Then it will travel to Dar es Salaam, where it will be shown at the Goethe-Institut. After that, the exhibition will be on display in Old Moshi where the tree is on which Mangi Meli was executed. It should become a central place of remembrance, which I hope will last a long time. 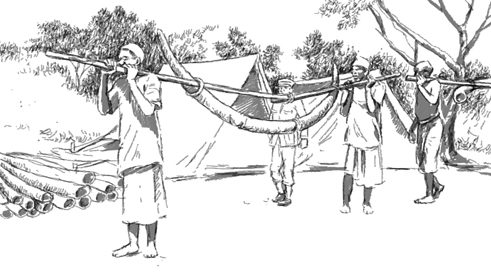 The video sculpture “The Skull of Mangi Meli” reconstructs the possible journey of the skull of Mangi Meli. Using the example of historic figures of Mangi Meli and Felix von Luschan, it shows how academia was involved in colonial rule and its consequences. For this project, Flinn Works is cooperating with the Ethnological Museum Berlin and the Helmholtz Center for Cultural Techniques of Humboldt University Berlin as well as the Goethe-Institut Dar es Salaam and the Mangi Meli Foundation in Moshi. The installation will be on display as a temporary memorial in Berlin at Humboldt University, after which the installation will be shown temporarily in the Goethe-Institut Dar es Salaam and finally made available to the Mangi Meli Foundation in Moshi.