During the Cultural Heritage Summit in Berlin, European experts exchanged views on cultural heritage. During the main event, Johannes Ebert, the Secretary-General of the Goethe-Institut, spoke about the importance of projects for young people and the opportunities and challenges of immigration and integration.

A large bronze horse towers over all the visitors in the atrium of the Allianz Forum Berlin. With this work of art from 1997, the Italian object artist Mimmo Paladino wanted to honour "humankind's oldest companion." In the shadow of this statue, the main event of the one-week summit, Sharing Heritage – Sharing Values, was held. 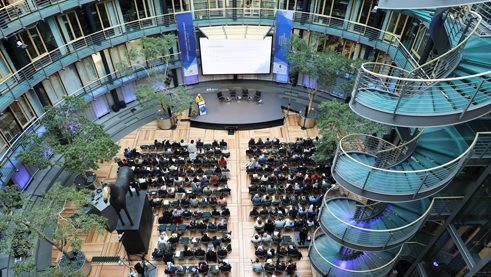 As part of the European Year of Cultural Heritage 2018, Europa Nostra, the Stiftung Preussischer Kulturbesitz (Prussian Cultural Heritage Foundation) and the German National Committee for the Preservation of Monuments organised a programme supported by the European Union consisting of workshops, clinics, panels, exhibition openings, guided tours, film screenings and much more. The main event at the Allianz Forum, the European Policy Debate, provided high-profile cultural heritage decision-makers and actors a platform to discuss the future role of cultural heritage in Europe. Johannes Ebert, Secretary-General of the Goethe-Institut, also participated in a panel discussion.

In the session on "Contributing to social and economic cohesion," he spoke with Petra Kammerevert, Member of the European Parliament and Chair of the Committee on Culture and Education (CULT), Francisco de Paula Coelho, Dean of the European Investment Bank, Ingrid Schulerud, Ambassador of the Kingdom of Norway to the Kingdom of Belgium, and Henri Swinkels, Regional Minister for Quality of Life and Culture, Noord-Brabant, Netherlands, on various contributions to social and economic cohesion in Europe. 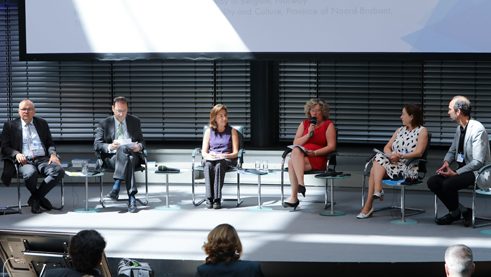 dare to ask for more funding

The participants in this panel had different approaches to and interests in the topic of cultural heritage. As the moderator Themis Christophidou, Director-General for Education, Youth, Sport and Culture of the European Commission summarised after the first round, the focus alternated between cultural education, greater access to culture, affordable cultural events and also digitisation, which offers particularly great opportunities in this field.

The presence of banker de Paula Coelho was of great interest. Being aware of his special role in the midst of all the cultural mediators, he reiterated that culture is not possible without the necessary funding. The panel agreed on his point that cultural organisations could be more daring in their applications or demands. After all, other sectors are less reticent in asking for more funding. 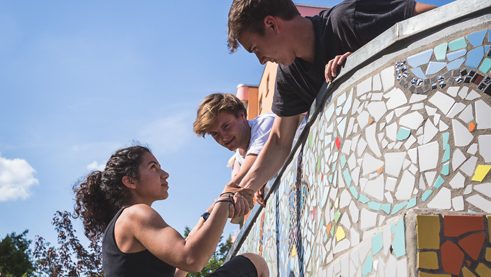 Johannes Ebert quoted the sociologist Jutta Allmendinger, who said that a society needs spaces and themes to become a community. He presented Goethe-Institut projects to the audience that deal precisely with this point. He emphasised that working with young people is very important, as for example in the Marrakech Parkour project, which was initiated together with the Institut français. Young architects met with runners and designed a parkour in the old town of Marrakech. As a result, they became better familiar with the buildings of the Medina and actively dealt with their cultural heritage.

According to Ebert, projects on cultural heritage are the starting point for dealing with our own identity, own history and own role in society. However, he noted in his closing remarks, this is not only true for locals, but also for newcomers to Europe. In Germany, people have developed a culture of remembrance that deals with their own history. This culture must be conveyed to new members of society in programmes and discussions. It is helpful for them to deal with the German or European landscape; to know the history behind a building. This too has something to do with their identity and is part of cultural heritage.

As one of the central events of the European Cultural Heritage Summit, the European Policy Debate provided a platform where high-ranking decision-makers and actors from the cultural heritage sector debated the role of cultural heritage for the future. The Goethe-Institut was represented by Secretary-General Johannes Ebert in the panel on Contributing to social and economic cohesion. A few days earlier, the Goethe-Institut had presented some of its initiatives dealing with cultural heritage, including the digital project Heirlooms. European Stories at the event Cultural Heritage for All.