During the World Cup, just before the semi-finals, a girls’ football camp called “Dribbel dich fit” was held in a suburb of Tunis, followed by a football tournament. The Goethe-Institut Tunisia invited Gina Lewandowski from FC Bayern Munich and the experienced women’s football coach Carmen Grimm from Berlin to teach at the camp.

“Football is only for boys?” Nonsense! The 18 high school students who participated in the girls’ football camp “Dribbel dich fit” came from all over the country, but girls and young women from the south of Tunisia dominated. They wanted to set an example and play football without stupid comments from the sidelines. To do so, they needed a protective framework.

To give young people interested in football access to the game, the Goethe-Institut Tunisia invited the professional footballer Gina Lewandowski from Bayern Munich and the experienced women’s football coach Carmen Grimm from Berlin to teach at the camp. Using gestures, facial expressions and empathy, they managed to convey the rules of football to the participants in German and to promote the fun of playing the game with team building games and training exercises.
It was an exciting experience for Gina Lewandowski, who said, “I had to be careful to speak slowly. And during the exercises I had to say what I was doing with the ball, so that the girls could grasp everything. If they didn’t understand something, they could understand my body language. That was a bit of a challenge for me, but an exciting one.” Carmen Grimm added, “Training always reminds me of what I should be doing as a coach: communicating things clearly, reducing what I want to convey to a minimum and making my exercises clear. That’s why I enjoy working with this target group in particular because I believe this way I can also work better with advanced teams.”

German teacher Gabriella Kraemer had come up with a special lesson to broaden her knowledge of German about football. The teens quickly learned the new vocabulary (such as “shoot,” “goal” or “penalty kick”) and put what they’d learned to use on the pitch in the evening. In addition to German lessons and football training, a cultural programme was also part of the agenda. Many of the participants, like their coaches, had never been able to visit the famous ruins of Carthage and the picturesque town of Sidi Bou Saïd or spend a morning on the beach of La Marsa. 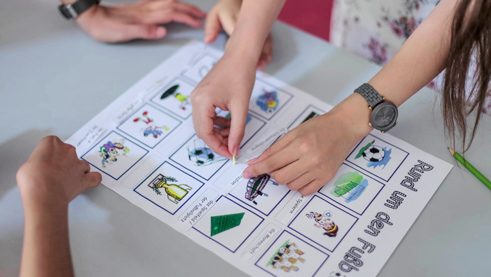 “From now on, I will play football”

The football camp ended with a tournament. Bayern Munich and Gina Lewandowski surprised all the players with a set of jerseys that they donned immediately on the pitch. The Tunisian Minister of Education and the German ambassador did not miss the opportunity to cheer on the players. The winners received jerseys from Bayern Munich bearing autographs by Gina Lewandowski, Jerome Boateng, Thomas Müller and Arturo Vidal. After the tournament, the young women kicked the ball together with the head of the Goethe-Institut language department, the PASCH team and the coaches. And they have no intention of stopping anytime soon, as one of the participants, Donia Fouzri from the Bourguiba-Tunis High School, emphasised, “What I liked most of all was that we came from different cities all over the country and made new friends. Our German football coaches taught us a lot. I never imagined that I would be able to play football. From now on, I will play football.”