The Future of Memory
“Buenaventura doesn’t give up, damn it!”

With the large-scale project The Future of Memory, seven South American Goethe-Instituts from Bogotá to Montevideo created a public space almost 18 months ago to devote themselves to the work of memory. Now the multi-day closing event Road to the Sea took place in Colombia.

When the tropical rains come, there’s no holding back: Everyone present runs under the nearby bridge, spontaneously occupy the street and together intone the slogan “¡Buenaventura no se rinde, carajo!” – “Buenaventura don’t give up, damn it!” It is the activist beginning of the project La carretera al mar (Road to the Sea) by the Goethe-Institut in the port city of Buenaventura in southwestern Colombia.

In the quarter of Isla de la Paz, the artist Liliana Angulo from Bogotá developed aesthetic tools together with Afro-Colombian residents to make visible the decades-old archive of community leader Temistocles Machado who was murdered in 2018. The archive serves to commemorate the community’s opposition to marginalisation and repression – and now it commemorates Machado himself. On the bridge wall, a mural depicting Machado’s face was made with his prophecy above: “In reality, this battle here will never end.” 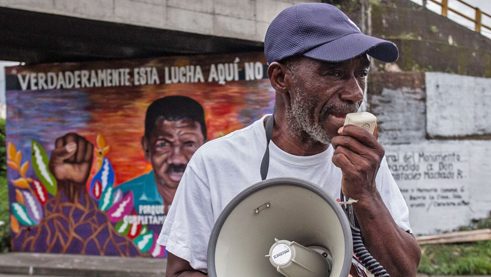 A companion of Temístocles Machado in front of a mural to his memory | Photo: Ricardo Delgado

People tell their own stories

Road to the Sea is the culmination of the large-scale project, The Future of Memory, for which seven Goethe-Instituts in South America invited artists and activists to seek creative forms of remembrance work based on their experiences of violence, terror and displacement across the continent.

The importance of this for Colombia in particular is demonstrated in the next day’s discussions at the museum La Tertulia in Cali, the third largest city in Colombia. Young filmmakers from Buenaventura report on the events in May 2017 when a general strike brought the port city to a halt for three weeks. Jonathan Hurtado of Yemajá Productions, which is presenting its documentary on the strike, says it is about letting the people “tell their own stories.” 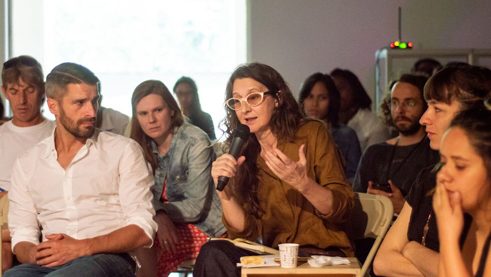 Filmmaker Lucrecia Martel in the audience during the event by Hannah Hurtzig and Karin Harrasser | Photo: Ricardo Delgado

Struggle for self-empowerment and justice

How complex the question of memory is in a country where the peace treaty has overcome the civil war-like conditions of the past fifty years, but not the structural inequality, will become clear again and again over the coming days; especially since it is still unclear how the peace process will continue under new ultra right wing President Iván Duque. Since the signing of the peace agreement in December 2016, it’s said that around 300 community leaders and activists have been killed by paramilitaries – most of them were Afro-Colombians and Indigenous people who were engaged in land rights issues.

Many representatives of these groups spoke at the many Road to the Sea events held in different places in Cali. It is above all women, like the activist Francia Márquez and the singer Nidia Góngora, who speak eloquently of their struggle for self-empowerment and justice. The need to express their own experiences of oppression and violence, and not to be represented by others, is an essential insight for future memory work. 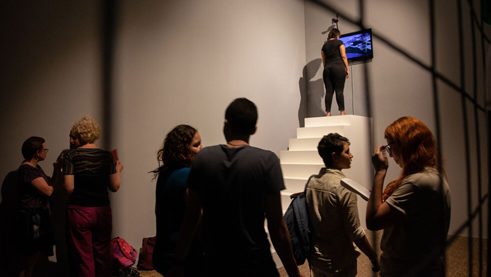 Visitors to the performance by Carlos Martiel | Photo: Ricardo Delgado

It is astonishing how intense and emotionally stirring the debates often are – even those with guests from abroad such as the artist Hannah Hurtzig from the Mobile Akademie Berlin (MAB) and the Argentinian film director Lucrecia Martel.

The artistic intervention by the Afro-Cuban performer Carlos Martiel at the opening of the project exhibition at La Tertulia proves to be the most impressive. From below, only a steeply ascending white staircase is visible, over which a screen hangs playing a sterile image presentation of the planned port reconstruction in Buenaventura. As you climb up the stairs, you end up on a pedestal with a transparent pane. Underneath stands Martiel, completely naked, penned in a tiny space for hours. The violence that blacks have suffered for centuries can hardly be portrayed more impressively.