Cities on the Edge
Robots in Pottropolis

At the pottfiction camp in Herne, Cities on the Edge, the youth theatre project by the Goethe-Institut, celebrated its premiere. The three productions deal with the reality of the working world and the existential fears of young people.

The tethers of a colourful tent city stretched across the sun-scorched meadow last Saturday. Under the motto “Dystopias – Utopias” this year’s pottfiction camp found its way into the Flottmann-Hallen in Herne. The multi-city theatre project also provided space for the first gathering of Cities on the Edge, an initiative of the Goethe-Institut, in which three youth theatre groups from Marseille, Naples, and Bochum/Herne unconventionally drafted their criticism of the labour market and high youth unemployment in southern European countries. 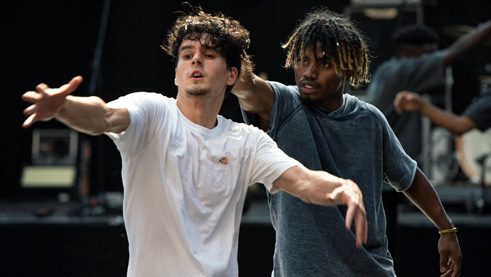 Many young people are bustling about this Saturday, dressed in loose-fitting trousers, some wearing little tattoos. The mood is exuberantly happy when Minister of State and Herne-based MP Michelle Müntefering cuts the pink ribbon to Pottropolis. A fanfare signals the start of the performance marathon. The play by the group of young men from Marseille begins unassumingly; they start making robot-like motions to trivial-sounding music. Their choreography “Opus – an artistic study of the subject of work” begins with a clockwork of twitching limbs to the throbbing heartbeat emanating from the speakers.

Despite the heat, there is a cold distance between the actors. An automatism flares in one, who wanders about wildly, hectically, and seemingly aimlessly, while another stays in place, his body swaying. While at first each dancer was trapped in their own cycle of movement, more and more friction occurs, building up in mechanized force. Their faces show uneasiness and first, perhaps final, signs of hidden humanity. Then the frenzy dissolves in warm, spherical sounds. Their movements now become smooth, animated by a zest for life. A shout of “Bravo” triggers roaring applause. 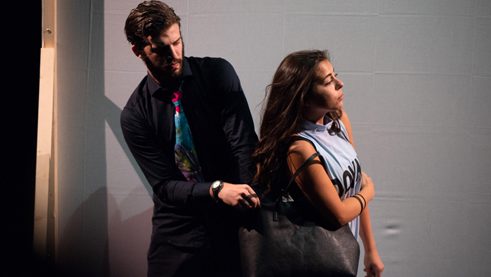 On the threshold to the outdoors, where a cool breeze billows, is an incredible sight: Figures dressed in sun-yellow robes stand silently in the courtyard, their faces covered by expressionless masks. The visitors, trying to figure out what it all means in disturbed silence, are astonished. “In the past everything was worse than today ... except for the future,” an alliance between the theaterkohlenpott Herne and the Junges Schauspielhaus Bochum seamlessly continues the theatrical series. The figures begin to wander about, eyed suspiciously as they flock together into an ever-tighter group.

In the background, a slight breeze moves the stretched fabrics. Enveloped by a mantra of reassuring words, the actors disperse. Without a word, they leave the square, drawing the audience behind them, back indoors. Flashing lights pulsate in half-second intervals around dreadful stations of meaningless sadness, where, for instance, pitch-black canvases are painted with a colour palette of blackish hues. Others randomly open and close apps on their notebooks. Finally, the masks fall and the humans appear. 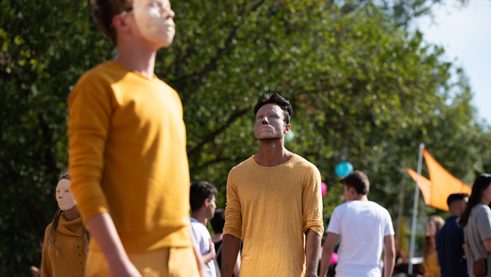 Actors performing the installation "Früher war alles schlechter als heute…außer die Zukunft" | Photo: Sabrina Didschuneit “I’m really impressed by what the young people have put together here. Both plays were very professional. Here, you feel like you’re inside a bubble of positive energy, and you can really feel the passion and love for the art. I’m curious how people will react to our play,” says Dr Maria Carmen Morese, director of the Goethe-Institut Naples. In The Kiwi of Naples, three story lines about a scientist investigating Mount Vesuvius, a stalker, and the mafia as a tourism sensation come together in a story of various fears. The play by the Nuovo teatro Sanità theatre group from Naples under director Mario Gelardi brought the beginning of an eventful theatre week in Herne to a close.

The theatre project "Cities on the Edge" is a co-production between the youth arts project pottfiction (Ruhr district), the Festival de Marseille, the Friche de Belle de Mai (Marseille) and the Nuovo Teatro Sanità (Neapel). The project was initiated by the Goethe-Institut and is funded through the German-French youth network.