Portion of Libya
Every camera a suspect

Reports on Libya are often limited to the subjects of the militia and illegal migration. Ten young Libyan photographers set themselves the goal of showing a more diversified image of their homeland. The first event was an exhibition organised by the Goethe-Institut in Tunis.

An archway leads into a narrow lane in the old town of Tripoli. Behind it are greyish-brown façades with light blue doors from which the paint is peeling. At the very end of the alley, an elderly man in traditional garb hurries into his house. Dangling power lines connect air conditioners and lanterns, whose yellow light is unable to illuminate the street. The only splash of colour in the photo is the bright red football jerseys worn by the two young men in the centre. “Libya” is emblazoned on that of the one on the left. He is not a Libyan, but one of many migrants who have found a home in the old town of Tripoli. 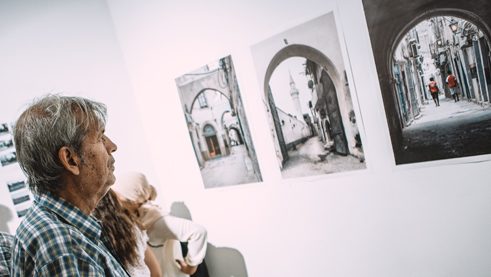 A visitor of the exhibition „Portion of Libya“ looking at pictures of Heba Alshibani | Photo: Zayene Bechir

The picture, shown in early August at the Le 15 Gallery in Tunis, was taken by the Libyan journalist and photographer Heba Al Shibani, one of ten contributors to the group show Portion of Libya. To take the photos, Heba travelled back to her Libyan homeland for the first time in several years from her exile in Malta. At the beginning of May, she participated in a one-week introductory workshop in Tunis, held by the German-French expert duo Jens Ullrich and Samuel Gratacap.

All of the exhibited photos were taken quickly, often from the car, the young woman explains over coffee the day after the exhibition. She mobilised her entire family – mother, daughter, cousins – to stroll through the old town of Tripoli and take pictures as unsuspiciously as possible. 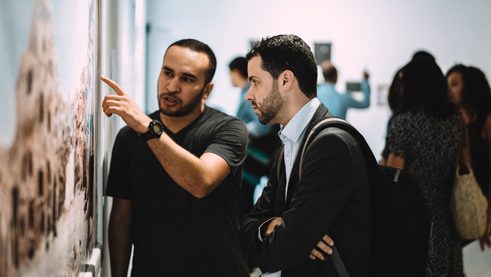 Before the city comes to life

Carrying a camera openly is not common in Libya, which continues to be controlled by rival militias. Every camera arouses suspicion. Ahmed Buhayh, who focuses on doors and windows in Tripoli’s old town in his work, reports that for safety’s sake he moved about with representatives of various militias who are in charge in the old city. They ensured that he really only photographed doors and windows, not poverty or illegal migration, as foreign press photographers usually do.

Haroon Alajnaf, in contrast, left the house very early in the morning before the city comes to life, to take photos. His photographs of a street in the coastal town of Misrata are fittingly deserted. No one lives in the bullet-ridden buildings, but the cafés on the ground floor are well-frequented during the day, the twenty-year-old tells visitors to the exhibition. 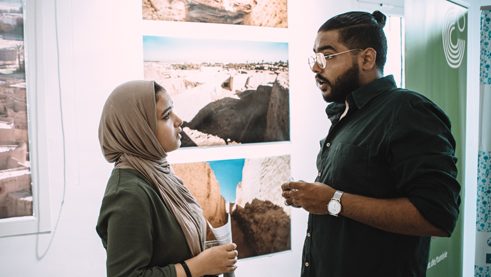 In front of closed doors

The Scout Theatre in Tripoli that Ibrahim Mokthar wanted to photograph only rarely receives audiences. Several times, the young photographer stood in front of closed doors. And when he finally did make it inside, he was surrounded by darkness. Power failures were also a major challenge during the online coaching phase of the project. Ibrahim solved the problem by not only showing photos in the exhibition, but also excerpts from his diary, which reveal how difficult it is to work as an artist in Libya – and how important.

Judith Mirschberger is the director of the Goethe-Institut Tunis.

Since 2017, the Goethe-Institut has been carrying out initial pilot projects from Tunis for Libyan cultural professionals. The Portion of Libya exhibition was created between May and August 2018 as part of the project “Architecture in Libya Yesterday and Today. A Photographic Exploration” funded by the German-French Cultural Fund. It is the first cooperation project between the Goethe-Institut Tunis and the Institut français de Libye.