bauhaus imaginista
A Mosaic of Fragments

The next bauhaus imaginista exhibition Moving Away – The Internationalist Architect has opened at Moscow’s Garage Museum of Contemporary Art. In it, the curatorial team illuminates the forgotten work of the former Bauhaus director Hannes Meyer.

The bauhaus imaginista project traces the tradition of the Bauhaus beyond its working history in Weimar, Dessau and Berlin from 1919 to 1933. Using a multi-perspective approach, it understands the Bauhaus – a phenomenon that would fundamentally shape modernity – as a complex international fabric. The focus is on diverse but long-neglected relationships of European Modernism and movements in Asia, Africa, North and South America. The aim is to depart from the Eurocentric narrative perspective and thus make new narratives visible. 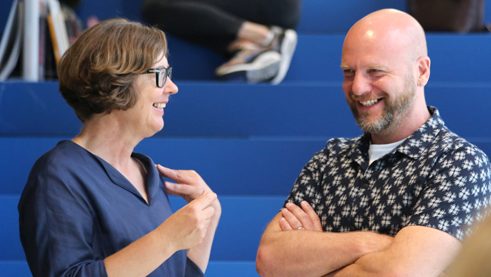 Escape to the Soviet Union

Each bauhaus imaginista exhibition is based on a specific object developed by Bauhaus masters and students. The Moscow chapter Moving Away – The Internationalist Architect takes a collage by Marcel Breuer as a starting point for how the Bauhaus, with its maxims of design, but also its political orientation, was further developed by actors in the former Soviet Union.

The exhibition centres on the architect and urban planner Hannes Meyer. As successor to Walter Gropius, he had taken over the office of director of the Bauhaus in 1928, but was fired in 1930 because of his ideological and political activities, and then emigrated to the Soviet Union together with a group of Bauhaus students. 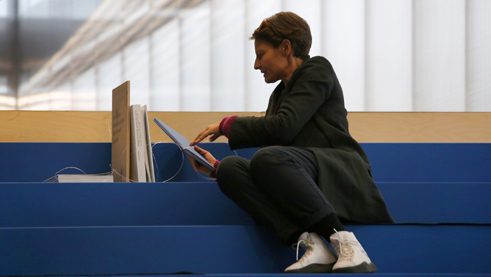 In the ensuing years, Meyer worked as a leading figure in communist urban planning. Defamed by Gropius and others as a traitor to Bauhaus ideas and long depicted by researchers as a technocratic functionalist, the exhibition in Moscow expands our view of the complexity and ambiguity of his work. It shows a number of his works on paper influenced by artistic developments such as Suprematism, but also highlights his questionable role within the ruling political Soviet system.

To trace Meyer’s story, curators Marion von Osten and Grant Watson and their team drew upon scattered, archival source materials across Europe, often reading between the lines. The story is thus a mosaic of fragments of the work of Hannes Meyer, long ignored by historians. 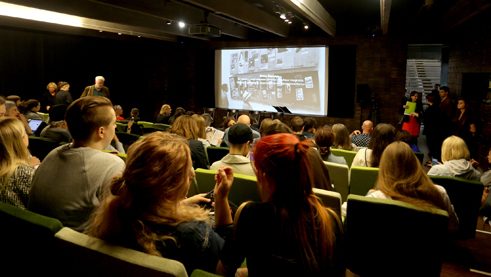 Visitors at the opening of Moving Away: The Internationalist Architect | Photo: Silke Briel

One genuine find shown in the exhibition is the work “Hamhung’s Two Orphans” (2018) by Doreen Mende. In overlapping fields of images and texts, she traces the unknown work of Bauhaus student Konrad Püschel in North Korea in the 1950s. The group later known in the GDR as the “Red Bauhaus Brigade” was responsible for the reconstruction of the cities of Hamhung and Hungnam, which had been destroyed in the Korean War – buildings that still stand today and that characterise the two North Korean city centres.

They symbolise the need to interpret the binary world order of the Cold War with its classic fronts of Washington and Moscow as a narrative of multifarious actors in changing, complex relationships. Mende’s work here accomplishes basic research in architectural history and, through poetic photographic documents from the files of Konrad Püschel, provides insights into a barely known period of North Korean history. 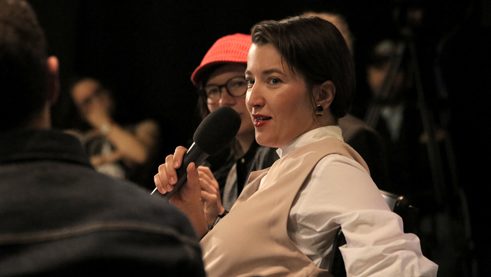 Anastasia Mityushina, Kuratorin im Garage Museum of Contemporary Art | Foto: Silke Briel Last but not least, the exhibition space, the Garage Museum of Contemporary Art, is worth a visit: The bold, frosted glass bar by OMA / Rem Koolhaas (2011-2015) basically builds on a pavilion erected in the 1960s using prefabricated concrete modules and makes the Communist past visible through a large wall mosaic and other set pieces.