Finals excitement in Bratislava: For the twelfth time, Jugend debattiert international (Youth Debates International) invited the national winners of the only German-speaking debating competition for pupils in Central Eastern Europe to the international finals. The patron of the event was the President of the Slovak Republic Andrej Kiska. 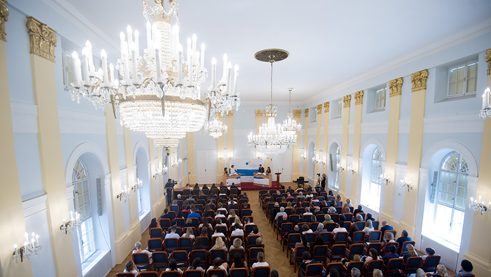 The final took place in the historic building of the Slovak National Council | Photo: Vladimir Šimíček

Now the international victory was at stake. The young people faced two debates in the international qualification on current and thematically quite different issues: “Should disposable plastic products be banned?” and “Should sexualized advertising be banned?” The eight best went on to the semi-finals the next day where the question up for debate was “Should all secondary school pupils be required to visit a memorial to the victims of tyranny and persecution?” Interestingly, three countries were represented twice in the semi-finals, including the newly participating country, Bulgaria. 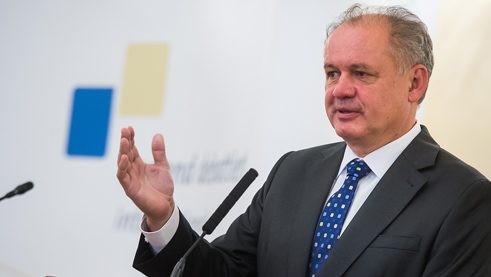 The patron of the 12th final was Andrej Kiska, President of Slovakia | Photo: Vladimir Šimíček

In the end, Denisa Ivanovová and Jana Nguyenová from the Czech Republic, Yarema-Luka Yeleyko from Ukraine and Kamil Polański from Poland qualified for the international final debate. It was opened with a speech by Bundestag Vice President Wolfgang Kubicki, which was read by German Ambassador to Slovakia Joachim Bleicher. Then the event patron, President of the Slovak Republic Andrei Kiska, spoke a few words to the participants and guests and called on young people to exercise their democratic responsibility and actively promote their values. 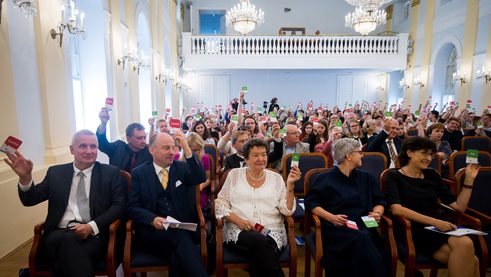 Pro and Contra – who will win? | Photo: Vladimir Šimíček In the subsequent final debate on the issue “Should broadcasters be better protected against government interference?” all four once again demonstrated the most important aspect of debating: working together and debating with instead of against each other. The most convincing debater was Yarema-Luka Yeleyko from Ukraine, who was named this year’s international winner. “I’m glad and grateful to everyone who supported me, especially my teacher Maria-Anna Vysochan,” said Yarema after the final.

A network of young people

“We are delighted that Jugend debattiert international was held in Bratislava this year to mark the 25th anniversary of the Goethe-Institut in Slovakia. Once again, I am convinced of how well this format works as a communication tool, as an instrument for networking among young people,” said Friedrich Dahlhaus, the director of the Goethe-Institut in Slovakia, after the final.