1968 and the New Right. European Perspectives
Reft and Light

Welcoming address by Johannes Ebert, secretary-general of the Goethe-Institut, at the international conference 1968 and the New Right | Photo: Bernhard Ludewig

At the conference 1968 and the New Right. European Perspectives, organised by the Goethe-Institut and Kursbuch Kulturstiftung, international experts discussed the impact of the events of 1968 on our European present.

1968 stands for a new attitude towards life: departure, rebellion, destruction of authoritarian structures. Half a century ago, the “‘68ers” set a far-reaching change of values in motion with their march through the institutions. What has remained of it? How far does the distinction between left and right sentiments still prevail? Why can right-wing populism articulate itself more strongly today than populism from the left? These questions were explored by the speakers at conference 1968 and the New Right. European Perspectives in Hamburg. The event was organised by the Goethe-Institut and Kursbuch Kulturstiftung, and hosted by the Museum für Kunst und Gewerbe, where the exhibition 1968. Pop and Protest is presently on view.

Two panel discussions and a tour of the exhibition framed the event. The focus repeatedly turned to the present political situation in Europe and worldwide, where populism, right-wing parties and sentiments are conquering more and more territory. In his welcoming address, Johannes Ebert, secretary-general of the Goethe-Institut, noted, “Not only was 1968 a European and worldwide phenomenon. The New Right has now also been organised at a global level and works in a European and global network. It is our job to deal with these new political challenges and protect our liberal values.” 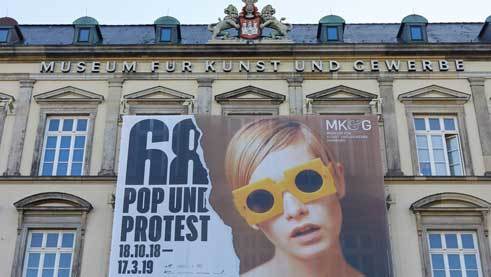 From left to right?

Thomas Wagner, cultural sociologist and author of The Scaremongers: 1968 and the New Right, analysed the perspectives and strategies of the AfD. He said, “The AfD could permanently become a stable populist party to the right of the Union if it occupies the issue of the social question even more and increasingly acquires a social slant.” Wagner discussed the question “From left wing to right wing?” together with the Polish historian Joanna Wawrzyniak and the Russian political scientist Greg Yudin. Wawrzyniak spoke about populism and intellectual polarisation in Poland from 1968 to today and pointed to the presently prevalent anti-Semitic climate in her country. Yudin also took up the dangers of populism, but noted that the present political regime in Russia is not populist in the respect that its leaders are not close to the people and do not seek out a conversation with the population. 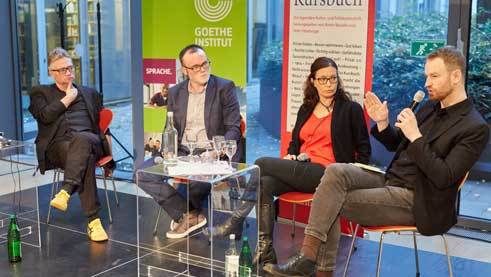 The second discussion round “1968. What’s left?” also offered many highlights and leaps of thought. The Munich sociologist and Kursbuch editor Armin Nassehi explained the “implicit left” effect of 1968 on society, namely that education was also made accessible to children from educationally disadvantaged backgrounds, thus putting an “inclusion dynamics” into motion. The historian Emile Chabal sketched out the development of the French right wing after 1968, while the filmmaker Christina von Braun explained to what extent gender relations changed in 1968. The audience also participated with questions, some of them very emotional. Some of the participants had experienced 1968 as young adults. 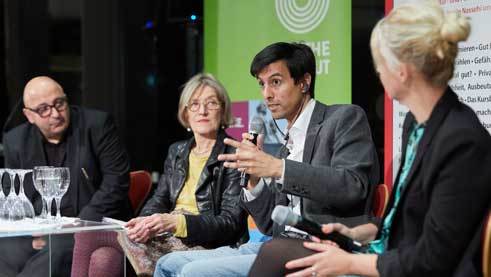 Between pop and protest

A tour of the exhibition completed the programme. The show, which features many multi-media effects, not only reflects the political events of 1968, but also vividly illustrates areas of life such as living, design and fashion. One large room contains the legendary canteen of the news magazine Der Spiegel, which the publisher had donated to the museum after its move to the harbour city. A torrent of orange and brown hues, designed by Verner Panton of Denmark, offers a nostalgic look back – a lifestyle milestone between pop and protest. 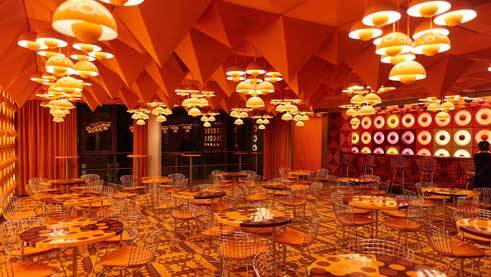 The orange-coloured Spiegel canteen was a gift to the museum | Photo: Bernhard Ludewig

The conference 1968 and the New Right. European Perspectives is a collaboration between the Goethe-Institut, Kursbuch Kulturstiftung and the Museum für Kunst und Gewerbe in Hamburg.