Reopening of the Goethe-Institut Oslo
A Beacon for Culture

The new Goethe-Institut in Oslo is inaugurated | Photo: Jan Khür

On 10 January, the Goethe-Institut Norway celebrated its reopening with about 170 invited guests. The dedication ceremony in Oslo also focused on international cultural and educational policy.

Attended by the secretary-general Johannes Ebert, Rebekka Borsch representing the Norwegian cultural minister, Alois Karl and Thomas Erndl of the German Bundestag, architect Bodil Reinhardsen, writer Erik Fosnes Hansen and many others, the evening was all about the dedication of the new Goethe-Institut in Oslo. The jazz sounds of the German-Norwegian trio Fly Magic musically accompanied the evening. Located on the Akerselva River, yet centrally located in the bohemian district of Grünerløkka, Reinhardsen created a bit of urban office culture here with lots of glass, oak, raw steel and spacious working islands during the extensive renovations of an area of around 400 square metres.

An open space for encounters

“The new Goethe-Institut aims to be an open space for encounters, learning, reading, events and discussions,” emphasised Johannes Ebert in his opening speech. There are so many issues that one country alone cannot solve. “These must be discussed together,” the secretary-general of the Goethe-Institut averred. Ebert especially thanked the Norwegian partners – institutions, festivals and museums, for example – who are instrumental in the success of international cultural work. Bundestag member Alois Karl also pointed out the financial side of successful cultural work. “Nothing works without money,” he said. “We try to invest well and correctly. And that includes cultural policy.” 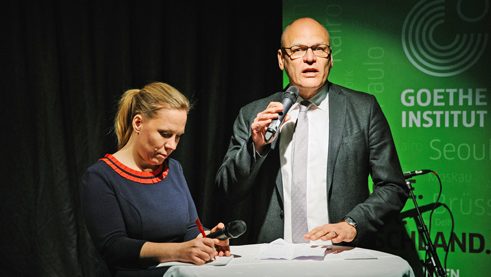 Institute director Martin Bach and the entire team of the Goethe-Institut Norway were just as happy with their move. “We look forward to the challenge of building bridges in the new environment and neighbourhood,” said Bach. “Here, we will not only be a branch of German culture and language, but represent a network of around 150 institutes with which we are in contact.” 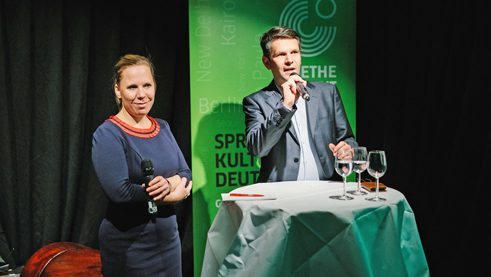 The Berlin-based Norwegian author Erle Marie Sørheim entertainingly moderated the evening programme with a focus on dialogue. “What is so important about cultural and educational policy? What appeals to you to about the topic?” she asked Bundestag member Thomas Erndl, for example. “It’s about making people curious so that new relationships arise,” said Erndl, “and also about bringing new generations beyond national borders to this understanding.” Sørheim finally asked the German ambassador in Oslo, Alfred Grannas, what’s so unique about German-Norwegian relations. “Both countries, since world orders are under pressure, have the same view on all these things, the same analysis and approaches to solving problems,” the ambassador replied. The consequence is great potential for collaboration. 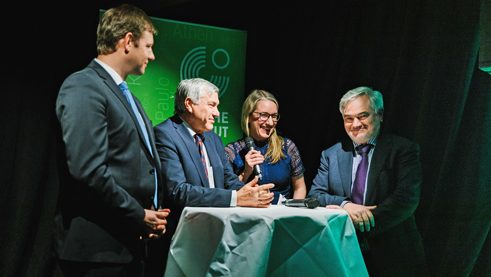 Finally, the talk by Erik Fosnes Hansen, a well-known author in both countries, sparked infectious laughter when he talked about how difficult it can be for a Norwegian to learn German. “Why on earth does this language have dative and accusative?” It wasn’t until he stayed in Germany that he was able to reconcile with the grammatical pitfalls. “When I came to Germany at the age of 19, I suddenly realized: It’s a wonderful language.” In closing he expressed his hope that the Goethe-Institut Norway will continue to act as a beacon for culture. “We need this more than ever.” 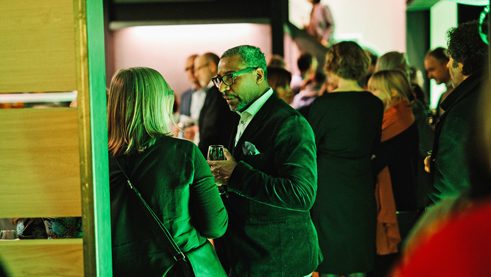