The Chinese documentary filmmaker and activist Popo Fan is committed to the freedom of homosexuals, bisexuals and transgender people in his homeland. For the project "Cut it out" he made a short film against censorship. In an interview with Goethe aktuell, he talks about how he deals with the topic of censorship and the goals he pursues with his films.

How did you come to Berlin?

I came to Germany to have a break from all the political stress in China and see what I can realize here. I hated Beijing, where I lived until then, because the city was extremely gentrified and there is very strong political pressure. That's why I decided to leave.

What are you doing at the moment?

I’m learning German and I want to apply for a university here. I was always a big fan of German film. When I studied film in Bejing at the academy I was not satisfied because my professors were too conservative. So I am looking for more opportunities to do projects here in Germany.

You took part at the programme „Talent Press“ of the Goethe-Institut during the Berlinale. What did you experience there?

I heard about it when I was studying and someone from the Berlinale gave a talk at my university. In 2017 I was selected for the programme. It was very exciting because we had seven days of labs, workshops, talks and many networking events. I learned a lot from bigger filmmakers talking about their life and career. It is very useful when you are part of the Berlinale talents family. You have a great alumni network.

What were the challenges for your work in China?

It is still a taboo on media to show the topics of my films like homosexuality or LGBT issues. In China we don’t have a law against homosexuality, being gay and lesbian ist not a mental health issue anymore since 2001. But when you ask for more rights, they don’t allow you to do that. Demonstrations are not allowed. At Shanghai Pride, there is no pride march like the Christopher Street Day but only indoor events like lectures, film screenings or music events. For a lot of non government LGBT organisations it is very hard to organize events. The government tries to supervise them and to shut down a lot of events.
Another problem for me is financing my films. When you can’t show your films in public, you don’t get any profit from your film making. There is no national funding for film makers like me. They don’t see any commercial potential in my projects.

How do you handle censorship?

There is no exact rule what you can do or what you can’t. Censorship in China totally works based on people. If one person likes it, you can get away with it, but if another person is against it, your film could be banned. So most of the film makers try to play safe. That is killing creativity. Due to censorhip it is hard to find your audience. 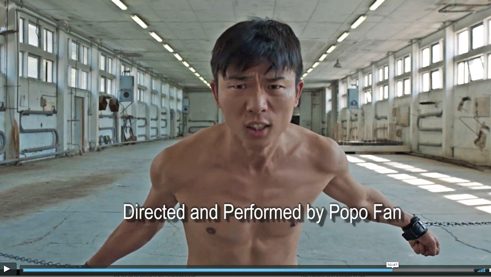 Scene from the film by Popo Fan as part of Cut it out | © Popo Fan How do you manage to show your films in China?

I work with a lot of NGOs to do screenings in cafés, galleries or LGBT centers. I often put short versions of my films online. But they are mostly removed by the censorship department in China which is very sad. My films are my children. It feels like they are cutting of the hands and the feet of my children if they censor my films.

What do you want to achieve with your work?

It is important to build a conversation between different communities. I remember after one of my screenings one person said gay peope only want sex and only heterosexuals know true love. I tried to tell him there is also true love between gay people but he did not listen to me. I can’t change such people but then I realized it is so important to meet them. It is not only me living in my little bubble and enjoying my sexual freedom. Perhaps I will be able to reach some people with my films so that they can get into conversation about them and develop more understanding. At my university I lived in a dormitory with one of my classmates who was super homophobic. I was watching queer films all the time and I recommended him some of them. After watching a few films he changed his attitude. So the film can contribute to a change. My dream is to change society with the camera.

Popo Fan is an activist and fights with his documentaries for the freedom of homosexuals, bisexuals and transgender people. In doing so, he repeatedly puts himself in danger in his home country China. In 2017 he was invited to the Berlinale as a filmmaker and took part in the Talent Press Program. Talent Press is an initiative of the Berlinale Talents in collaboration with FIPRESCI (Fédération Internationale de la Presse Cinématographique) and the Goethe-Institut and provides a platform for young film critics and journalists from all over the world to familiarize themselves with current trends in world cinema. The aim is to contribute to the training and networking of international film critics, to support cultural exchange between countries and to strengthen cultural ties.