Movaland by Slavs and Tatars
You Are What You Speak

The artists’ collective Slavs and Tatars is showing Movaland, its first solo exhibition in Belarus. At the invitation of the Goethe-Institut, the group has been illuminating the historically evolved diversity of languages, cultures and identities – issues under heated discussion in Belarus due to prevailing multilingualism and the present-day (geo-)political situation – in the Minsk Ў Gallery of Contemporary Art since 22 February 2019.

A long, shiny silver kebab spit pierces several books in Cyrillic, Latin and Arabic script on a pedestal in the current exhibition of the Berlin artist group Slavs and Tatars at the Ў Gallery in Minsk. Firmly held together, the books of the work entitled “Kitab Kebab” symbolise the diverse cultural influences of the multi-ethnic past of Belarus due to its special geographical location between Poland, Lithuania, Latvia, Ukraine and its large neighbour Russia. Slavs and Tatars tackled Belarusian history, which has not yet been appraised in depth, using linguistic phenomena to stimulate a new identity-forming confrontation among the Minsk audience and to expose the difficulties involved in it.

A visit to the National Gallery demonstrates that it’s not easy for Belarusian cultural workers to reappraise the past in the post-Soviet state. Hardly any works by local artists can be found amidst the Russian masterpieces of painting. Abstract painting or more conceptual approaches of non-conformist artist groups from the last 60 years are not to be seen. The collection of the Art-Belarus Gallery is trying to close these historical gaps, as curator Alexander Zimenko tells a guided tour. Belarusian masters of modernism such as the Jewish exiles Chaim Soutine and Marc Chagall can finally be shown in their homeland. 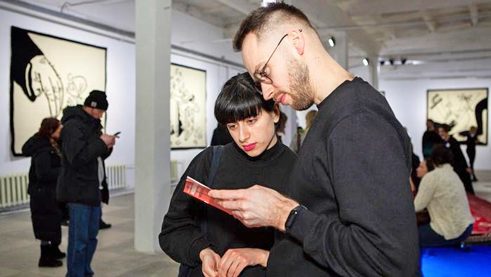 In search of interrelationships between religion, power, language and identity | Photo: Wiktoryja Kharytonawa

To ensure that their project lasts beyond the duration of the exhibition, the artists began their research in Belarus a year ago and, together with the Goethe-Institut, developed a residency programme in their Berlin studio. They’ve already invited four Belarusian artists. Payam Sharifi, one of the founders of Slavs and Tatars, enthusiastically talks about the mutual exchange of ideas and new inspirations for upcoming projects. The significance and novelty of such a programme becomes particularly clear when one considers that Belarusian cultural workers still face great difficulties entering Europe. Slavs and Tatars and the Goethe-Institut Belarus have opened up new terrain for the future with this programme. The residency programme will continue beyond 2019 and will be extended to other countries in the region. 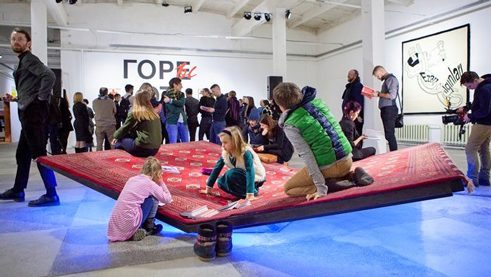 A place to come together: “PrayWay” by Slavs and Tatars | Photo: Wiktoryja Kharytonawa

Language as a political instrument of power

Before the exhibition Моваланд or Movaland opens in the gallery, Payam Sharifi holds the lecture performance called “The Transliterative Tease” in the lecture hall of the TUT.BY gallery. He presents his linguistic research on Cyrillic, Latin, Hebrew and Arabic writing in Eastern Europe and the Near East. Sharifi describes how alphabets were used or abused to delineate power and territories in different eras. The writings become a political instrument of power; subtle word and sound shifts within languages become metaphors of warlike territorial disputes and colonisation. The ongoing conflicts over the study and reintroduction of Belarusian as the official language prove that this research is of enormous relevance, especially in Belarus. 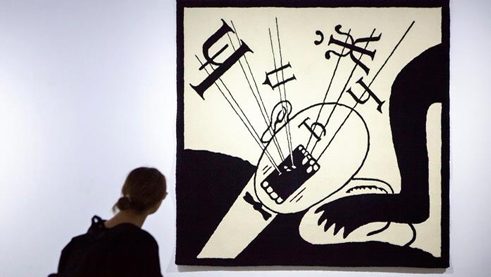 Language as a system of symbols for political, historical and cultural correlations | Photo: Wiktoryja Kharytonawa

On the following day, the exhibition is opened by the curatorial team led by Lena Prents and the director of the Goethe-Institut Belarus, Jakob Racek. The installation of tapestries, the carpet reading station “Pray Way” (2012) and a sound installation trace an arc between Sharifi’s lecture and the Belarusian context. In a subtle metaphorical way, Slavs and Tatars point to the repressed identity of Belarus in their graphic play of letters and thus touch a raw nerve of the times. The interest is also reflected in the diverse audience: Among many art enthusiasts, for example, is the philosophy lecturer Olga Shparaga, who will give her lectures at the exhibition, as well as the curator Tatiana Kirianova, who has travelled especially from St. Petersburg. Later in the evening, Sharifi, moved, unpacks a gift from an elderly Minsk Tartar. In the package, along with a box of chocolates, is a collection of old books with many personal margin notes that the older gentleman would like to share with Slavs and Tatars. This shows how this exhibition is causing ripples for a new sense of self-confidence in a marginalised Belarusian identity. 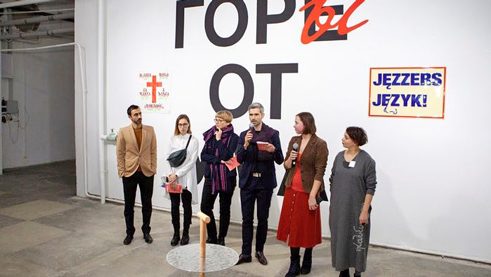 The exhibition Movaland by Slavs and Tatars is a project of the Ў Gallery of Contemporary Art and the Goethe-Institut with kind support from the Institut für Auslandsbeziehungen. Slavs and Tatars – founded by Kasia Korczak and Payam Sharifi – describe themselves as a Eurasian collective of artists, with “Eurasia” located with quite ironic ambiguity between “Berlin and the Chinese Wall.” Since 2006, the group has shed light on forgotten moments of multi-ethnic and (post-) Soviet cultural history. Its special focus is on the interrelationships between religion, power, language and identity.