Exhibition: The Power of Reproduction
Another World is Necessary

The exhibition "The Power of Reproduction" opened on 28 February at the Leipziger Baumwollspinnerei | Photo: Walther Le Kon

In the course of digitisation, reproduction processes seem to have become commonplace. But what impact do they have on art, politics and society? This question is explored by 14 Brazilian and German artists in the exhibition The Power of Reproduction, which was opened by Klaus-Dieter Lehmann, the president of the Goethe-Institut, at the Leipziger Baumwollspinnerei on 28 February.

The College of Graphics and Book Art in Leipzig was founded in 1764 as the Leipzig Art Academy and in 1900 renamed the Royal Academy of Graphic Arts and Book Trade. The old merchant city has always been shaped by the book and printing industry, making it the ideal place for the Goethe-Institut’s project The Power of Reproduction. But it all began in Porto Alegre. Inspired by the vibrant printing art scene with its clubs and workshops in the provincial capital in southern Brazil, the local Goethe-Institut initiated an exchange of Brazilian and German artists on printmaking. “We were interested in re-opening the discussion on the old question posed by Walter Benjamin about the aura of works of art and the future of artistic reproduction under the conditions of digitisation,” says Marina Ludemann, director of the Goethe-Institut Porto Alegre, on the motivations behind her long-term project. 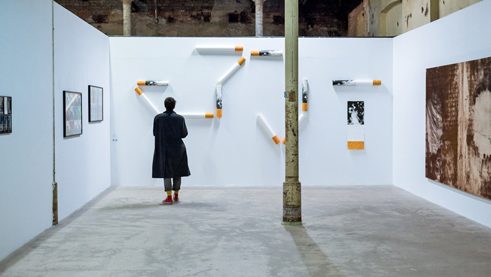 The renaissance of printmaking

The initial phase of the project in 2016 was called The Power of Printmaking. An exhibition at that time presented historical positions of Brazilian printing art from 1960 until 2015. This discourse then opened up onto the present-day under the title O Poder da Multiplicação – The Power of Reproduction. In September 2018, shortly before the Brazilian presidential elections, the second show was opened at the Museo Arte do Rio Grande do Sul in Porto Alegre. The right location for the presentation in Germany was quickly found at the legendary Spinnerei, a creative cluster of old workshops and galleries in Leipzig. At the opening, the president of the Goethe-Institut Klaus-Dieter Lehmann emphasised to the almost two hundred guests, “The influence of political events and social conditions can be read in printmaking like in no other field of art. This was the case during the Brazilian military dictatorship but also and especially in the GDR.” Presently, printed graphics are experiencing a renaissance among both established and young artists worldwide, Lehmann continued, “Artists are reinventing the age-old technology, experimenting with digital media and new materials. Many artists use the process of printing in the broadest sense to open up new spaces politically and aesthetically.” 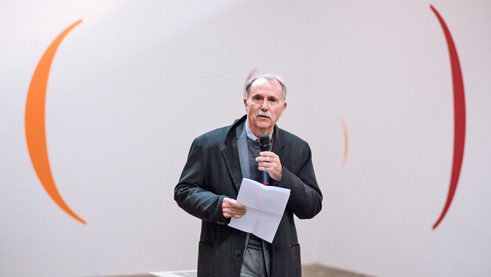 Gregor Jansen, director of the Kunsthalle Düsseldorf and curator of the show, selected 14 Brazilian and German artists who demonstrated that the seemingly ancient technology has lost nothing of its fascination in the age of digitisation. It can be used for classical educational purposes as the Berlin artist Thomas Kilpper shows with his work “Another World is Necessary.” He “printed” a panorama of Brazil’s violent history with his feet on a canvas from motifs he had previously carved into the parquet floor of the Brazilian artist's villa Flores. Or it can be used for the purposes of the post-digital generation as the Aachen artist Tim Berresheim does with his work “The Early Birds (Sigh) Traces” by transferring graphic works into a three-dimensional and illusionistic space that can be accessed via an app. 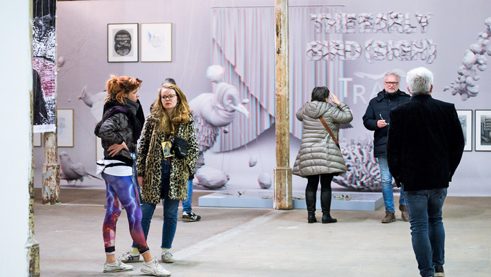 Interventions in the urban space

Even Regina Silveira, the 80-year-old Grande Dame of contemporary Brazilian art, came to the opening show in Leipzig. She crosses traditional graphic techniques with newer industrial printing techniques such as offset, heliography and microfilm to address questions of light and shade, presence and absence, power and domination. In a computer game called “Aura remastered” developed in collaboration with scientists from the Universidade Federal do Rio Grande do Sul, players can assume the role of a street artist and try to overcome an obstacle course with the help of collage and printing techniques. Two interventions in the urban space by the artist Xadalu aimed at drawing attention to the fate of the Guarani with graffiti and murals were removed by law enforcement officers shortly after their installation. In Leipzig this demonstrated how the antiauthoritarian and democratic impulse of printmaking still has an impact today. 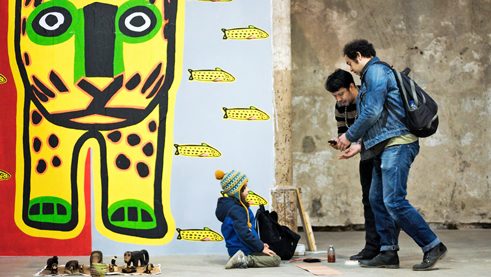