How could it come so far?
Explaining climate change without despairing

"Why finish school, if we are destroying the planet?" | Demonstration for the Global Day of Climate Strike on 27th September 2019 in Madrid. | Foto (Detail): © Inés Más de la Peña

As a climate activist, you have most likely encountered people who are difficult to argue with. In this article, we will show you how to counter the claims of climate deniers with simple arguments. Please make sure you read it!

We are on the verge of a climate catastrophe. Yet there are still people who do not realise this, and if you have ever met one of them, they have probably questioned everything you said. This has happened to us far too often already, which is why we wrote this blog post: to give you arguments that will arm you for any conversation about climate - even with the most difficult of interlocutors.

“I do not deny that climate change exists. But I am sure that the climate will recover on its own.”

This sentence was uttered by none other than former US President Donald Trump himself. And yes, our Planet has of course experienced climate fluctuations in the course of history that occurred “of their own,” but that does not mean that the one we are going through now (global temperature has risen by 1,1ºC  since 1880) is also one of those. 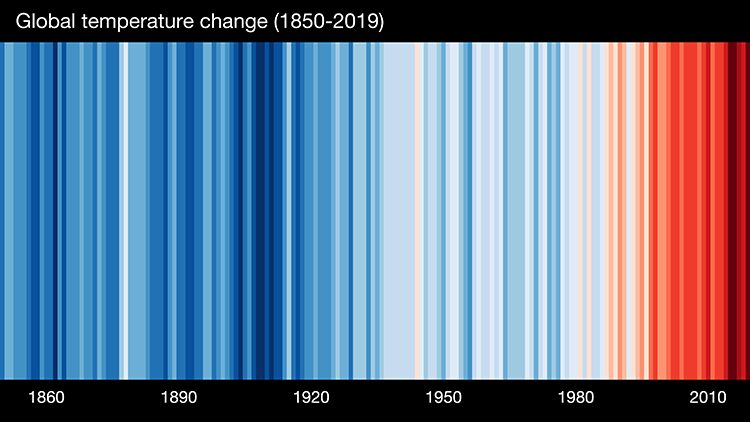 global change of temperature | Quelle: Ed Hawkins, climate scientist (University of Reading) | CC BY 4.0 Humans started burning fossil fuels (coal, oil, natural gas, etc) during the Industrial Revolution in order to generate energy, which increased the quantity of gases emitted into the atmosphere exponentially. These gases, such as CO2, are called greenhouse gases and there is a direct correlation between their emission and the rise in temperature, as can be easily observed by comparing the two graphs below: 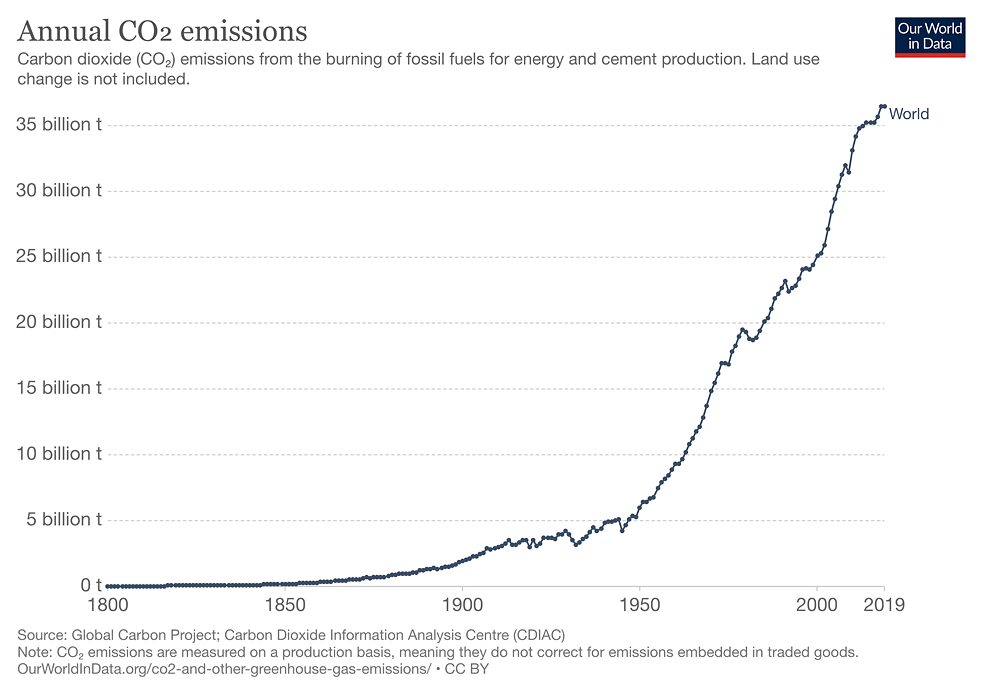 annual CO2 emissions | Source: Our World In Data, an organisation that posts publications online with data and empirical research that show changing living conditions around the world. It was developed by the Oxford Martin School at the University of Oxford. All information and publications are freely accessible and Creative Commons licensed.

We know perfectly well where these emissions come from

There is no doubt therefore as to what is going on and how we got to this point. Despite the shift to renewable energy sources (which is slow but steady), the energy base of our economic model has not changed fundamentally, which is why greenhouse gas emissions continue to increase. At the same time, natural areas that have kept the planet in balance until now are being destroyed as they absorb part of the CO2 emitted. 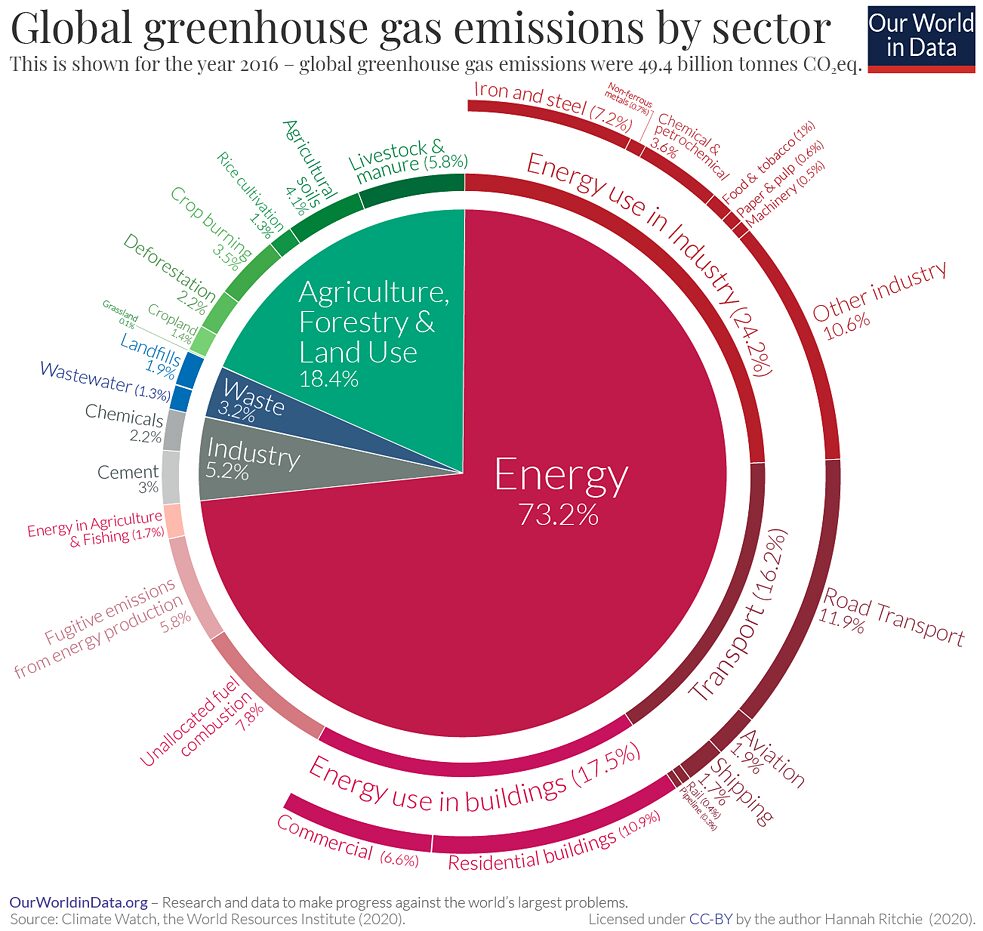 global emission of greenhouse gases divided into sectors | Source: Our World in Data As the graph above shows, nearly three quarters of global greenhouse gas emissions are caused by the consumption of energy. The lion’s share of such energy consumption is in industry, the transport of people and goods, especially road transport, and the energy we use for heating, air conditioning and electricity for our buildings. On the other hand, the food industry (based on intensive agriculture and livestock farming) not only pollutes the environment with emissions, as shown in the graph, but is also largely responsible for the destruction of nature through its extensive land use (Our World In Data, 2021) . In order to reverse the current trend, it is imperative to reform these sectors and put our economic model as a whole on a more sustainable footing.

If you are interested, you can read more about these sectors here.

It is time to act!

Many people who see how complicated this situation is get discouraged and think that there is no point in taking action for the climate. But they are wrong!

Environmental activism is very important when it comes to raising awareness and getting governments to act. For example, various environmental organisations in Spain joined forces to demand more decisive climate protection from the government precisely when the climate change law was enacted in Spain. In the words of the NGO Ecologistas en Acción [Ecologists in Action]: "This law is an important step forward", but "the commitments agreed are clearly insufficient" (Javier Andaluz, Head of the Climate and Energy Department at Ecologistas en Acción, for EFE Verde [ecological branch of EFE, the major multimedia news agency in Spanish]).

We hope that this article will forearm you for future discussions. If you want to know whether governments are doing enough to tackle the climate crisis, read next week's article by Matilde and Diogo, our colleagues from Portugal!

Almost six years have passed since the Paris Agreement, more than two since Greta Thunberg first went on strike for the climate. Where are we today? What have governments done? Are the strategies the right ones or do much more fundamental things need to change? From science to the idea of green capitalism, to the justice system and other social struggles, the first season of Blog, Engage, Act! looks at the current state of play in the climate crisis and asks whether the movements for climate justice are getting closer to their goals.

Belén Hinojar (creative) and Carmen Huidobro (environmental scientist) are content creators in the field of sustainability and founders of Climabar. They are experts in the creative use of new communication channels and in awakening and raising the climate awareness of more and more people.

Back to the Blog, engage, act dossier