© Luftwerk
Andrea Poli played two pieces from her album Sonic Antartica: the works featured sonifications of Antarctic climate data and soundscape field recordings, and an interview with geographer Hassan Basagic, who describes the “non-quantitative data” that can be gleaned from spending time with the glaciers and growing to understand them as a kind of living system. This nonhuman liveliness is reflected in Poli’s field recordings of the glaciers themselves, which are dense with organic instrumentation: Her work highlights the nonhuman musicality of glaciers, manifested in cracking ice, howling wind, and draining water. 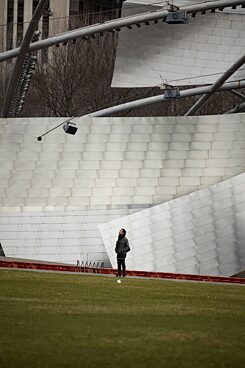 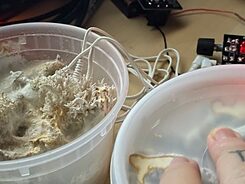 This image shows day 8 of the Pleurotus ostreatus with the electrodes. The mycelium started fruiting after it engulfed the electrodes. Electrodes are still operational | © Tosca Terán White Wanderer, which Bachmaier described as a “climate change soundtrack.” The piece was constructed from low frequency data pulled from melting glaciers and manipulated into audible range for humans. the project, which was inspired by the breakaway of the Larsen C Ice Shelf as a result of anthropogenic climate change, forces its listeners to recognize a kind of environmental degradation that is generally too slow and geographically remote to be perceived directly.

Suzanne Kite played a sound collage featuring a conch shell sextet, recordings of her grandfather, and a police scanner. As Kite describes, the piece was originally made as part of a  research project called Seeing is Believing, which focused on AI, deep fakes, machine learning, and the physical extraction of uranium. The piece ends with a digitally-generated voice reading algorithmically-generated “prayers” about stones over breakbeat samples, effectively capturing the piece’s unsettling balance of the technological, geological, and spiritual.
The event closed with Tosca Terán, who provided a live performance of what she terms “fungal bio-
nanotopia · Midnight Mushroom Music
sonification.” Her performance consisted of a container of Ganoderma lucidum, or Reishi mushrooms, that had been wired with electrodes, effectively turning the bloom of fungi into a kind of organic midi controller. That raw midi data is then interpreted by Teran through an Animoog synthesizer. This human-nonhuman collaboration, like the listening party as a whole, highlights the myriad ways in which technology can be deployed to render visible the hidden sonic landscapes of nonhuman world.