"Metamorphoses" in Moscow
The Time of Monsters

Moskau, 2017 "We are in a cocoon!” A performance of Artúr van Balen | Photo: Evgeniya Zubchenko

A 15-metre-long inflatable caterpillar hovered through Gorky Park in Moscow this weekend. The bizarre monument is a work of art by the action artist Artúr van Balen. The performance as well as the current exhibition Metamorphoses, which documents the previous actions of van Balen’s group Tools for Action, were supported by the Goethe-Institut Moscow.

The monster moved quietly through Moscow’s Gorky Park. For the centenary of the Russian Revolution, the action artist Artúr van Balen inflated a huge caterpillar. His “Social Sculpture” alludes to a quote by the Italian philosopher Antonio Gramsci: “The old world is dying, and the new world struggles to be born: now is the time of monsters.” 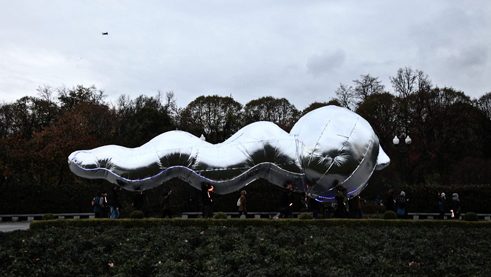 Moskau, Gorky Park 2017 „We are in a cocoon!” Performance of Artúr van Balen | Foto: Evgeniya Zubchenko Gramsci was referring to the period of political and social upheaval before the First World War. Van Balen lifts the quote into the present with his inflatable monument; a present in which many countries are experiencing political upheaval and whose futures are uncertain. Or a present like a caterpillar that may turn out to be a monster or a butterfly.

In the 1930s, inflatable sculptures were used as attractions at mass events – at first in the United States, then later in the USSR. Micky Mouse and Dumbo’s cheerful faces cranked up the Christmas business at Macy’s Thanksgiving Day Parade in New York. In the Soviet Union, inflatable drills and floating portraits of Stalin at the May Day demonstrations and the parades marking the anniversary of the October Revolution aimed to reinforce the patriotic sentiments of the working class. 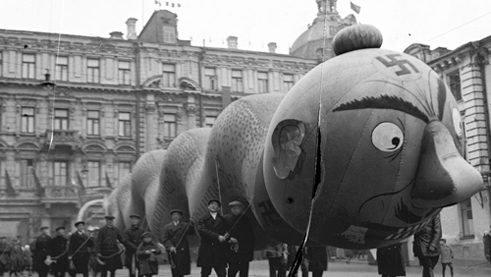 Moscow, 1934, inflatable caterpillar for the celebration of the 17th anniversary of the October Revolution. From the archives of Artúr van Balen. | Photo: Photo and Film Archives, Krasnagorsk On both sides, use was made of these seemingly harmless instruments to transport the people into a dream world, let them forget their everyday life for a moment and give them the feeling that capitalism or socialism would lead them into a bright future.

Van Balen’s floating caterpillar in Gorky Park is the reconstruction of an anti-Nazi caricature shown in 1934 at a mass event in the Soviet Union – a symbol of spectacle and the seduction of the masses.
With his group of artists Tools for Action, Artúr van Balen has been using inflatable sculptures since 2012 to highlight current social problems. The actions invite people to join in. For example, in 2016, a group of people protested against a neo-Nazi march in Dortmund with a mirror barricade made of dozens of air-filled cobblestones. 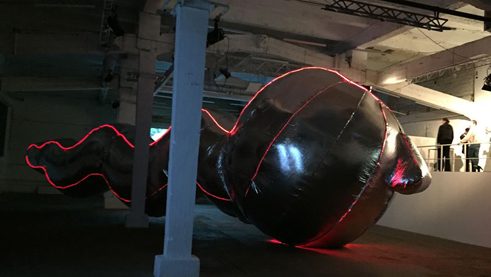 It will be accompanied by a series of interviews and academic articles outlining the future “metamorphoses” of our contemporary society and tracing the development of inflatable sculptures from advertising, propaganda and manipulation instruments into tools of do-it-yourself activism.