In the Congo, the art scene is largely dominated by men, although one third of art school graduates are women. The project Kinshasa 2050: Les femmes d’abord aims to empower female artists to have confidence in their ideas and to develop and present their own projects. The project asked Bill Kouélany to the workshop. The artist was the first woman from an African country to be invited to the documenta in Kassel in 2007.

Ms Kouélany, you are now conducting a workshop for the Kinshasa 2050 project. It’s about how artists imagine the city and the country will be in the year 2050. What is the aim of this initiative?

I think artists have to imagine themselves in the future. As artists, we create possibilities, we create the future, we create imaginary things, we open doors to horizons that may not even exist, or that need to be built. It gives me pleasure to conduct a workshop like this because it’s what I do every day: I work with young people and help them to look to the future. 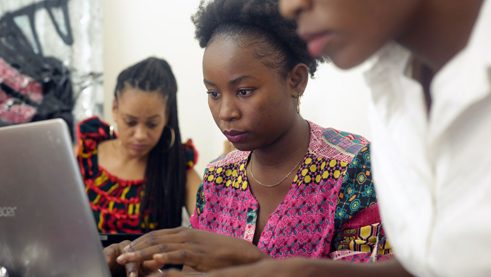 The project is focusing on women.

If the women need support, then this is the opportunity. A place committed to women that allows them to step out of the shadows and express themselves, talk about difficulties and simply express their desires. When you open up such a possibility to women, it’s just great.

In 2007, you were the first female artist from an African country to ever have been invited to the documenta. Looking back, what does that mean to you?

Personally, I’ve never categorised myself as a woman or as an African. I position myself as an artist. Having participated in this large gathering of contemporary art has nothing to do with being a woman or an African. That would be too restricted. I create art that often perplexes people because they believe that my works are by a man. That’s why I don’t position myself as a woman, but as an artist. 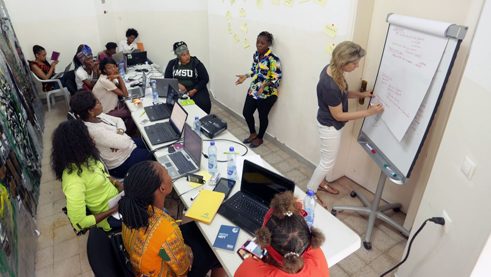 How are women represented in the current art scene of Brazzaville and Kinshasa?

Many women are inhibited and sometimes don’t get very far. I don’t know why, because to me, there’s no difference between men and women. It’s all a matter of perspective or the energy that you invest in what you want to do. But I can’t deny the reality that few women assert themselves in the arts, especially in Central Africa.

What do you think needs to be done to improve this situation?

Every September I organise an international meeting for contemporary art that offers several workshops, for example on art criticism, video, performance, etc. Last time, in collaboration with a Swiss institution, I gave four women the opportunity to receive scholarships for one year. Every month, they receive a sum of money that allows them to purchase materials. We’ll see the results in one year. 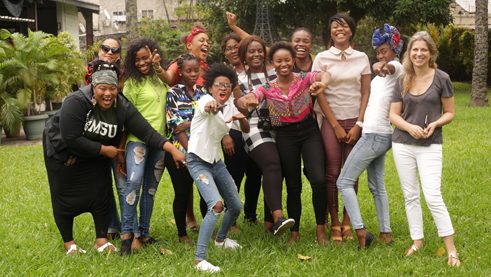 Workshop participants led by Virginie Dupray | Photo: Goethe-Institut Kinshasa/Michel Katompa If you could put yourself in the Kinshasa or the Brazzaville of 2050, what would the female artists be like then?

I won’t be here in 2050, but an 18-year-old student of mine today will be 50. I hope this workshop is a way to empower and inspire that woman. There are certainly difficulties, but everything comes from inside us. Our mental attitude is a force that moves us forward.


Bill Kouélany (born in 1965) is a visual artist, playwright and founder and director of Les Ateliers Sahm, a contemporary art centre in Brazzaville (Republic of the Congo) that promotes young artists.

Kinshasa 2050: Les femmes d’abord is a collaborative effort by the Goethe-Institut and Institut français in Kinshasa funded by the Deutsch-Französischer Kulturfonds. It is the final part of a three-year series of programmes in which the two institutes together with partners in Congo ask questions of the future. In 2016, the focus was on urban development, in 2017 on digitisation and technology and in 2018 on gender equality.