Artist Residency for Mouse on Mars
Composing in a Roundabout Way

Jan St. Werner from Mouse on Mars while composing in a roundabout way. | Photo: Michael Akstaller

Where to go with the sound? With the support of the Goethe-Institut, the electro duo Mouse on Mars will be guest in an artist residency at the MIT in Boston. They explore new sound design and mixing technologies. We interviewed Jan St. Werner about multi-perspective experimenting and composing.

Mouse on Mars have been guests at MIT since early March. What are your plans there?

We’re working on a surround sound implementation of our new album project Dimensional People. For one, we plan to set up a loudspeaker system that can distribute sounds accurately in a space through so-called wave field synthesis. We also want to work with anthropologists, cultural scientists, psychologists, ethnologists, physicists, visual artists and other people interested in sound on an alternative genealogy of sound in which several aspects of a different understanding of sound are discussed. That is, we’re working on the deconstruction of music in spatial, technical and theoretical contexts; we’re composing in a roundabout way.

What’s everyday life like in an artist residency? What are you dealing with?

Musically, we’re working directly on a spatial sound system by d&b Audiotechnik, which is being installed in a warehouse in Somerville. We experiment with the spatialisation and spatial movement of sounds, the perception of sounds and how they change in our awareness. We’ll share with various guests who are working on similar experiments. With Ben Bloomberg, for example, who’s inventing new diffusion techniques, or Nicole L’Huillier, who’s working on an interactive space that is also a sound instrument and light object. Other guests explore the cultural historical meanings of sound, space, dance, movement and waves.

You’re very experimental with your music: What are the unique opportunities offered to you at MIT?

At MIT they are very open to experiments whose applications have yet to be precisely defined. Here there are both young and experienced academics who want to share their knowledge and are open to new technologies and research approaches. As an experimental pop group, Mouse on Mars offers some starting points. Since I taught at MIT several times and know the structures of the institute, we can easily reach a large group of interested people and develop new methods of multi-perspective experimenting and composing. 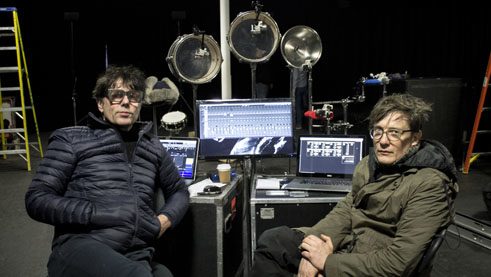 You also co-organise the Dissolve Music Symposium. What is that about?

About a year ago, together with Ian Condry, a professor at the Global Studies and Languages Department, I began to develop plans for a sound symposium that would bring together academics from around the world to explore new experimental, social and cultural issues and discuss technical models. My students from the Dynamic Acoustic Research class at the Nuremberg Academy of Fine Arts will also participate in the programme with specially developed sound interventions.

An artist residency is also about making new contacts and looking at ideas in new contexts. How did the change of location inspire you and what will you take home with you?

In addition to the technical and academic opportunities already mentioned, there are a large number of independent and private actors in Boston. The density of productivity is more concentrated than in Berlin or New York, while at the same time getting to know and cooperating with one another is unpretentious. For us, working in Cambridge provides an ultra-compressed research, learning and production environment.