During a demonstration for the decriminalisation of abortion in Argentina, a protester lifts a sign that reads “I live because I resist.” | Photo (detail): Sol Avena / Goethe-Institut e.V.

“El siglo de las mujeres” (“The Century of Women”) by the Goethe-Instituts in South America develops strategies against patriarchal structures and violence against women. For International Women’s Day, “The Latest at Goethe” spoke with the Argentine anthropologist Rita Segato.

The Argentine anthropologist Rita Segato is known in the academic world for her work on violence against women and feminist struggles. 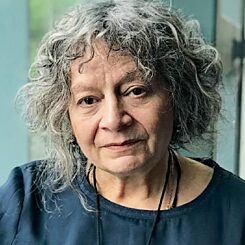 Rita Segato | Photo (detail): © Jocelina Laura de Carvalho Segato During the last military dictatorship, she went into exile in Brazil, where she worked in research and teaching for over thirty years. One of her best-known books, “Las estructuras elementales de la violencia” (“Elementary structures of violence”), is based on a study she directed of prison inmates in Brasilia serving sentences for sex crimes. Segato also wrote “La Guerra contra las mujeres” (“The war against women”) and “Contrapedagogías de la crueldad” (published in May 2021 as “Wider die Grausamkeit” by Mandelbaum Verlag, Vienna). She is participating in “El siglo de las mujeres”, a transnational initiative of the Goethe-Instituts in the South America region.

Femicides and other forms of violence against women are increasing in Latin American countries. What’s gone wrong?

We have a serious problem because passing laws is not enough; it must also be guaranteed that they will have a tangible, not merely symbolic, effect. We have not yet fully understood prevention. We thought that the most important tool of prevention was legislation, and now we realise that it is not. We have to take a closer look at where the obstacles are, at what moment they arise, by whom, through what functions.

And where are the obstacles?

In order to understand what is impeding the correct implementation of existing laws, we need to look at two areas, the police and the judiciary at all levels, in other words defence, prosecution and judiciary. A judge uses the same reasoning as a truck driver or a butcher. The “Convention for the Elimination of All Forms of Discrimination Against Women”, this remarkable UN convention, shows that there are habits that are criminal. If a prosecutor, judge, or defence attorney now carries out their duties on the basis of established habit, they are contributing to the crime.

The courts continue to judge according to the dictates of a patriarchal culture?

Certainly the judiciary is a machoistic guild, even if there are women in it, machoistic women who move within patriarchal thought patterns and don’t examine the patriarchy in their own emotional and mental world. Without examining one’s own perception and feelings, it is very difficult to evade a hegemonic system of thought, in this case the patriarchal paradigm.

How did you discover the mandate of masculinity?

I came across it while talking to rapists in Brasilia prison. It became clear to me there that these men are demonstrating something; namely that they are able to make a ritual sacrifice so that they can be regarded as members of a “male brotherhood,” a “fratria,” which I now understand as a guild within contemporary society, whereby the institutions of the guild are incorporated and the social order is threateningly undermined by the guild order.

How can this mandate of masculinity be broken?

Men’s obedience to the mandate of masculinity is one of the breeding grounds for violence. The mandate of masculinity turns men into slaves and us women into victims. Men obey this mandate because they are given a prestigious title for it: “being a man”. They are taught that “being a man” is accompanied by superiority within society. The task is to convince men that this is bad business; that what they gain by bowing to the mandate of masculinity is too little compared to what they lose in the process. It’s us women who help men to get rid of this mandate with which they suppress, rape and present themselves as superior through gestures of express or hidden cruelty – gestures with which women are deprived of sovereignty over their own bodies. I am talking about male potentials which, unfortunately, are expressed as power over women. There is no masculinity that does not display this ability to appropriate, to occupy, to dominate. This results in emotional numbness in men because they have learned to obey the mandate of masculinity.

The Goethe-Institut La Paz and La Coordinadora de la Mujer in La Paz, Bolivia are the hosts of the virtual prelude to the project “El siglo de las mujeres” from 1-3 March 2021, which is a network of actors, experts and artists that wants to promote civil society in the region of South America. More than 25 participants from South America and Germany took part in three days of the event in professional discussions, presentations and public discussions, which dealt with the topics “New anti-hegemonic role models for men and women,” “Making the achievements of women visible” and “Journalism networks”.