What is the role of art in shaping how we think about and use AI? How can artists working with AI respond to the complexities? The “AI Autumn Session”, which brought together a group of artists and researchers at the Goethe-Institut Glasgow in October 2019, was underpinned by a central thesis: alternative ways of collaborating with AI need to be found outside of the capitalist and colonist logics which currently dominate its use, and that art has an important role to play in shaping new approaches.

AI has enormous capacity to impact people’s lives in positive ways, for example its use in detecting and fighting disease. But too often today, the development and use of AI is dominated by corporate, and governmental entities, with little accountability. The logics of capitalism and colonialism prevail whereby benefits accrue for a few winners at the expense of others. From facial recognition and prediction determining the fate of individuals at borders, to deep fakes influencing politics, wetware and care-giving robots, if approached solely within the narrow logics of efficiency, profit and power AI can reinforce oppressive systems, enact violence, even result in the automation of ourselves. Furthermore, fetishisation of AI - a technology characterised by the inscrutability of its black box mechanics - is widespread. The awe it instills in the “user” is often a distraction which goes hand in hand with a sense of powerlessness to influence it.

Numerous examples of the dangers of poorly considered and biased AI have emerged in recent years, such as the notorious racial bias of predictive policing or criminal risk assessment in the US justice system. Such incidents demonstrate how AI can act as a political, economic and social accelerant. Many brilliant initiatives have been developed to address this problem among NGOs, activists and thinkers, for example The Ethical Tech Society or AI Now, and the tideswell is growing. How can artists working with AI respond to the complexities? What is the role of art in shaping how we think about and use AI?

Art can inspire deeper poetic understanding of the implications and meaning of our interaction with it, both positive and negative. In doing so art can play an important role in helping us move towards a more expansive, and potentially more equitable, relationship with AI. Artists push the technology to its limits, expose and/or celebrate flaws in its design, investigate and develop the aesthetics, challenge the technopolitics inherent in its design and implementation, explore its uncanny outcomes or the wider philosophical implications. In short, art can be fertile ground for challenging dominant logics and imagining alternative ways of thinking about and relating to AI.

The AI Autumn Session aimed to help equip participants to do just this. The approach was twofold: to support increased awareness of the critical implications of AI - the design of the interface and the technopolitics of digital infrastructures it operates within; and to encourage poetic understanding of this paradigm defining technology. Alongside self-directed presentations and workshops, participants were joined by a range of artists, scientists, academics and thinkers, here is a taste of what was explored...

The devil is in the detail

Anna Ridler at the AI Autumn Session | © Erika Stevenson
Taking a deep dive into the details of the design and exploitation of AI can be highly revealing.

Slick interfaces obscure the inner workings of technology. By forensically unpicking the process of collating and categorising datasets artist, Anna Ridler, illustrated the human labour entailed in their creation and how decisions made along the way can inadvertently (or otherwise) reinforce prejudice and privilege some people over others.

In the setting of Glasgow Women’s Library, an institution dedicated to championing marginalised stories, Ridler came together with designer and artist, Caroline Sinders, for a more expansive conversation on how to embed empathy and diverse perspectives within the design process of AI tools as part of creating fairer, and more effective, AI.

Deep Voice Orchestra by Studio Legrand Jäger | © Studio Legrand Jäger
Close analysis of patent applications for AI based products (from coffee delivering drones to remote parenting) in a workshop led by artist/design duo Studio Legrand Jäger shed light on the motivations behind the kinds of products we use today. It also gave a strong sense of the race to monetise the technology among companies such as Microsoft and IBM.

The race to exploit AI among tech startups and established companies is often based on technological solutionism rather than deep appraisal of the fields they seek to disrupt.

Burkhard Schafer, a Professor of Computational Legal Theory, demonstrated the pitfalls of such approaches through his exploration of automatisation of legal processes. As Schafer took participants on a journey charting the complex evolution of legal systems over 100s of years it became clear that hard won moral and ethical dimensions are not so easily replaced with quickly developed AI “legal solutions”.

Robotics sensibilities and what AI says about us 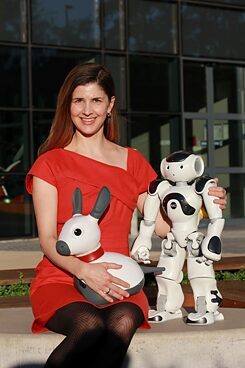 Emily Cross | © Iman Aryanfar The application of AI to robotics is a field which brings the relationship between artificial agents and humans into focus. A psychological feedback loop is created when developing robots which mimic and/or interact with us - we act on them and they act on us. Professor of Social Robotics, Emily Cross, works at the cutting of this interface. Cross shared her research into how social experience or expectations about artificial agents shape how we perceive and interact with robots. This raises complex questions, such as whether robots should be recognised as having rights alongside humans.

In recent years, research has affirmed what ancient belief systems knew long ago; life on our planet is highly sophisticated and intricate, and full of numerous forms of interdependent intelligence. “Intelligence” goes beyond the narrow Western definitions such as ability to reason. What insights might these kinds of intelligence and co-existences bring to how AI is designed and used?

Towards the end of the week, journalist and writer, Jonathan Ledgard, a passionate advocate for environment issues, discussed his proposal to use AI to attribute economic value to endangered species, such as pollinating wild bees, in order to help protect their habitat in areas where they are at risk. Arguably such an approach still positions the AI within the prevailing logics; is scenical attribution of financial value to the natural world the quickest way to halt mass habitat destruction? Would an AI inspired by other forms of interdependent intelligence come at the issue differently?

Jonathan Ledgard | © private
AI takes us into new and complex territories which demand us to think differently about ourselves in relation to machines, and wider planetary systems. To approach AI within prevailing capitalist and colonialist logics is to miss its full potential.

Artists are well placed to explore its potential both critically and creatively. If equipped with critical awareness artists can help identify points of strategic advantage in the face of limitations of dominant approaches to AI. Artists’ can also inspire deep poetic understandings of the meaning and implications of technology, shedding light on what it is to be part of the increasingly rich range of lifeforms on this planet.

Lucy Rose Sollitt is a curator, writer and strategist. She focuses on the cutting edge of artistic practice, especially the intersection of art and technology and possibilities for new artistic economies.