The DAOWO Sessions – Artworld Prototypes is a series of live online events that question the role played by art in the emerging blockchain space. | Illustration (detail): © Goethe-Institut / Studio Hyte

What benefits do blockchain technologies have for art and civil society? This is what the “DAOWO Sessions – Artworld Prototypes” of the Goethe-Institut dealt with. The Latest at Goethe spoke to the two curators Ruth Catlow and Penny Rafferty and the artist collective eeefff.

Ruth Catlow and Penny Rafferty, together you curated the “DAOWO Sessions – Artworld Prototypes”  and discussed them online with cultural professionals and representatives of art and technology organisations. You also analysed the role of art in the emerging blockchain space. How did you and the participants benefit from it?? 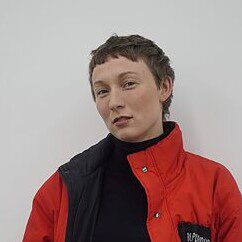 Die Kuratorin Penny Rafferty | Foto (Ausschnitt): © Hannah Rumstedt I think that the DAOWO project has increased our opportunities to live, think and work differently.
The ability to think further has always been a great strength of the arts.


At the moment, there’s a great deal of hype about NFTs, non-fungible tokens, or non-exchangeable codes. This allows, for example, a digital image to be given a unique identifier so it can no longer be copied, as would otherwise be possible with digital files. How has this discussion influenced your conception of the series? 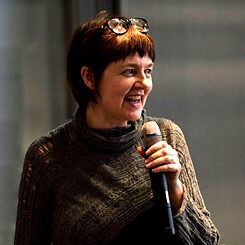 Die Kuratorin Ruth Catlow | Foto (Ausschnitt): © Ruth Catlow When we designed the DAOWO program, we couldn’t have foreseen the NFT boom. Since mid-January, everyone in the art world has been talking about NFTs, which I believe satisfy the art world’s love of financial speculation.
The work that we did with the DAOWO sessions, however, goes in the opposite direction. We are interested in speculating about a world of tomorrow instead of benefiting from the hype as individuals. It was important to us to create and imagine a world in which we would like to live and work together.

Ruth Catlow, how did you and Penny choose the projects?

Ruth Catlow: It was very important to us to bring the right people together, not specifically people who had mostly worked with decentralised organisations or decentralised technology, but a mix of creatives from different socio-political fields. We also wanted to move outside of a Euro-centred perspective, since from our own position we would have positioned ourselves fairly quickly in this European discourse.

Ruth Catlow, how did you organise the dialogue between the projects? The eponymous philosophy “DAOWO” (Decentralised Autonomous Organisation With Others) was important. What were the collaborative elements?

Ruth Catlow: Even though we weren’t together physically, we had a very good collective experience. A lot of it took place via Telegram chats, for example. In the end we filled out a paper together that works like a collective memory.

Nicolay Spesivtsev and Dzina Zhuk, you live in Minsk and, as the artist collective eeefff, have designed a live action role-playing game called Economic Orangery 2021. What’s it about? 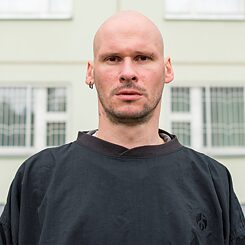 Nicolay Spesivtsev, aus dem Künstlerkollektiv eeefff | Foto (Ausschnitt): © Nicolay Spesivtsev "Economic Orangery 2021" is built around a collective idea of decentralised economic institutions in a revolutionary Belarusian situation. It’s meant to be a place where you as a participant are at a point in the future where you can gather speculative knowledge about blockchains in 2020.
The game lasts two months; there’s a one-hour online session every week.

Nicolay Spesivtsev: They were thrilled to operate in a setting where you can play with reality. The variety of experiences that the participants had was very important to us. 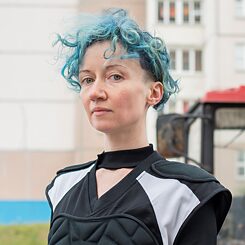 Dzina Zhuk, aus dem Künstlerkollektiv eeefff | Foto (Ausschnitt): © Dzina Zhuk Our live action role-play game is about a protest that spawns something new that we call the “present future.” This means that many multi-layer structures and many test sites are created; new types of infrastructures and coexistence. We want to try new collective narratives. It was important to be in existing, decentralised protest infrastructures. For example, there were Telegram chats that you could use to find your specific neighbourhood courtyard chat. You can think of our role play as a kind of imaginary courtyard in which we lived every two months.

What’s your vision of the future of blockchain technology for art and culture?

Ruth Catlow: Hard to say. In my understanding of technology, once it’s appeared it no longer disappears, but mutates. I don’t think NFTs will go away either. This technology will become more human. If we understand technology as part of ourselves, we may have a much more ethical and social way of existing with technology.

Penny Rafferty: Blockchain technology won’t change art and culture. But it offers another way of changing them for better or for worse through alternative systems. It’s a tool, not a saviour.

The DAOWO Sessions are part of the award-winning blockchain programme for reinventing art, the DAOWO Initiative, a partnership between the Goethe-Institut London, DECAL@Furtherfield and Serpentine Galleries. The DAOWO Sessions online series took place from 28 January to 4 March 2021. The series of events explored possibilities for the future of the art world using blockchain to find out what lessons can be learned from collaborating with DAOs (Decentralised Autonomous Organisations) and others.