© eeefff DAO as Chimera is a "science-fiction of the present-day" when all DAOs have already happened, and blockchains are "reptile" technologies. It takes the form of a long-running Live Action Role Play that unpacks the forms of value that circulate in the Belarusian cultural sphere, that experiments with the inner logic of collectivity and that creates a place to gather and preserve the speculative knowledge about 2020 blockchains.

Set in the Orangery of Extinct Blockchains where DAOs and blockchains are no longer innovative but fossil, extinct technology, relic-rationality retraining courses are causing deviations in the behaviour and the mindset of the "warmhouse" participants. The goal of this warmhouse is to suspend and unpack the apparent neutrality and progressiveness of automated financial technologies. This meta-DAO exists to provide a distant view on the cultural, tech and start-up sphere in Belarus and to unpack emancipatory potentialities of collectivities freed from constraints of project-orientation.

The People Behind the project

eeefff is a collaboration of Nicolay Spesivtsev (artist, computer scientist, researcher) and Dzina Zhuk (artist, writer). They have been active since 2013 and are based in Minsk and Moscow. 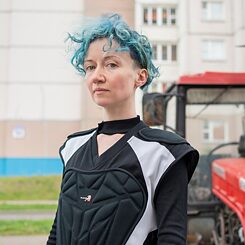 © Dzina Zhuk Dzina Zhuk is an artist and tech-politics researcher based in Moscow and Minsk. Her alter-ego bitchcoin works with voice, audio, future beats and sci-fi synth. Her major interests include jeopardized interfaces; emotional effects of algorithms; non-anthropocentric view towards machine intelligence; and imaginary scenarios of the present day. Dzina is also part Flying Cooperation and co-organises the annual event WORK HARD! PLAY HARD! in Minsk. 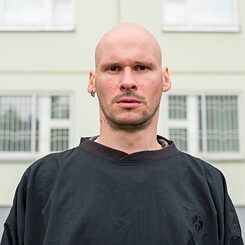 © Nicolay Spesivtsev Nicolay Spesivtsev is an artist and researcher based in Moscow and Minsk. With a technical background as a computer scientist, Spesivtsev combines a critical approach to computer science that is interwoven with computational economies and queer futurism. He works with imaginations born from overlapping technological, economical, and political landscapes in present day culture. His interests include solidarity born from affective labor, critical approaches to emancipation of joy from assemblages of bodies of living subjects (human and non-human), and systems based on computation, digital decolonialism in Eastern Europe, among many others. Nicolay is part of Flying Cooperation and co-organises the annual event WORK HARD! PLAY HARD! in Minsk.

Back to "DAOWO Global Initiative"