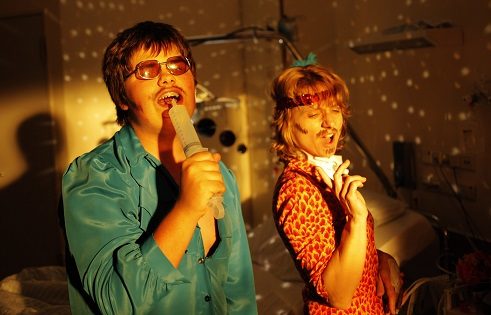 Teenager Florian Herbst is happiest when his dad isn’t at home. Then he can dance around the house with his mum, wear crazy costumes and forget all his troubles. His father, Hanno Herbst, doesn’t really know what to do with his son, who has two left hands, a big belly and is neither interested in sports nor girls. With a tender dominance, mum keeps the family’s fragile harmony in check and protects her two men from each other, until one terrible morning. When the house of cards collapses and mum vanishes from their lives, father and son are left behind. Overwhelmed, they must now learn to cope and find common ground. I Feel Like Disco - sometimes humorous and absurd, sometimes sad, sometimes fabulous.

Presented in association with Scottish Queer International Film Festival (SQIFF), promoting queer cinema and LGBTI viewing in Scotland and beyond.

We’re delighted to be screening two films for schools as part of Fokus: Films from Germany. Film is increasingly being recognized by teachers as a valuable tool that can be used to motivate and engage pupils in the classroom, and is particularly useful for modern language teaching. Showing children films from the world beyond Hollywood also helps to broaden pupils’ minds, and encourages a love of international cinema.

For S4-S6, we have chosen I Feel Like Disco, an entertaining as well as sensitive film about a boy coming to terms with the loss of his mother while facing the challenge of discovering his sexuality and coming out to his father.

Please note, these screenings are for school groups and home-schooled children with accompanying adults only. Pre-booking required!

We are particularly delighted to show this film in collaboration with SQIFF, Scottish Queer International Film Festival.  Introduction by Helen Wright (Curator SQIFF).