The OBS is a miniature parallel universe for fans of indie rock, Americana, indie pop, folk, and related genres. Although it is one of the smallest festivals in Germany, it enjoys an excellent worldwide reputation.

You can’t compare this to any other festival in the world. This is special for everybody. It’s a pleasure to be here.

The Orange Blossom Special is a tiny, three-day open air music festival. It premiered in 1997 and the organizer is not an agency, but Glitterhouse Records, a small record company specializing in indie rock, Americana, indie pop, and folk, which has been around for a while. The festival site is also the garden of the company’s building in beautiful Beverungen, a tidy little town in the Weserbergland region. But the billings have always gone beyond the company’s program. The well-connected team around label boss Rembert Stiewe offers international artists a welcome opportunity to meet their otherwise widely scattered target audience in one place – in an industrial park in the middle of Germany, in a fantastically designed garden of an old villa, surrounded by trees, small local stalls and the picturesque backdrop of the Weserbergland The OBS deliberately refrains from showcasing weird musical experiments. Harmony is also the most important guiding principle of the small crew: There are more seats and more restrooms per person here than anywhere else, there are no excessive body searches, the food prices are very moderate in comparison, and musicians stand amidst the audience to enjoy the performances of other bands. The respectful family atmosphere makes performers, audience, and staff a tight unit committed to the success of the festival. It certainly helps that the pre-sales, which only the initiated are aware of, regularly ends after a few minutes. People stick with their own; the OBS is reliably sold out far in advance every year.

This is the best gig I’ve ever had in my life. 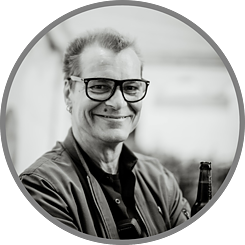 Rembert Stiewe | © Lucja Romanowska Rembert Stiewe lives in his birthplace Beverungen in East Westphalia. After graduating from high school, he did his community service, studied social sciences, dropped out, and worked in various jobs, from road construction to tennis instructor.

In 1982, he co-founded Glitterhouse Records, which in 2015 was named Best Label at the VIA! VUT Indie Awards. Since 1997 he has organized the open-air festival Orange Blossom Special (OBS), which annually gathers international bands and about 4,000 people in the company’s garden. In addition to his job at Glitterhouse, he is the managing director of Beverungen’s city marketing and a freelance journalist, also hosting the TV series “Rockpalast: Crossroads” (WDR and 3Sat) and various panels at the Reeperbahn Festival Conference.

Rembert Stiewe was born in 1964, is married, has a son and a grandson. He likes to drink beer and cheap bourbon and smokes far too many Ernte 23-brand cigarettes.

The OBS in Numbers

„An amazing festival. A memory we will keep for the rest of our lives.“ (Immanu El)

“We fell in love with the Orange Blossom Festival.” (AnnenMayKantereit)

„Fantastic festival – thanks for one of our greatest moments as a band!“ (Holmes)

“WOW! That was indescribable. We are damned happy. Thank you!” (Navel)

“One of Germany’s most beautiful festivals.” (Gisbert zu Knyphausen)

„This is the best festival ever. Ever! Ever!“ (Irving)

„One of the most fun shows we have ever played!“ (The Builders & The Butchers)

„Felt like playing in front of thousands of our friends in a giant backyard.“ (East Cameron Folkcore)

„Wow, this was really special! I loved every second of it.“ (Andrew Bird)

„Fantastic festival. Have us again this year, please.“ (The Miserable Rich)