Contemporary German-language drama is characterized by enormous variety. Many playscripts written in German are known to audiences in Asia primarily through their English translations. It would of course be far preferable to present these plays to the public in Asian languages. Those reflections are what gave rise to our project: Contemporary German-language drama in six South Asian languages – Bangla, Hindi, Marathi, Sinhalese, Tamil, and Urdu.

Contemporary German-language drama is characterized by enormous variety. It has long been and continues to be shaped by both a rich tradition and significant international influences.

Many playscripts written in German are known to audiences in Asia primarily through their English translations. It would of course be far preferable to present these plays to the public in Asian languages – in translations carried out by competent translators working directly from the German. This would also make it possible for theatre companies who operate in local languages to familiarize themselves with the current German theatre scene.

Those reflections are what gave rise to our project: contemporary German-language drama in six South Asian languages – Bangla, Hindi, Marathi, Sinhalese, Tamil, and Urdu. These translations are intended first and foremost to be used within India, but will also be available to other Goethe-Instituts in Dhaka (Bangla), Colombo (Tamil and Sinhalese) and Karachi (Urdu), and in principle to Goethe Centres and additional theatre companies throughout South Asia.

The new translations will also be included in the Goethe-Institut’s theatre library.

Preparations for the project took place between March and July 2020, focusing initially on the selection of plays and of interested and qualified translators. The mentors also prepared podcasts on various topics and plays.

Criteria for the Selection of Plays

Highlighting the work of Roland Schimmelpfennig

Writer, director, and dramaturg Roland Schimmelpfennig, one of Germany’s most widely produced contemporary playwrights, belongs to the tradition of literary drama: for him, the literary text remains the starting-point and central reference for stagings of his plays. And that’s the key connection between his work and theatre in India – for here too, (non-musical) theatre is based above all on the text. Schimmelpfennig also has experience in the area of theatre translation.

During the workshop, R. Schimmelpfennig discussed the scripts that had been chosen with the individual translators; eight of his plays are being translated into various South Asian languages. Schimmelpfennig also elaborated on additional aspects of theatre practice in relation to his scripts, thus broadening the perspective of the translators.

Dr Barbara Christ, a translator with wide-ranging experience in this area, was invited to serve as the main leader of the workshop. She provided the translators with a variety of material about the plays ahead of time, which greatly enriched their experience.

In addition to the plays by Roland Schimmelpfennig, a representative sample of scripts by other important contemporary German playwrights were made available to the translators. Works by Thomas Melle, Ewald Palmetshofer, Elfriede Jelinek, Thomas Köck, Anne Lepper, Enis Maci, and Ferdinand Schmalz. (It’s worth considering whether representatives of post-migrant theatre such as Yael Ronen or Shivan Ben Yishai might have been added in order to prompt discussion of the question of authorship in contemporary German-language Regietheater [director‘s theatre]).

Texts by other eminent Playwrights 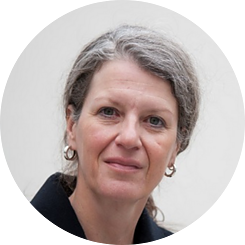 Dr. Barbara Christ pursued her academic education in Literature and Theatre Studies. She subsequently worked as a dramaturge and literary adviser and wrote her doctoral thesis on the theatre of the fragment.
Roland Schimmelpfennig 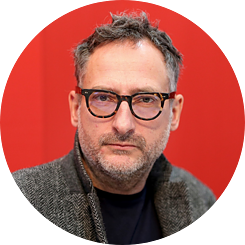 Roland Schimmelpfennig, born in 1967, is one of the most performed contemporary playwrights internationally. He worked as a journalist in Istanbul and was engaged at the Munich Kammerspiele after studying directing at the Otto Falckenberg School.
More
Sunil Shanbag 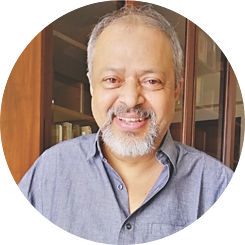 Sunil Shanbag is one of India’s leading theatre directors and the artistic director of Theatre Arpana, and co-founder of Tamaasha Theatre. Over the past 40 years, Sunil’s work across various genres of theatre practice has been engaging with and presenting the complex nature of contemporary India, on stage as well as in various alternative performance spaces.
Ramakrishnan Ramanathan 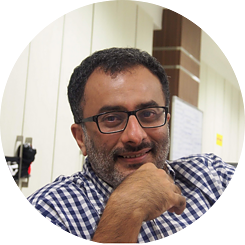 Ramakrishnan Ramanathan, popularly known as Ramu Ramanathan, is an Indian playwright-director with acclaimed plays to his credit. His list of plays includes the most recent and immensely successful The Diary of a Word, Cotton 56 Polyester 84; Jazz; Shanti, Shanti, it’s war, Comrade Kumbhakarna; Curfew; Mahadevbhai (1892–1942); Collaborators; 3, Sakina Manzil; Shakespeare And She; as well as Postcards from Bardoli.

A workshop spread over six days (January 25-30, 2021) offered ideal conditions for a conversation about the complex activity of drama translation. The aim was to provide the translators with an overview of the current state of contemporary German-language drama as well as an opportunity to work on concrete examples under experienced leadership. A great deal of thought went into the selection of the plays, involving dicussions between Dr Barbara Christ, Roland Schimmelpfennig and the GI, with the objective of putting together a menu that would be at once representative, and relevant to India.

The workshop was designed for experienced literary translators who would benefit from a more in-depth look into the distinctive features of translating for the theatre: how does dialogue function? What factors must one take into account when translating a text that will achieve its effects primarily when spoken out loud? How do playwrights create character through language? What must one be alert to in translating stage directions?

Playscripts and The Stage

The goal is to present staged readings in local Goethe-Instituts, and wherever possible at other events such as literary festivals, combined with post-show discussions featuring the translators, directors, dramaturgs and actors involved.

Back to "Contemporary German Drama in South Asian Languages"