Same sex marriage
Before the law, all are equal 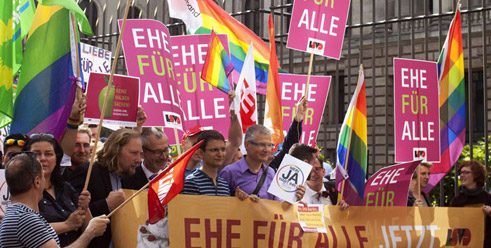 Demonstration in Berlin for “marriage for everyone”; | Photo (detail): © LSVD

In May 2015 the Irish came out in a referendum in favour of homosexual marriage. In Germany too the issue is being discussed in depth.

Marriage has for some time no longer been what it was according to the Old High German meaning of the word: eternal. About one third of all marriages in Germany end in divorce, although the Civil Code (BGB) states: “Marriage is for life”. But the traditional understanding of marriage has come under even more pressure from another side. Many homosexual couples want to be treated legally like heterosexual couples and be able to enter into marriage. The debate about this in Germany has been going on for many years. New developments such as the referendum in Ireland on the one hand, with which the Irish have committed themselves to same sex marriage, and the verdict of the American Supreme Court that the prohibitions in 14 American states on marriage between homosexuals are unconstitutional on the other, have fuelled the discussion.

Since 2001 in the Federal Republic there has existed the possibility of entering into a “registered partnership”. This is a legal covenant open only to same-sex couples and governed by a separate law. But a marriage, according to the German Civil Code, can exist only between persons of the opposite sexes.

Marriage and partnership are converging

The registered life partnership for homosexual couples is not a German invention; it was introduced in the late 1980s in Denmark. In the 1990s demands to allow gays and lesbians a form of recognized cohabitation carried the day in many countries. In Belgium and Spain laws opened the traditional institution of marriage to homosexuals. Germany followed the model of the life partnership, in accordance with the Scandinavia model. A trend may be observed almost everywhere: although marriage and partnership have been often endowed with different rights, they continued to converge. Either the legislature itself became active to this effect or it has been constitutional courts that insist upon equality in this area of life. So, for example, the Federal Court in Karlsruhe, the court that keeps watch over compliance with the German Basic Law (Grundgesetz / GG). Article 3 of the Basic Law mandates that all persons must be treated equally before the law and that the essentially same must be treated the same and the essentially different differently.

Being there, taking responsibility for each other

Are life partners and spouses “essentially the same”? Yes, the judges have said. For gays and lesbians also want to be there for each other permanently and assume responsibility for each other. Again and again cases have ended up in court in which the male and female homosexuals have sued for equal treatment, mainly with success. Life partners in Germany today therefore enjoy the same rights with respect to pensions and care issues as married persons, and can also claim their tax advantages. In legal terms equality has therefore almost been reached. In spite of, or because of, this the debate has not ebbed. Now it is about the last contentious questions. One is the issue of the adoption of children; the other is why gays and lesbians are not allowed to enter into civil marriage.

Dispute over the “right” image of the family

Adoption is a particularly sensitive issue. Not only people in the conservative camp think that a child is best looked after by a father and a mother. Research findings, however, which in 2013 the Federal Constitutional Court drew on in its judgement on successive adoption, show that children can grow up equally well with homosexual parents. At any rate, on the treatment of children and the “right” image of the family the Germans can argue passionately, as the discussion on cash benefits for families and state subsidized childcare shows. It is conceivable that the Federal Constitutional Court may here put its foot down.

For example, in May 2014 the Court allowed so-called “successive adoption”, by which a life partner adopts the adopted child of another life partner. But politicians cannot make up their minds to take the plunge, although the coalition agreement of the ruling Christian Democratic Union (CDU), Christian Social Union in Bavaria (CSU) and Social Democratic Party of Germany (SPD) states: “We know that in same sex partnerships values are practiced that are fundamental to our society”. The SPD wants to open civil marriage to homosexual couples. But the CDU and CSU refuse to go along with this. For them, marriage in Germany is still exclusively reserved for man and woman.

That this will remain so for the time being again rests with the Federal Constitutional Court. In its past judgements it has emphasized that the marriage which is specially protected by the Basic Law (Article 6 GG) is reserved to the union between man and woman. Many constitutional lawyers think that to make possible marriage for all would require an amendment to the Basic Law. For this a two-thirds majority in the Bundestag would be necessary. Homosexual associations, on the other hand, are calling for an attempt to change things without a constitutional amendment. They hope that the judges of the Constitutional Court will interpret the Article of the Basic Law “dynamically”, that is, could adapt it the spirit of times, which stands on the side of equality. This possibility cannot be excluded.

Jost Müller-Neuhof is the legal policy correspondent for the daily newspaper “Der Tagesspiegel” and lecturer at the Free University of Berlin.