Latest news
Important information about our booking flexibility as well as entry regulations to Germany.

Learn German online with help from our highly qualified instructors. Over the school term, you will steadily improve your German to best prepare you for a summer in Germany.

Face-to-face courses for teenagers at the Goethe-Institut

The Goethe-Institut offers fun summer camps for young people between the ages of 12 and 17. Here, teenagers from all over the world learn German together. Thanks to the varied leisure programme and the unique landscape of the camp locations in Bavaria and Austria, lots of fun is guaranteed.

Due to the high demand, we have doubled our offer for the summer camp in Obertauern: In addition to the Tauernhof, we now also learn German at the Alpincenter!

German youth courses for groups at the Goethe-Institut

The Goethe-Institut offers youth courses specifically for closed groups. Take part with your school class, your German course or as a group of friends and give the young people in your group a unique insight into German as a foreign language.

Online German Youth Camp without any previous knowledge of German

The Online German Youth Camp without any previous knowledge of German enables young people to get a taste of the German language. In interactive live sessions, the teenagers acquire a first minimum vocabulary with which they can directly enter into everyday communication.

In our Digital STEM Youth Camp, participants explore interesting topics related to nature and technology while learning German on a topic-related basis. In online live sessions, the teenagers experience exciting STEM experiments and can ask researchers their questions.

We have the perfect combination: online classes to go alongside school study, coupled with our exciting summer language camps! 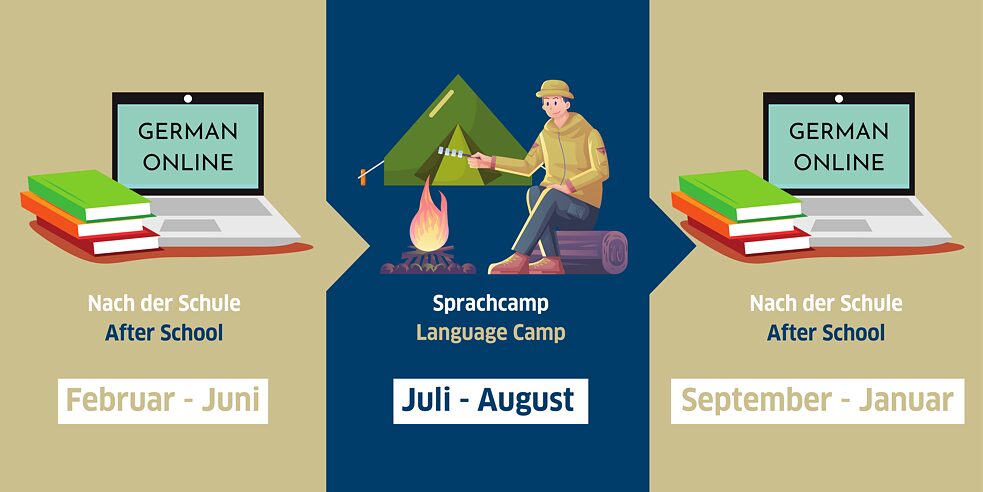 In our German Online for Teens course, 12- to 16-year-olds learning German can consistently improve their grammar, pronunciation and vocabulary at language level A1 over the course of the school term and prepare for upcoming exams. They will be supported by highly qualified Goethe teachers who are native speakers of German. The best part? Even if everyone takes the course at home in front of their laptops, the live sessions with the other teenage learners never get boring.

If your child takes our German Online for Teens course, you can rest assured that they will receive focussed preparation for learning German – regardless of where they live or what Germany’s entry requirements are at the time. And by design, the course is easily manageable alongside school study, with the teens steadily improving their German in a series of weekly live lessons after school.

with online exercises that you'll be able to organise flexibly.

through individual feedback from the teacher.

Our language camps for young people have deep roots. Every year, our youth camps offer hundreds of teens from around the world the opportunity to improve their German skills as well as exploring the country.

Learning a new language is great fun when everything comes together. Learners gain a great feeling of achievement from being able to communicate more clearly and better recognise and understand the subtleties of a language. Learning a new language is often easier for children and teens than for adults, so it is particularly worthwhile for teens to learn German at a language camp for their age group with peers from all over the world.

It is a long way from the beginners’ course (level A1) to the advanced Großes Deutsches Sprachdiplom (level C2), but younger learners can make significant progress in a short time by attending a youth language camp in Germany or Austria. In two weeks, they will not only learn the language in class – they will also quickly get to know the country and its people during their stay, for which they can choose between a huge variety of different places in Germany.

At the same time, they will learn how to live together in a group with peers from all over the world while having plenty of fun in the process. The German courses at the Goethe-Institut’s youth camps are divided into six difficulty levels that build on each other and match up with the Common European Framework of Reference for Languages’ six-level competence scale.

We take care of the safe transfer between the airport and the language camp for the arrival and departure of the young people.

The protection of your children is taken care of. After leaving their home country, all youth camp participants are protected by health insurance, as well as accident and liability insurance.

We know that the greatest possible flexibility is important to you when booking a course. To help you book without hesitation, we are able to offer you the option of cancelling free of charge for any reason up to four weeks before the start of the course.

“We manage to get along with each other on the courses in a peaceful, happy and tolerant manner – so you think to yourself: it's not that difficult and it must be possible for the rest of the world to manage!”

Hannah, 23, supervisor on the youth camps

Any other questions? We are happy to advise you: jugend@goethe.de
Top