German Series in India
„Barbarians“ - Latin lessons on the battlefield

“Arminius really thrashed old Varus – 9 AD is the date to remember” is a very rough translation of a mnemonic taught to German schoolchildren that will doubtless reawaken memories of dry history lessons for anyone who had to study the ancient world and the Annals of the Roman scholar Tacitus. Now, Netflix’s first epic historical series “Barbarians”, which sees the streaming service devote six episodes to the Battle of the Teutoburg Forest, is anything but dry. Nonetheless, it is not only the lame dialogs that exude the musty odor of long-forgotten Latin classes.

It all got off to such a promising start: shortly before the series launch, Netflix admen garnered nods of smiling acknowledgment from many film critics by releasing press material in Latin. The happy anticipation did not last long, as “Barbarians” soon proved to be not nearly as original as its PR campaign: worse still, the six-part history lesson turned out for the most part to be an inane historical soap opera, its characters sporting a hip grimy look complete with chicly draped furs, rakishly braided shaggy hairstyles and no shortage of blood spatter. A risky ménage-à-trois, rolling heads and the obligatory crucifixion were also served up, naturally. This wouldn’t even be such a problem if the series had at least surprised the viewer with some original ideas and entertaining plot twists, or didn’t take itself quite so seriously. However, while this conventionally produced bloodfest would love to be as cool as “Vikings” or as wild as “Britannia”, it has the clunky feel of a swashbuckling community theater production. Tension? Not really – after all, we know only too well who butchered whom during the Battle of the Teutoburg Forest back in the day, which leaves little scope for spoilers.

What is far more surprising is that it has taken until now for a TV production to feature the legendary battle that saw the Roman Empire suffer a previously unimaginable defeat. The massacre had far-reaching consequences, abruptly put the brakes on the expansionary pretensions of the Roman Empire in Germania, and proved a turning point in the history of the entire continent. Led by Arminius, a chieftain of the Cherusci tribe who is also known as Hermann, an alliance of Germanic tribes destroyed three Roman legions plus their auxiliaries in the year 9 AD – despite the fact that the rebels were far fewer in number than their adversaries. Their cunning ambush cost at least 15,000 Romans their lives – an eighth of the Roman army. General Publius Quinctilius Varus fell on his sword in shame. Archeologists have identified the site of the days-long bloodbath as being close to Bramsche-Kalkriese in the Osnabrück region, where excavations have unearthed numerous finds from the battlefield.

© Netflix / Photo: Katalin Vermes “Barbarians” entwines the events leading up to the battle with the fates of three friends: Folkwin (David Schütter), Ari (Laurence Rupp), and Thusnelda (Jeanne Goursaud) have been bound by an oath since childhood. While Ari and his brother are handed over to the Romans as a token of peace by their father, a Cherusci tribe chieftain, the spearman Folkwin and Thusnelda stay back in the village. The childhood friends soon become secret lovers, for the chieftain’s daughter has been promised to another. Only years later does Ari, now known as Arminius, return to his homeland. As the adoptive son of General and Governor Varus (Gaetano Aronica), he has had a successful career in Rome, reaching the rank of leader of Varus’ auxiliaries. His task now is to help the general finally force the Germanic peoples to their knees. This is another reason why his return provokes mixed feelings in him. Meanwhile, considerable unrest is brewing in the villages of the rival Germanic tribes. High tolls and brutal punishments are prompting increasing calls for an end to the feuds and for the tribes to join forces in defending themselves. When Folkwin and Thusnelda of all people steal Varus’ legionary eagle, Arminius must decide: will he betray his adoptive father and help his childhood friends? The rest is history.

© Netflix / Photo: Katalin Vermes Andreas Heckmann, Arne Nolting, and Jan Martin Scharf (“Weinberg”), the team of showrunners and authors, picked an ensemble of young actors and series veterans such as Bernhard Schütz (“Eichwald, MdB”), Ronald Zehrfeld, and Sophie Rois for “Barbarians”. Laurence Rupp (“Vienna Blood”), awarded the Austrian Film Prize in 2019, plays the grim-faced Arminius who is torn between two different worlds, while Jeanne Goursaud (“In Your Dreams") as the rebellious prince’s daughter and David Schütter (“We Are Young. We Are Strong.”) are more than a match for one another in both verbal skirmishes and the turmoil of battle. Which makes it all the more awkward that the unfortunate blend of wooden delivery and teenage soap opera babble ruins some of the dialogs and strips much of the power from the trio’s explosive dynamism. Given that the plot is not particularly complex in any case, the fact that the Roman legionaries speak Latin in a melodious Italian accent does little to help.

© Netflix / Photo: Katalin Vermes If on top of everything else Thusnelda, sprinkled decoratively with blood, manages to keep her hair looking nice during the most savage fight scenes, if warriors climb out of a latrine pipe spotlessly clean, and if leather uniforms appear freshly scrubbed even in the thickest mud, then we can dismiss “Barbarians” once and for all as nothing but a trashy historical drama. And this is what the series remains even during the action finale, which lacks any directorial finesse worthy of mention and involves the obligatory bellowing warriors bashing each other’s heads in in slow motion. This is all the more disappointing given that Steve Saint Leger, who directed the final two episodes, already acquired some battlefield experience behind the camera during “Vikings”, and that the cast was trained by battle choreographer Richard Ryan (“Troja”), among others. 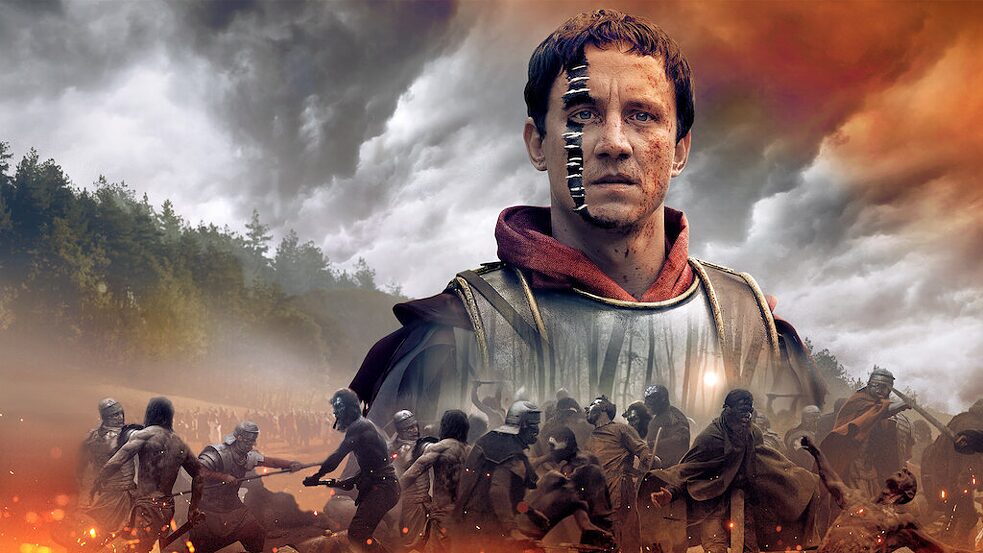 © Netflix / Photo: Katalin Vermes The media response was accordingly muted, with spiegel.de even going as far as to advise its readers: “Don’t watch it whatever you do.” That may be a little harsh, as series fans who like nothing better than muddy battle scenes against a stylishly gloomy backdrop of awful weather, plus agony and heartache ramped up to the max, will enjoy “Barbarians” hugely nonetheless, and just a beer or two will immediately help make the stilted dialogs sound more natural. And it appears that many Netflix users share this view, as the six-part series has made it to the top of the streaming service’s film and series chart. Season two is already at the planning stage. Maybe next time the dialogs will be a bit more convincing.

In India and in Germany

From screenplays to wild parties – Angela Zierow spent years in Los Angeles experiencing the everyday craziness of Hollywood life at first hand. Before turning her back on Hamburg and its crappy weather, she worked as an editor on the German TV and movie magazine cinema, and wrote for lifestyle magazines such as Max, Galore, and Vanity Fair. These days, she shuttles between Los Angeles, Hamburg, and London, always in search of new film stories and the perfect post-movie cocktail, and is as convinced as ever that hers is the best job in the world.