Quebecers of a certain age hold fond memories of Montréal’s famed Bavarian beer hall, the aptly named Le Vieux Munich. Of course, some former college students may prefer to forget (or be unable to remember) their visits to this vaunted temple of cheap beer. Located in the heart of the Latin Quarter at the corner of Saint-Denis and René-Lévesque, Le Vieux Munich was a nightlife hot spot between 1967 and 1995. Most popular during the ’70s and ’80s, its decor was a kitschy ode to the southern German state.

Bavarians have a reputation in their own country as an independently minded (and somewhat hardheaded) people. Perhaps it’s no coincidence that Quebec enjoys special trade and diplomatic relations with this rather distinct region of Germany, famed for its overflowing beer steins. Here at home, the demand for locally brewed lager shows no signs of abating, although the Märzen brand remains popular throughout la belle province. Bavaria has also produced its fair share of filmmakers, including its renowned enfant terrible, Rainer Werner Fassbinder.

The latest heir to this cinematic tradition, Ronny Schalk, now reigns over Germany’s television landscape. As one of the writers of Dark, the streaming juggernaut that ran from 2017 to 2020, Schalk revealed the commercial potential of foreign productions on that most American of streaming platforms, Netflix. And Netflix took notice. With Oktoberfest: Beer and Blood, Schalk makes the leap from dystopian science fiction to historical drama (although the macabre overtones remain). This new six-part series, now on Netflix, boasts stunning high production values that will keep viewers glued to the screen.
Netflix / NP Movies Theater

The hops of Wrath

The series’ title lays it all out: the setting (Munich), the dramatic catalyst (beer) and the genre, with its unabashed nod to Quentin Tarantino. While it certainly takes liberties with the history, audiences will quickly become engrossed in this tale of early-20th-century Germany, a country on the brink of turmoil. There is a lot to swallow—and digest—in Oktoberfest: Beer and Blood, with its depictions of rapid industrialization, loosening societal mores, the declining influence of the bourgeoisie against the rise of scheming tycoons and the struggle of the lower classes in the face of capitalist oppression. 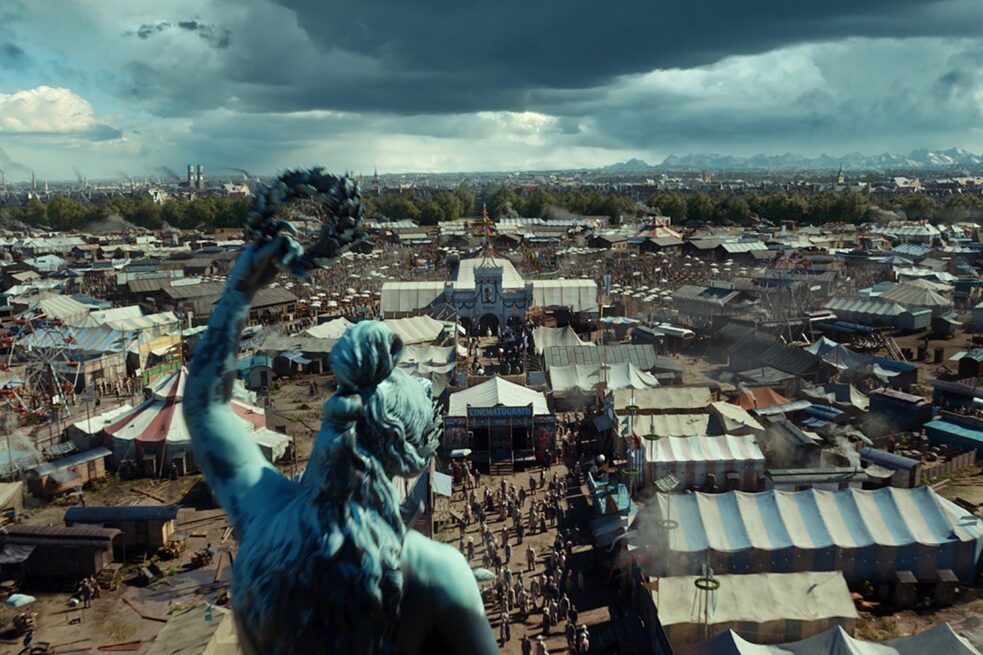 © BR/ARD Degeto/MDR/WDR/Zeitsprung , Photo:Dusan Martincek The series opens in Munich with the arrival of Curt Prank (a solid performance from Mišel Matičević / Babylon Berlin’s shifty owner of the Moka Efti), who is intent on disrupting the local beer cartel, breweries whose monopoly has gone unchallenged since the founding of Oktoberfest—“the people’s festival”—in 1810. This newcomer is not exactly welcomed by Bavarian society. Munich’s upper echelons have nothing but contempt for Prank, who brazenly parades his money, his leather boots and his beautiful daughter, Clara (Mercedes Müller), attempting to consolidate his business by marrying her off to a wealthy local suitor. Prank is hell-bent on bringing his grand vision to life: an enormous Oktoberfest tent big enough to hold 6,000 revellers as they quaff beer against a background of thunderous oom-pah-pah music, shielded from both the rain and prying Bavarian eyes.   Prank faces obstacles at every turn, from powerful beer kingpins to small-scale brewers to hard-working families like the Hoflingers, whose ill-fortune and recalcitrant ways seem ripped from the pages of Romeo and Juliet. Prank’s rebellious daughter Clara has her own agenda as well, driven in part by her budding sexuality. Rather than acquiesce to her father’s demands, Clara sets her eyes (among other things) on the Hoflingers’ impetuous elder son, Ronan (Klaus Steinbacher). Enlisting the help of her new governess, Colina (Brigitte Hobmeier, who could easily stand in for actress Hanna Schygulla in a Fassbinder biopic), Clara pursues a relationship—and plotline—that mixes sex, motherhood, murder and lies (in a meet-cute worthy of Shakespeare, neither Clara nor Ronan is aware they are members of warring families). 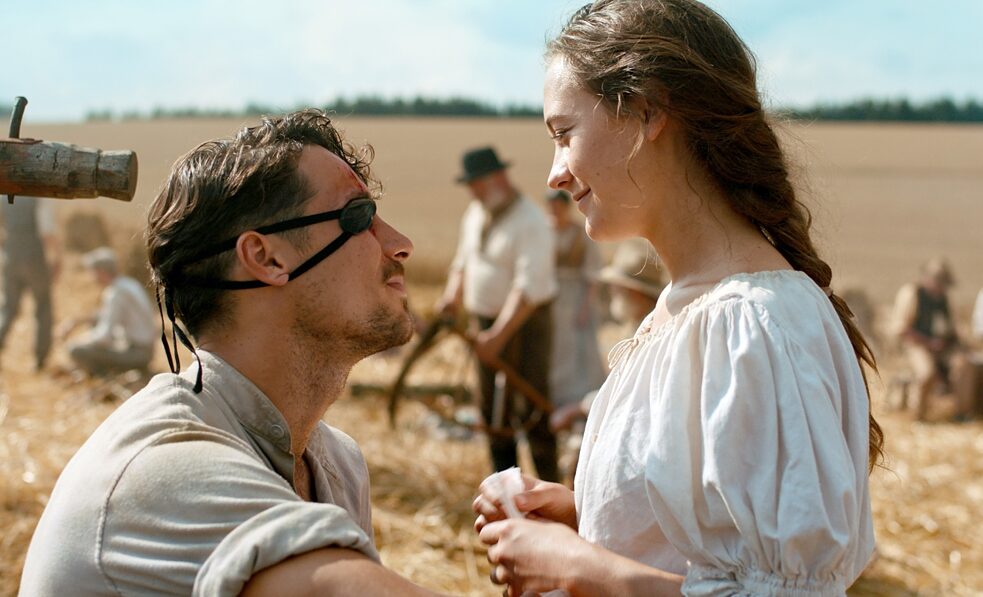 As a work of historical fiction, if not historical accuracy, the series can claim to be based on real events. The Carl Prank character is largely inspired by Georg Lang, a native of Nuremberg whose boots earned him the nickname “Crocodile Lang.” That said, this period piece is all the more intriguing for its portrayal of the era’s socio-economic upheavals.

While COVID-19 may have put a damper on Munich’s Oktoberfest in 2020, previous years have attracted crowds upwards of 6 million people, with 7.5 million litres of beer served in 2018 alone. This spectacular event is driven by high-powered commercial interests, and Oktoberfest: Beer and Blood is their compelling origin story: the collusion of rich merchants, the destruction of small players and the race for profits on the backs of the working poor. At one point the series takes a page from Lysistrata, the Greek comedy by Aristophanes in which women put an end to war by going on a “sex strike.” In this case, it’s lager, not lovemaking, that gets denied, as waitresses refuse to serve patrons until they get a wage increase. In that moment, Gerdi, the Hoflinger matriarch who harbours a dark past, could be channelling Rosa Luxemburg. 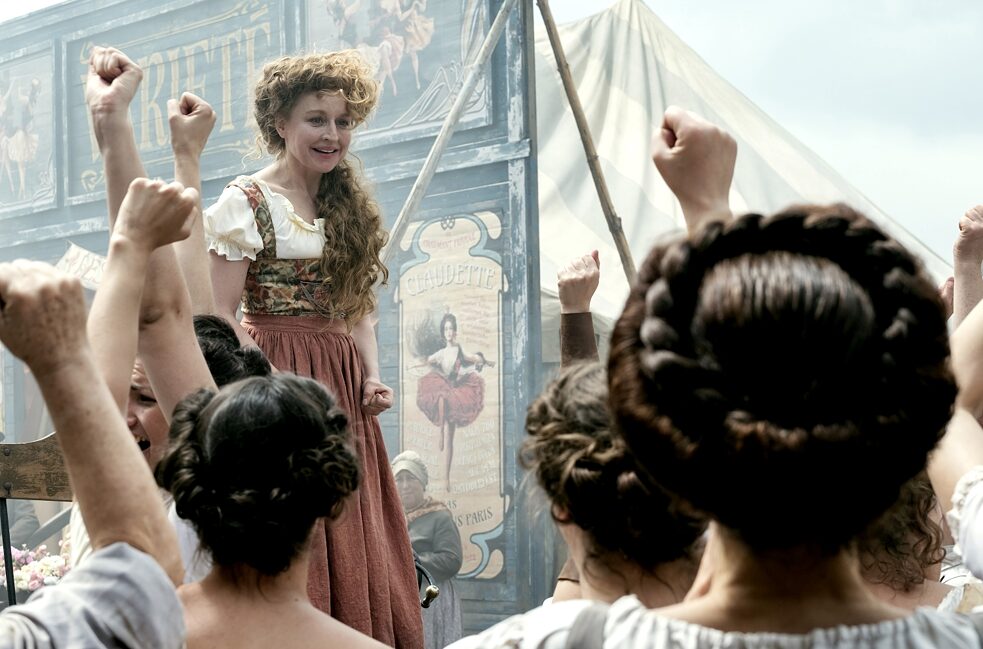 Blood is thicker than beer

Martina Gedeck (The Lives of Others, The Baader Meinhof Complex) delivers an intense performance as Gerdi Hoflinger, lighting up the screen at every turn. Unfortunately, while she may evoke shades of Mother Courage, Gerdi seems incapable of fending off the evil forces threatening her family. Meanwhile, the relationship between her reckless son Ronan and his meek younger brother Ludwig (an excellent Markus Krojer) serves to embody the conflict between entrepreneurial ambition and artistic aspiration. Ludwig also acts as the viewer’s guide through Munich’s forbidden underbelly, forerunner to 1920s Berlin, a city that the more free-spirited of Munich dwellers dream of escaping to.

But the real appeal of Oktoberfest: Beer & Blood lies in the clash between time-honoured traditions and the promises of the future, forcefully ushered in with cunning, betrayal and criminal behaviour. This reimagining of Bavaria as a beer-strewn battlefield will intoxicate viewers with its technical achievements, grand opulence (it features no fewer than 4,000 extras) and the outrageous behaviour of its monstrous protagonists from a bygone era. An era not too distant from our own.

André Lavoie has been a film critic at Le Devoirsince 1998, a contributor to various magazines and radio programs (Aujourd’hui l’histoire), and a contract researcher at Ici Radio-Canada Télé (Vox Pop). After obtaining his master's degree in film studies at the Université de Montréal in 1992, he worked for several years as a facilitator of introductory workshops on the seventh art. Since 2001, he has devoted himself mainly to his work as a journalist, critic and lecturer.