The market for computer games outstripped over the last year even the good old moving pictures. But the commercial success of new media is usually followed by artistic reflection, artistic derision and artistic refinement.

Video killed the radio star. In my mind and in my car, we can't rewind we've gone to far. Pictures came and broke your heart, put the blame on VCR. (Buggles 1979) 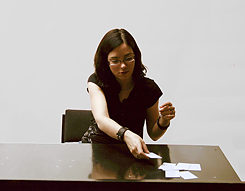 New media are possessed of the brassiness and arrogance to proclaim previous media to be hopelessly old-fashioned clobber. So, for example, early photography sneered at painting, then film sneered at photography, video sneered at film and now computer games sneer at video. “Video killed the radio star”, we sang with The Buggles in the 1980s, and today “Game Art killed the video star” could serve as a veritable anthem. The good old moving picture appears to have stepped into the shadow of the computer game. This is indicated not only by the thundering sales of popular video games, but also by the production costs of games like Half-Life 2 and Wing Commander IV, whose budgets exceed double-digit million euro figures, and last but not least by the interest with which artists have turned to the new medium.

The commercial success of new media is usually followed by artistic reflection, artistic derision and artistic refinement. This was already the case of photography: Henry Fox Talbot coined the poetic description “art of fixing shadows” for photographic technique. Photographic artists soon joined the photo-technicians. Film artists then followed Hollywood and next to the great movie palaces stood the cottages of art house cinema. Now, nearly forty years after the development and issuing of the first computer games, curators present the public with exhibitions of “computer games by artists” (so the title of the first Game Art exhibition at the Hartware Medienkunstverein, Dortmund, in 2003)

While early Game Art was often deployed only on the computer screen, there has recently been the tendency to develop it as a playful interface between the computer system and human users. Artists such as Jess Kilby, //////////fur//// and Tobias Leingruber use the interface between viewer and machine as the anchor point of a critical artistic statement. The article of furniture on which the American artist Jess Kilby can foretell the future looks like the black table of a card reader, but it conceals a computerized system for reading non-visible information, burned onto so-called RFID chips. The Tarot cards, which are outwardly identical to normal ones, contain electromagnetic information that the reading device can decrypt, just as a RFID reader does in a clothing shop. But with her constructed interface the artist questions a relationship that does not occur to us in shopping: how does technology change our interaction with machines? Her game of technologically advanced card reading indicates the role and magical power of enchanted machines. Kilby’s art game applies artistic strategies to reflect on playful technology.

Using toys and pieces of ubiquitous computer technology, Tobias Leingruber constructs devices that turn contemporary objects into riddles resembling surrealist collages, making the familiar strange. His Skatekeyboard is a playful interface that does not obey the principle of maximizing practical efficiency, but rather demonstrates, with its doubled impracticality, that the ASCII keyboard may be useful to web surfers as an interface but does not really lend itself to skateboarding. The formal similarity of surfboard, skateboard and keyboard, and the phonetic proximity of their names, mixes technology and lifestyle in a ludic interface: an interface between systems that could not be more playful. Today there are a variety of ludic interfaces that the computer industry has developed in order to make the promise of playful interaction tempting to computer users and to sell computer games at a high price. These include both the Wii Remote input devices and Microsoft’s Kinect. 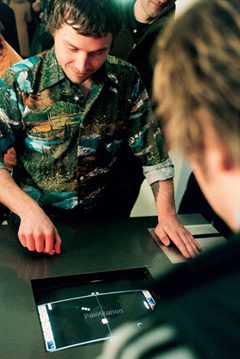 Wicked tongues sometimes maintain that these popular input devices are adapted from artistic inventions which were developed by the interactive art of the 1960s. Be that as it may, the adoption of ideas and systems takes place in both directions. The computer industry takes up what artists produce on a small scale, and artists use what big corporations throw onto the market. If we consider the ludic interfaces of the artists group //////////fur////, we often find parodies of industrial products. Painstation, for instance, is obviously a cynical rejoinder to SONY’s Playstation. //////////fur//// reverse what gives the impression of being friendly, child-oriented and harmless in the SONY games into its opposite. Painstation is an interface that hits back: the motorized whip punishes bad players and the built-in thermal effectors generate thrills, pain and burning of the skin.

Game Art that can attack social reality with a wink is in fact a continuation of a project begun by art, Media Art and Computer Art in their best forms. Game Art can’t kill video. Game Art also can’t replace film. But it does, thanks to the freshness of its medium, constitute a highly contemporary continuation of a form of artistic expression that uses medium to say something about what lies beyond the medium.

Mathias Fuchs
is a leading theorist of Game Art and Game Studies. He is an artist, a musician and media critic, and was for the last ten years a Senior Lecturer at the University of Salford in England. He has done pioneer work in the area of the artistic use of games. Since October 2012, he has held a professorship at the Leuphana University in Lüneburg.