It’s the translators who initiate us into the worldwide canon of literature, Nora Gomringer observes upon the announcement of the winner of the 2021 Nobel Prize in Literature, and carries us back to the age of German Romanticism.

We can’t help feeling like we’ve been caught with our pants down here in Germany these days when it comes to literary translation. Brilliant! Abdulrazak Gurnah wins the Nobel Prize and all too many of us have got to admit: never heard of him, never read him. And the immediate question “Who has translated him and has he even been translated into German at all?” is answered by his translator, Thomas Brückner: “Yes, since the 1990s.” His books have been translated into German by various translators and published by several German publishers. Literary scholar Christa Morgenrath tells Deutschlandfunk Kultur that she has long wondered why he isn’t known to more readers in Germany. His writing is “psychologically subtle and idiosyncratic”, she says, and his portrayals of people torn apart by inner dilemmas are attuned to the present-day zeitgeist. His main themes are flight and migration. For my part, I can’t confirm or contest anything said about him yet. All I can do is peruse what those who’ve read him have to say and what they proudly share with us uninitiated, for they’ve had Gurnah on their radar for some time.

There’s something a little magical about the present day and age. It’s as though many were called upon, but precious actually qualified, to “serve the cause of knowledge”, if any such thing exists, by contributing to the great work of literary history, the general consensus on what constitutes the continuum of literary phenomena that are liable to have a seminal influence on the future and capable of describing and perpetuating humanity in its diversity as well as selected particularities and peculiarities. Important books that form and legitimize the canon. Were it not for translators, German readers, seated in their comfortable wing chairs, would know so much less about the world. This is a rather simplistic thought, I know, but it’s something that’s apparently still seldom thought of, except on the covers of translated books in the publishing business. Often as not, the translators go uncredited, and yet they’re the enablers, the ones who enable us to partake of the knowledge, to discuss and share the thoughts, of a thinker in another language.

Have you been to the new Museum of German Romanticism in Frankfurt yet? After climbing lots of stairs, you take a very rewarding curated plunge there into thoughts about translation, a Romantic art par excellence. So it’s no wonder modern-day fans of Goethe, Heinrich Heine and ETA Hoffmann tend to turn up there, for the works of these German Romantics were among the most widely translated into other European languages in the 19th century, paving the way for their international reception, interpretation, analysis, criticism, admiration and adulation. These translations opened up the German brain, so to speak, to reveal its ongoing thought processes. As intensely as Romanticism caught on in other European countries, it was actually first and foremost a German export. Like the concrete poetry movement, which raised its more visual than verbal – but nonetheless thoughtful – head in Brazil and Switzerland almost simultaneously in the 1950s, Romantic ideas and aspirations ran the whole gamut in Germany, more variously and richly than anywhere else, from light to dark, from ironic to rapturous, from philosophico-scientific to belletristic, and including masculine and feminine variants. The first translations thereof appeared in English and French. 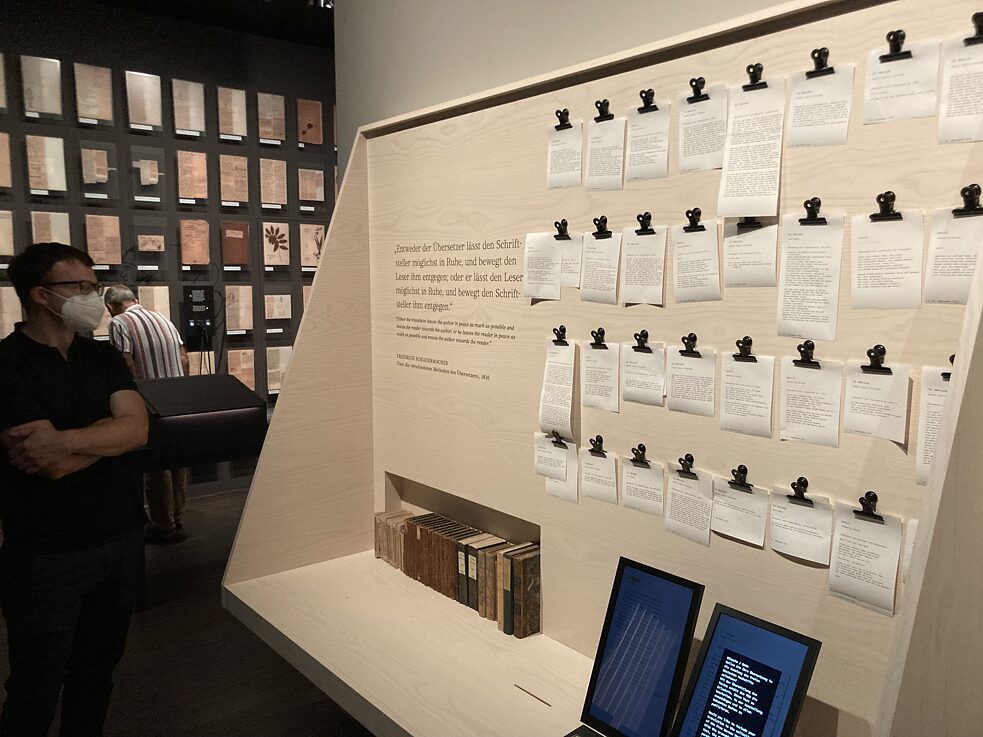 At the Museum of German Romanticism in Frankfurt: the translator’s workstation in the spirit of Schleiermacher | Foto: Nora Gomringer

After all, we like to make machines smarter. Ever since the character of Olimpia appeared in ETA Hoffmann's short story The Sandman, we’ve been awfully fond of automatons! Along the same or similar lines, you can flip open or snap shut Heinrich Heine’s commentary at each stop along the way through the exhibition. Translations of Shakespeare, as well as modern renderings of works from various stages of old German, enabled Germans to understand their own Minnesang love songs and the epic saga of the Nibelungs. According to Schleiermacher, the translator marks what is foreign, rather than adapting and smoothing it out, and demands that the reader adapt to the text. Translation, then – and one immediately feels the urge to snap one’s fingers, shout “Novalis!” and throw blue flowers into the air – is a universal act, because, as Novalis put it, “Ultimately, all poetry is translation.” This is the translator's art: to create relevance and elegance.