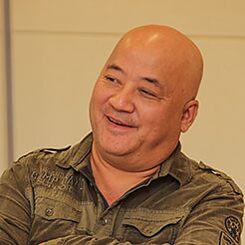 Since returning to Vietnam in 2001, he has worked as a freelance editor and translator for various publishing houses. To date he has translated 32 belletristic titles without specific focal areas as well as various plays and films.

In 2014, Quang Le received a scholarship to attend a translator conference at the Literarisches Colloquium Berlin; in 2017, he received funding to attend the “Kein Kinderspiel” (“Not child’s play”) translator seminar in Hamburg. Quang Le lives in Hanoi.

Working as a translator can make you very lonely, so I was very glad to be among likeminded people again and that we were able to share with each other ― and not just about our work.