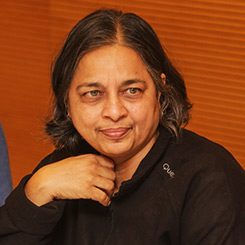 Photo: Goethe-Institut Korea/OZAK Sunanda Mahajan earned a degree in German Studies from the University of Pune. After completing her teacher training in Hyderabad, she went to Mumbai and completed her Doctorate in Comparative Literature with a focus on women’s literature. Since 1984, she has worked at the University of Pune, where she holds a Professorship for Literature and Literary Studies.

Sunanda Mahajan is the co-editor of a quarterly journal for translations that publishes Marathi translations of literary texts from various foreign languages. She has translated many texts for this and other journals, primarily narratives, poems, and excerpts from novels and autobiographies. She was also involved in producing a trilingual dictionary for Marathi, Russian, and German.

Sunanda Mahajan received support from the Austrian Exchange Service (OeAD) to spend a month in Vienna for the translation of Elfriede Jelinek’s Die Liebhaberinnen (Women as Lovers). She has received numerous awards for her translations. Sunanda Mahajan lives in Pune.

The Social Translating Project makes it possible for us to engage in productive dialogue with other translators and especially with the author, who not only gives new insights into the text and points out other ways of approaching the text, but also makes an important contribution to the translation.

Holocaust chya kavita. Continental Prakashan, 2006 (life and works of Gertrud Kolmar, Else Lasker-Schüler, Nelly Sachs and Rose Ausländer, with a translation and analysis of selected poems on the Holocaust)