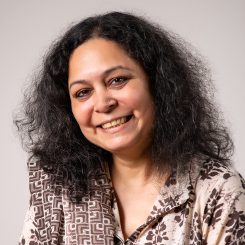 She has been working at the Goethe Institute since 1996, was a program officer for twenty years, and since 2016 has been the director of the institute's library in Mumbai. In her doctoral dissertation she compared the alienation effect in epic theatre and in the Rasa theory of ancient Indian dramaturgy.

In addition to the Indian languages Marathi, Hindi and Sanskrit, she is fluent in English and German. She has translated German poems and plays into Hindi, Marathi and English. She also writes poetry in Marathi, which is regularly published. She has translated plays, poems, short stories novels and children's and youth literature from English and German into Hindi and Marathi. Her book reviews and essays on literary topics appear regularly in printed or digital form in various national newspapers and magazines. Jayashree Joshi lives in Mumbai.