It wasn’t just help that was in demand during lockdown. Sometimes it was about social interaction as well. | Illustration (detail): © picture alliance/dieKLEINERT.de/Christina Brets

Along with the coronavirus, a wave of helpfulness spread through German neighbourhoods in 2020. But will the new solidarity continue “post-corona”?

When Sabine walks around her district she recognises lots of faces – something you wouldn’t necessarily take for granted in a city with over a million inhabitants like Berlin. Some things here are almost reminiscent of village life: she swaps plant cuttings and plays boules with her neighbours, she’s revising for a German exam with the woman who lives opposite, and when her bike got stolen several neighbours offer to lend her one.

At least that is how Sabine describes it on the online platform nebenan.de, the largest neighbourhood network in Germany with around two million users, through which she even met her best friend. Since 2015 the platform has offered users the opportunity to become more familiar with their own neighbourhood online and offline, and it is also used to chat, organise community projects or support each other. Sabine, who is actually in her eighties, got to grips with technology especially for this. “When you get older, it’s important that people visit from time to time,” explains the pensioner.

When the COVID-19 pandemic spread throughout Europe in March 2020, this became even more important – but also even more difficult. In particular people in high-risk groups suddenly faced lots of unanswered questions:  How are you supposed to manage tasks such as grocery shopping or popping to the pharmacy without exposing yourself to the risk of infection? 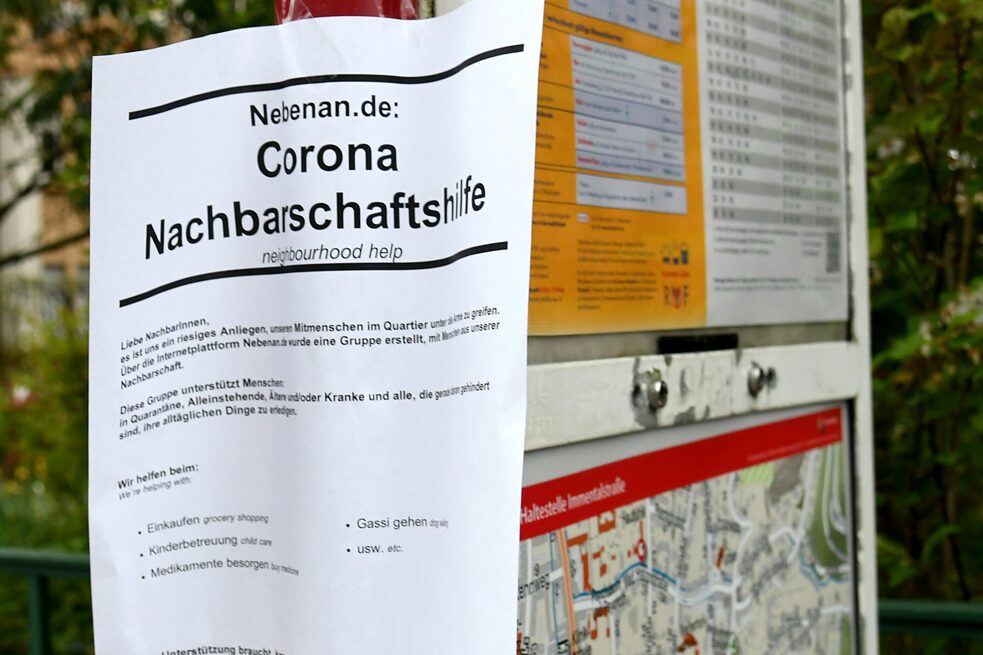 Not on the internet but looking for help? nebenan.de also organised offline support services during the corona lockdown. | Photo (detail): © picture alliance/Winfried Rothermel

A large number of committed citizens took the initiative and offered to help their fellow humans in such situations and others. In view of the contact limitations, many of them used the internet for networking: Apart from nebenan.de another platform for this was CoronaPort.net, an assistance portal set up by a high school student from Berlin. The website is designed to provide individual corona-related assistance quickly and was only started in March 2020. Users of this service enter their location on a virtual city map to find or offer help in their area. There are filters for different kinds of support – for example buying a few items or the entire weekly groceries, doing household chores, or bringing products like disinfectant.

Both networks successfully managed to connect people in high-risk groups with neighbours willing to provide help right from the first corona lockdown in spring 2020, and over the next few months these neighbours individually supported tens of thousands of people. CoronaPort.net experienced rapid user growth as soon as it was launched – within a few days hundreds of help requests and offers appeared on the interactive map. And new registrations doubled in March 2020 on nebenan.de too: during a single month 200,000 new users discovered the platform for themselves.

To make sure people without access to the internet were not excluded, nebenan.de also set up a neighbourhood help hotline and distributed posters in communal hallways. 7,600 requests for help were received in four months as a result. 85 per cent of them were arranged successfully – mostly within a few hours or days. Popular requests included help with shopping, household jobs and pet care. 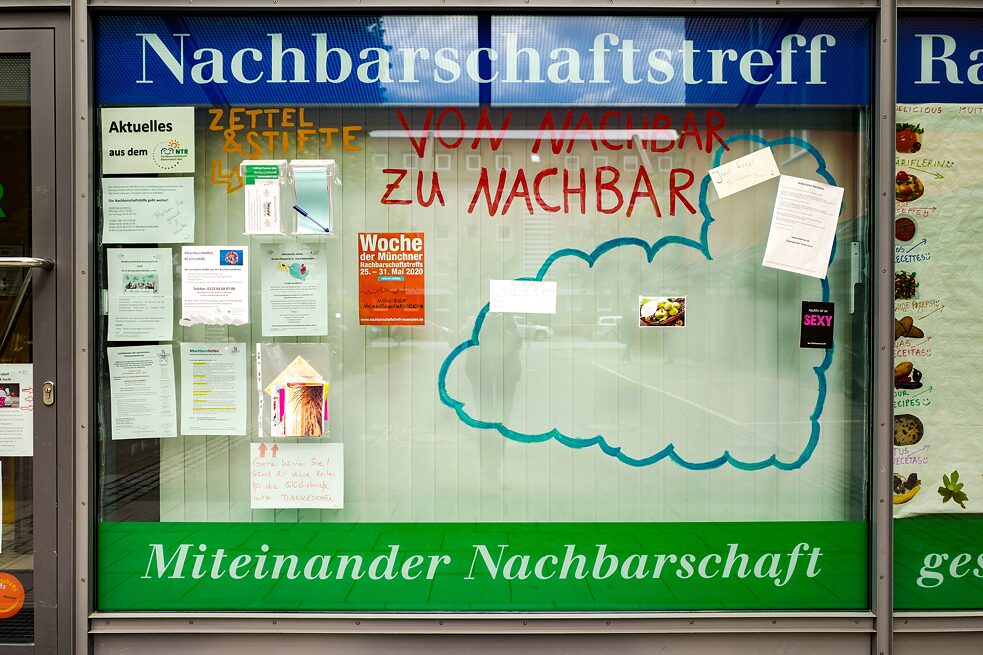 Community and neighbourhood are gaining importance

Towns, villages and non-governmental organisations became active in spring 2020 as well. Rama from Marburg is one of over 300 volunteers involved in the Coronahilfe aid programme, a joint project involving the city of Marburg and the volunteer agency, as well as the charities Caritas and Alzheimerhilfe. She went shopping twice a week so that elderly people didn’t have to be exposed to the infection risk in the supermarket. “I’m glad to be able to support them in this difficult time,” she said in an interview.

Authorities and voluntary organisations joined forces to put offers of help into practice as quickly as possible in other communities too. Charitable initiatives such as the nationwide project against partner violence StoP Partnergewalt, which has relied on voluntary helpers for a long time, carried on their work when cases of domestic violence shot up during lockdown: They distributed flyers in grocery bags, made posters offering help to victims of violence and made phone calls to ask neighbours personally how they were.

Above all it was the many private initiatives that demonstrated how diverse community activities were. When the vaccination campaign started in spring 2021, neighbourhood groups arranged lift services to vaccination centres or helped elderly people with their registration. At local help groups, tradesmen and physiotherapists offered their support, people who wanted to help with tutoring, childcare or companionship for dementia sufferers got in touch.

It sounds like a rediscovery of the neighbourhood: people who help each other, who just knock on their neighbours’ doors to spend time together. During the corona pandemic, many people saw “the inestimable value of mutual support and helping each other” far more clearly than they did before, reckons Sebastian Gallander, CEO of the nebenan.de foundation.

Whether this realisation is something that will survive in the long term remains to be seen. But a survey by nebenan.de at least gives us a clue: Around one-third of the assistance partnerships arranged via the platform in the first four months of corona have become regular support relationships that will continue even “post-corona”, according to the network. Groups and friendships organised for the neighbourhood through shared lockdown activities like balcony singing or mask sewing have also mostly continued, they found.