Rich and Poor in Germany
The Evolution of Inequality

Having space to live, work and keep your distance – all of these things suddenly became a luxury item during the corona pandemic. Why social distancing opportunities have become a parameter for inequality and why children have been particularly affected.

Sick or Healthy – Also a Question of Social Status

Since the outbreak of the COVID-19 pandemic, over and over again there has been much discussion about the gap between rich and poor. The main question was whether this exceptional situation also exacerbated social inequality. For example, it was not until the pandemic that many people really became aware that personal closeness and social distance affected their state of health – as well as the fact that one’s state of health depended on one’s material resources. Depending on their financial situation and social position, the effects on the health of those affected by the virus differed considerably from one another. There are several reasons for this.

Cramped and hygienically questionable living conditions, for example, in shared accommodation, greatly increased the risk of an infection with the coronavirus as well as the illness taking a more severe clinical course. The risk of infection was particularly high in refugee accommodations, in which large families do not even have their own sanitary facilities, and where social distancing and hygiene rules can only be adhered to with considerable difficulty or not at all. Those who were privileged to work at their own desk isolated in their home or who could drive to the office by car, also had a much lower risk of infection than people who work in production lines or in professions with customer contact or who had to travel to work in full buses and trains at rush hour.

It was, however, not just in terms of physical health that the pandemic had a greater impact on poorer people than on richer people. During the two lockdowns, it made a huge difference for children whether they lived in a villa with a large garden and their own room or with their family in two rooms in a high-rise apartment on the outskirts of the city. Poor children often did not have the privacy of their own room and thus a quiet workplace that would have enabled them to concentrate on learning. They were more out of their depth with home schooling than their financially better-off classmates. Distance learning often created even more distance from learning, especially for those children who are often referred to in public as “educationally deprived”. In addition, the language barriers in immigrant families compounded the problem. If the parents spoke only a little bit of German, they could not serve as a “substitute teacher” and support their children in home schooling. This was why, in extreme cases, the pupils from socially disadvantaged homes were left behind and the educational inequality that existed before the outbreak of the pandemic was cemented. 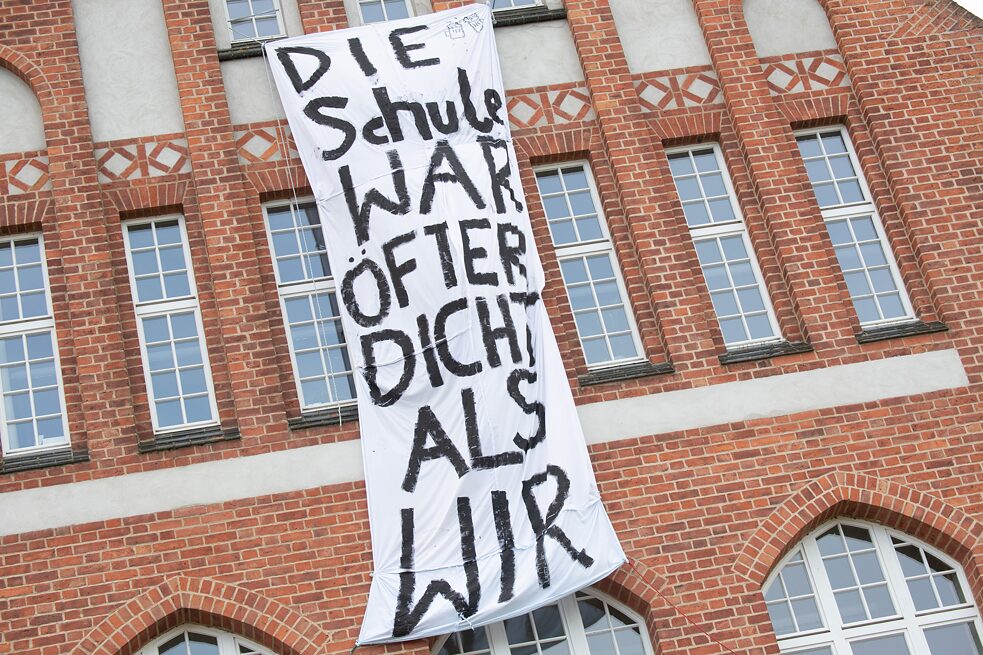 The frustration of a graduating class. | Photo (detail): © picture alliance/dpa/dpa-Zentralbild/Stefan Sauer
The COVID-19 pandemic has therefore had an extreme polarising effect in social terms, especially on children and adolescents. For example, children and adolescents without their own digital devices and a WLAN connection in their parents’ home were excluded even more than before, while the opposite was true for children with the right technical equipment and a stable internet connection. Some teachers in schools with a predominantly socio-economically disadvantaged pupil intake did not even consider distance learning at first – for example, because they suspected a lack of equipment in the parents’ homes or a lack of digital skills in the students. Other teachers were quickly stretched to their limits when they tried to establish and maintain contact with all their students or their parents.

The state of emergency, which lasts more than a one and a half years now, means a much longer period of time for adolescents than for adults. In adolescence in particular, forced separation, loneliness and social isolation, which some young people experienced in the two lockdowns, have an extremely depressing effect, because this phase of life is crucial for the personality development of those affected and is of great importance when it comes to the question of how self-confident they will be as adults.

Minors who could no longer meet their friends and classmates and were no longer allowed to hang out at the playgrounds and sports facilities that were closed for hygiene reasons during the first lockdown, complained of greater isolation, especially if they were an only child or did not have any siblings of the same age. During the second, longer-lasting lockdown, these minors suffered greatly from a lack of experiencing new things and boredom.

This was especially true for children from socially disadvantaged families, to whom little attention was paid anyway. For them, the contact ban on educators and teachers imposed during the lockdown was a traumatic experience that triggered panic-like reactions in individual cases. Children who felt helpless at the mercy of the pandemic, powerless and unable to act, were thrown completely into mental turmoil.

The COVID-19 pandemic shows us that society has to move closer together so that all its members can maintain the necessary distance when it comes to protecting against infection without suffering personal disadvantages. If the government does not ensure that the families’ different levels of material resources are compensated for by some form of social equilibrium, a growing proportion of the younger generation will remain educationally disadvantaged. At the same time, the social, educational and childcare infrastructure must be expanded, with the focus on neglected urban districts. The subdivided secondary school system in German-speaking countries, which helps to reinforce socio-spatial segregation in the field of education, appears outdated.

Prof Dr Christoph Butterwegge lectured in political science at the University of Cologne until 2016. On 18 August 2021, he and his wife Carolin Butterwegge published the book “Kinder der Ungleichheit” (Children of Inequality).