Inequality between employees in South Korea has increased during the pandemic. | Photo (detail): © Keun Young Lee

Due to the pandemic, the South Korean labour market has gone through drastic changes. In an interview researcher Jong-jin Kim speaks about the winners and losers of the Corona crisis - and how social problems that have arisen should be dealt with.

How has the corona pandemic influenced the Korean labour market?

Jong-Jin Kim: In February 2020, social distancing was put into practice in South Korea. As a result, almost all corporations that provide travel, aviation, transportation, and other direct services, as well as almost all social layers have suffered a big blow. Many people had to give up or take a break from their employments and the losses were even more severe for non-regular and unpaid employees. On the contrary, the IT, communication and finance sector has “hit the jackpot”, so to speak. Employment rates increased and so did performance-oriented pay. Since the pandemic, there is the talk about a “k-shaped” development in the society. Incomes of regular employees in large corporations and the public sector are rising, whereas the lower middle class experiences a huge drop in income. The economic and social gaps will widen between classes.

The pandemic has hit people in the service sector and the young generation particularly hard. Why?

Jong-Jin Kim: According to reports of the International Labour Organization (ILO) and OECD from 2020 and 2021, the four groups of self-employed and irregular employees, informal workers, young adults, and women have been the most severely hit by the pandemic. For young people, the process of finding their way into the job market has been prolonged by two or three years. Consequently, cases of depression and suicide among people in their twenties is increasing dramatically. As jobs are increasingly cut in the service sector, many cinemas and fast food chains are hiring fewer staff. Also, many women have lost their work as caregivers for elderly, because many families in South Korea do not want their elderly relatives to live in care facilities such as retirement homes due to the risk of infection, but rather at home. So, we can see that people in low income and unsteady employments are the most affected by the pandemic.

Are there workers who have a better chance of working from home than others? And how has the development between the professional fields changed?

Jong-Jin Kim: In 2021 working from home had a breakthrough in South Korea with more than one million people, which is 5.4 per cent of all wage workers. Most of them were employees of large corporations, regular workers, administrational office staff, overall people, who have good-quality jobs. They have the biggest chances of changing to a remote workplace. Out of all OECD countries, South Koreans have the longest commuting hours, so by working from home, they can save a lot of time. So, even if someone is right now working for a company that doesn‘t have a flexible working system, more and more employees want to change into a remote workplace in the future.

Since the pandemic, more and more people have been earning their money through platform work – which are services that are mediated via online platforms and are carried out either locally as so-called gig work or online as crowd work. What problems does this development pose?

The South Korean labour market is made up of two parts: one consists of large corporations that employ more than 300 people, and the other one of small and middle-sized businesses which have less than 300 employees. So far, the biggest issue in the labour market was the gap between large corporations and small and medium-sized companies. But since the pandemic, there is another group, the "unpaid workers". "Unpaid" in this context means that the income of these people varies greatly, they are not permanently employed by a company and their working conditions are insecure. This includes people who offer services such as private lessons or driving services, as well as platform workers and freelancers. This is why we now talk about a “tripartite labour market”. Because “unpaid workers” do not work based on a legal employment contract, they are not protected by the labour law or by social security policies. After the pandemic, we expect that platform workers become an integrated part of the labour market, but how their rights are to be guaranteed is still an open question.

How is the situation of platform workers currently being discussed in South Korea?

Jong-Jin Kim: Major changes are currently taking place in politics, on which the pandemic is acting as a catalyst and which otherwise would not have happened so quickly. For instance in March 2021 a law for the protection and support of platform workers has been proposed and is currently being passed. It contains platform workers’ protection rights, that will be guaranteed by having the platform owners and users provide and sign contracts, with consequences like penalty fees should they be broken or wrongfully terminated.

What needs to be done to make conditions in the South Korean labour market more equitable?

Jong-Jin Kim: At present the number of “unpaid workers” in South Korea is estimated to about 6.81 million. If self-employed workers were included, this number would be even higher. These people are currently not protected by the South Korean labour law that was established in 1953. Many citizens are now demanding a new basic law for employees. As soon as someone works, even if they are ill, they should be paid hourly or have the right to take holidays. In addition, these workers should have opportunities for training and other support, the right to take part in decision-making and to discuss fair contracts and regulations. If talks are held between worker unions and the government at both local and central level – regardless of the profession – a big step in the right direction would already be taken. 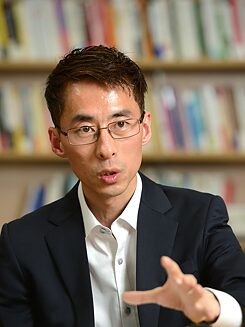 Jong-Jin Kim | Photo (detail): © Sisa IN, Mooyoung Yoon
As an expert in South Korean workers issues, Jong-Jin Kim is working as senior research fellow in the Korean Labour and Society Institute. Currently, he is a member of the Platform Industry Council under the Economic, Social and Labour Council and vice chairman of the Youth Policy Coordination’s Working Committee Office under the leadership of the South Korean Vice-President.