To look for more flexible frame, one whose face is turned towards change and transformative possibilities, we could cast a quick glance at the masculinities in popular culture.

Hindi cinema after Independence, reflected the nation-building concerns of those years and was preoccupied with creating an emblematic Indian identity, in which masculinity was often performed in terms of duty. Reigning stars of the post-Independence era centralized a masculinity whose appeal lay not so much in physique but in persona. Raj Kapoor, Dilip Kumar, Ashok Kumar and Dev Anand are examples of big stars of the decade, whose appeal lay in their emotive force as idealistic, noble or conflicted figures dealing with social and national value systems. Others like Sunil Dutt and Dharmendra often played engineers, dam builders and doctors, a feature Sanjay Srivastava has called The Five-Year Plan Man.

This was an (upper caste) masculinity that put family, nation, and public life above the personal, often sacrificing love for these institutions. This privileging the public identity over private desires, this emotional repression, even defeatism, was a thick vein of masculine performance, often played out in duets where men scoffed at love as either false or silly and women defended it. The essence of this binary is represented by the figure of Devdas, unable to choose between the two, a story that is recurrently remade and is always a hit, decade after decade, pointing to a deep resonance for the masculine emotionality.

But it would be a mistake to consider the foregrounded masculinity of heroes in films to be the only masculinity being performed. Hindi films upto the 1980s, featured an assemblage of characters alongside the protagonists, who had their own sub-plots - romantic, villainous, or supportive. These were not as normative of alpha. In comedy they are sometimes shown as weaker or servile and belonging to minority identities. But they are also performed through song and dance and romance, as appealing and pleasurable. The figure of Johnny Walker, thin, funny, often in love and a great dancer, would be one of these. Villains, while representing a threat to the norm, were often dapper and handsome and in contrast to the hero, profoundly pragmatic, especially about sex and money. They represented an unsentimental masculinity, pretending to be nothing but a relationship to power and desire, unlike the progressive hero, whose sentimental politics sometimes masked his social identity as upper caste or land-owning, but fallen on bad times. A complementary texture is also provided by even more fleeting appearances in the set piece songs that featured in most films. For instance, qawwalis, a frequent fixture, often featured men who performed a more queer identity, in dress and affect, which was not framed in any particular way.

In other words, there was a tapestry of masculinities present on screen, and while the central characters were idealized, the presence of other figures and masculinities was also pregnant with possibility of us, the audience identifying with them instead of central figures (as indeed I found myself doing often with the vamps and dancers or the queer qawwals).

From time to time these masculinities were combined in a figure. Shammi Kapoor, in the middle-class love stories of the 1960s represented a bodily exuberance, brashness in romance, a comfort with camp and voguing, and a simpler relationship with love which was to be rebelliously pursued not sacrificed, preferably in a roll-top car, dressed in a sharp outfit. Rajesh Khanna was committed to batting his eyelashes and fighting for his love, while committed to family. These masculine figures ruled briefly before yielding to a different, unrepresented masculinity.

The creation of the working-class hero in Amitabh Bachchan cohered around an angst-ridden masculinity, at odds with the world and centralized the working-class man, not just the genteel middle-class poverty of earlier urban films. It also prepared the stage for a time when the ‘character actors’ of an older cinema slowly began to filter out of the screen, dominated by his figure.

In post globalized India we see shifts and reconfigurations of these masculinities. Shahrukh Khan, who moved from the edges as a villain, to the centre as a superstar hero and defined an era starting in the 1990s, combined some of the quality of old heroes by not being very brawny, some qualities of old villains, by playing characters who were pragmatic and frank about money, success, and desire. However, he also over-wrote some of the lines of duty by providing a strong primacy for love and desire as a purpose that can modify tradition more than rebel against it. His rise was paralleled by a very bodily masculinity – of Salman Khan or John Abraham – a muscular, hairless man-child, often possessed of a sweetheart and a poor understanding of romantic boundaries. The masculinity of more recent cinema erases away many other masculinities – and femininities – centralizing mostly protagonists and a limited world around them.

The discourse around toxic masculinity in a sense mirrors the centralized masculinity of 21st century popular cinema, in which masculinity is constantly seen a singular instead of multiple masculinities. Its opposite is supposed to be an idealized but vaguely defined non-toxic man.

The internet has seen a diffusion of these previous masculinities across different parallel spheres. The English-speaking internet is often preoccupied with the goal of identifying and labeling toxic masculinity and delineating rape culture. What is called ‘bro-culture’ performs masculinity as a combination of some referenced above – the laddish scatological jokes of stand-up comics yoked to a curriculum of progressive concern like Save the Internet, He for She and also communal violence. Many of these masculinities foreclose a discussion on caste – and sometimes identify toxic masculinity as intertwined with underclass identity, someone not schooled in progressive language and ideas.

On the other hand, feminist masculinity may also be performed through a professed concern about women’s issues, ally-ship, relationship to one’s own emotionality and other public statements. In essence, the internet, like cinema, provides a stage for the performance of allegiance to ideas and the creation of a symbolic self-image along the lines of a loose normativity.

But in other spheres of the internet – for instance You Tube, one may spy a masculinity which is indeed what we call toxic. Its assertion through rape threats, violence against minorities, caste contempt are not simply statements performed on Twitter but presented though non-fiction style videos or comic skits, usually right-wing. In still other spaces some of the lost masculinities of an earlier time – more queer, more comic, more fluid are strongly present on the now-banned Tik Tok, where myriad trans identities from rural and urban backgrounds are on display. Gender bending scripts, drag, role reversal, sexual explicitness – all are present with abandon and exuberance. A slightly more santised version of this is present through dance reels and videos on Instagram where several popular masculine influencers perform a more feminine masculinity while identifying as heterosexual and presenting a spectrum of masculinities.

A granular view of how masculinity is performed on screen is perhaps more useful to us in understanding how gender can be softened to reflect a more life-like fluidity, to create a more inter-sectional discourse around masculinity, to talk about femininity not only as under threat or control but also existing as a range of registers, desires, agencies and assertions. It would also liberate us from a very literalistic understanding of toxic masculinity and point us to an involvement with the idea of who we are as people, and how we can inhabit a more liberated social and private world. 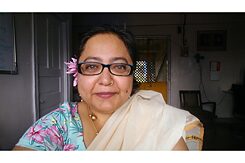 © Paromita Vohra Paromita Vohra is a filmmaker and whose work explores feminism, love and desire, urban life and popular culture. Her work has been broadcast and is taught internationally and exhibited at the National Gallery of Modern Art, the Tate Modern and The Wellcome Trust. She is the Founder and Creative Director of AGENTS OF ISHQ India‘s best-loved website about sex, love and desire. AOI's exuberant and playful videos on everything from consent to masturbation to mental sexual health, beautiful art and compelling personal narratives of intimate life, have created a new Indian language for talking about desire and sex, in a pleasure positive and intersectional way, drawing on popular culture and the power of art to counter narratives of sexual violence and danger.

Her documentaries include the landmark films Unlimited Girls, Q2P, Morality Tv Aur Loving Jehad: Ek Manohar Kahani and Partners In Crime, Where‘s Sandra?, Cosmopolis: Two Tales Of A City, among others. She is the writer of the film Khamosh Pani (Silent Waters), the comic Priya‘s Mirror the play Ishqiya, Dharavi Ishtyle as well as several documentaries, essays and short fiction. She writes a weekly column, PARONORMAL ACTIVITY, in Sunday Midday and previously wrote the
column How To Find Indian Love in the Mumbai Mirror. She has also created two installation pieces - So Near Yet So Far (NGMA) on telephones and desire, and A Love Latika (Goethe-Institut / Max Mueller Bhavan New Delhi)‚ 'an electronic forest of erotic poetry‘.