Episode #1: Anatomy Of A Protest Song 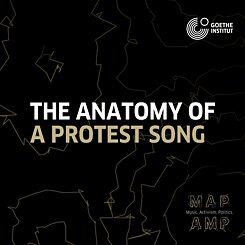 Social and protest movements tend to inspire a flurry of protest music and performance, but not all protest songs are created equal. Certain songs have the power to capture the imagination in unprecedented ways, either by bringing different people together as a social/political community, urging them to action, or commemorating the revolutionary and egalitarian ideals of a particular movement.

Sumangala Damodaran
Sumangala Damodaran is a Professor of Economics, Development Studies and Popular Music Studies at Ambedkar University Delhi. She is also a singer and composer. Her archiving and documentation of the musical tradition of the Indian People’s Theatre Association from the 1940s and 1950s has resulted in a book titled The Radical Impulse: Music in the Tradition of the IPTA and an album titled Songs of Protest and she has performed from the documented repertoire extensively in different parts of the country and abroad. She has also collaborated with poets and musicians from South Africa around a project titled ‘Insurrections' which has resulted in five albums. She is currently engaged in researching the relationship between music and migration, particularly of women in slavery and servitude across centuries and across vast tracts of the globe that were linked through long distance trade in commodities and symbolic goods. This work is being done in collaboration with several universities in Africa and Asia.
​Ronid ‘Akhu’ Chingangbam
Ronid ‘Akhu’ Chingangbam is a folk/protest musician and part of Manipuri rock band Imphal Talkies. The band has been performing at protest events in and around Delhi, playing songs with contemporary lyrics that speak out against the conflicts in Manipur, especially the Indian Army’s brutal response. Their track Lullaby that elaborates on this situation and the repression by the army through the Armed Forces Special Powers Act, 1958, and atrocities towards minorities are two elements that the band stands staunchly against and the band, which performs both in English and Manipuri, has been touted ‘the voice of the Northeast’ for their work. Life in a conflict-ridden area is an important theme defining their material, and there is a profound anger, pathos and frustration that comes through from the tales of people being kidnapped, killed and raped, all of which is delivered with a healthy dose of satire.
​Tenma
Tenma is an independent musician, composer and producer based in Chennai. He is also the founder of Madras Records. He is part of Casteless Collective, a band that he created with filmmaker Pa Ranjith. The 12-member music group is considered india’s largest ensemble political band. The first track released – Jai Bheem Anthem – set the tone for the band’s upcoming work by bringing Ambedkar to a younger generation, and thereby beginning a fresh conversation on caste and societal issues relating to marginalised communities into a popular space. Through their music the Casteless Collective has sparked a number of conversations about human rights and social justice within the Indian system.

About the Podcast Series

M.A.P // A.M.P is a new podcast series by Goethe-Institut that aims to map the role of music in activism, movements, and protests. Host Bhanuj Kappal explores the intersection of music and activism in the South Asian Context, aided by musicians, academics and cultural organisations from across the subcontinent. Guests include Carnatic musician T.M. Krishna, New Delhi-based academic and singer Sumangala Damodaran, Bangladeshi pop musician and songwriter Shayan, and Manipuri protest folk musician Akhu Chingangbam. Over eight episodes we will dive deep into the history of progressive musical traditions on the subcontinent, look at the challenges and opportunities met by cultural practitioners across the region, and imagine new possibilities for global solidarity and action through music.

Our host Bhanuj Kappal is a Mumbai-based writer and music critic who has been covering Indian independent music for the past 14 years, with a special interest in exploring junctures of music and politics. His thesis research focused on protest music culture in India, with an emphasis on activist poets in Maharashtra. He is a regular contributor to Pitchfork, GQ India, Mint Lounge, and Mumbai Mirror, and has also written for The Caravan, BBC Culture, The National, and the New Statesman politics blog. He also worked on a landmark story about sexual harassment in the independent music industry for The Caravan. In recent years, he has written extensively about India's emerging hip-hop scene, which is also the subject of his upcoming book. He's also the writer and director of Gully Se Gully Tak, a 20-part Audible Original podcast series (released Dec 2019) that focuses on the lives and careers of Indian rappers.