A hunting scene; a collection of handprints; images from a life lived several centuries ago — these are some of the paintings found in different caves around the world. At the time of their discovery, archaeologists and historians wondered not only about who these early humans were but also why they chose to depict these events on surfaces that have stood the test of time. What was it that they were trying to say? At what point in the evolution of man as a species did the idea of documenting life, or in some cases, telling a story, come about? 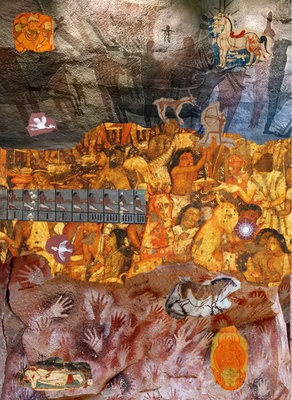 There are many theories but perhaps the simplest one is that of the early man's understanding of the self — and its relationship with the other, and their place in the world. Some historians posit that the well-known paintings of hunts, featuring men and the animals they hunted, came from a symbiotic relationship that man had with other creatures they shared the land with — both species experienced interchangeable roles as the predator and the prey. The handprints have been interpreted as a way of saying “We were here,” while the scenes from the Ajanta and Ellora caves are of a time of much progress, of when people such as the ancient Egyptians had formed a more elaborate society to live in; where man, creature and god co-existed on the same plane. And with every step forward, the idea of the self and the other was sharpened into being.

When each of the narrative experts answered the question of what they hope to achieve with their presence in this world, a pattern quickly emerged. Each expert hoped to facilitate positive change in the way the people around them interact with each other. It could be by offering resources, or opportunities, by sharing their space and their tools — demonstrating an understanding that there is no self without the other. But how can we go about understanding each other in 2022, when every bit of technological innovation and advancement brings people closer, only for us to realise how far apart in thought and practice they really are. How do we understand each other in the age of misinformation?

A simple exercise of reading the news from around the world was illuminating: in every article, there was more than one story, more than one point of view. Once we have tackled the danger of a single story, of the power it holds, how can we go
about dismantling the authority of that single story? What if we tried to speak in each other's voices?

Once again, our narrative experts were tasked with an exercise: to tell each other's stories, share another person's dreams with the group. By doing so, each member was actively practicing care. How do we define care? The quality of attention paid while listening to each other resulted in a wider understanding of each other; understanding then translated into a sense of responsibility when it came to sharing another person's story, or in this case, their dream.

Back to "Once Upon a Tomorrow"