An evening of conversation between Inka Parei and Sandip Roy

Inka Parei, born in Frankfurt am Main in 1967, has lived in Berlin since 1987. She has published short stories, as well as the novels "Die Schattenboxerin" (1999), "Was Dunkelheit war" (2005) and "Die Kältezentrale" (2011). Her works have been translated into numerous languages and have received numerous awards, including the Hans Erich Nossack Förderpreis, the Ingeborg Bachmann Prize, and a fellowship at New York University. She is currently a visiting professor at the German Literature Institute in Leipzig and is working on a new novel.

The conversation was broadcast live on the Facebook page of the Goethe-Institut Kolkata on 30.04.2021. You can find the recording of the conversation at:  #2_Youtube


Enjoy a reading of excerpts from the book The Cold Centre by Inka Parei performed by Tanmay Dhanania. 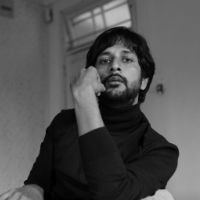 © Tanmay Dhanania Tanmay Dhanania is an actor and theatre maker. He has trained as an actor at the Royal Academy of Dramatic Art, London. He has acted in several well-known UK TV shows. He has acted in and produced independent films like Brahman Naman, premiered at Sundance 2016 and became India's first Netflix Original and Garbage which premiered in the Panorama section of the Berlinale 2018. Tanmay acted in and produced the film Cat Sticks which won the Jury Award at the Slamdance Film Festival 2019 and is currently on MUBI.