Ludwig Mies van der Rohe’s McCormick House in Elmhurst, Illinois
Two Field Reports on How it Feels to Live with and in Bauhaus Architecture

The McCormick House in Elmhurst, Illinois is a single-family home that was designed in 1952 by Ludwig Mies van der Rohe, the last director of the Bauhaus. This is one of only three residences designed and built by Mies in the US. John McKinnon, the executive director of the Elmhurst Art Museum and artist Claudia Weber give first-hand impressions of living with and in a house designed by a master of the Bauhaus.

John McKinnon on the Preservation of a House

As director of the Elmhurst Art Museum, I have been met with numerous challenges and rewards around the McCormick House designed by Ludwig Mies van der Rohe. This little-recognized prefab prototype is one of only three single-family homes built by the famed architect in the US, and it is a host to its own complexities and history.

Ludwig Mies van der Rohe, McCormick house view of front exterior, 1950s | © Hedrich Blessing Archive, HB15690B, Chicago Historical Society
In 1991, the McCormick House was purchased by the museum as an anchor to its new arts complex. The home was moved from its original site, as the first structure on the museum campus in 1994. Mechanicals such as telephone lines, plumbing, sprinkler pipes, and more came directly from the house into the new building, which was completed in 1997. Separating – but also hiding – these mechanical systems helped maintain the “less is more” philosophy by Mies, as well as the house’s clean modern look.

McCormick House Restoration, 2018 | Photo by Kendall McCaugherty © Hall+Merrick Photographers
I was able to help the museum separate the McCormick House from the museum’s main building. This act of preservation revealed the full exterior and original designs by Mies for the first time in nearly 25 years. One of the biggest challenges was helping people visualize what the building would look like after the separation. Fundraising was especially difficult because two buildings met seamlessly, making the McCormick House camouflaged. I tried out several strategies and the best was to show patrons where the buildings would start and end. It worked, but some colleagues teased me for fundraising with a piece of tape on the floor. The new experience of walking under the carport and crossing a new doorway is symbolic in many ways, and allows visitors to better appreciate the house. I hope it gives our guests a vision for what can also be done with the house’s interior since it is only partially restored.

Installation view of “Assaf Evron & Claudia Weber” | Photo by Jim Prinz
These preservation efforts have given the building more visibility and opened up more programming possibilities for us. As the only contemporary art center in the US that oversees a house designed by Ludwig Mies van der Rohe, the museum has a unique responsibility and opportunity. Each of our rotating exhibitions, talks, and other programs build on the legacy of the house in a new way, forming a complex narrative over time.  There isn’t just one story about the McCormick House, rather there are many. 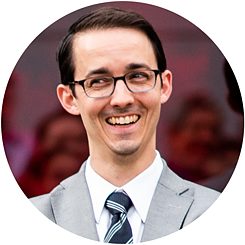 John McKinnon | Photo: The Adamkovi John McKinnon was appointed Executive Director of the Elmhurst Art Museum in 2017. He has recently overseen restorations to Mies van der Rohe's McCormick House, and an expansion of the museum's programming. He currently serves on the City of Elmhurst's Public Arts Commission and the Arts DuPage Advisory Committee. His previous positions include Program Director of the Society for Contemporary Art at the Art Institute of Chicago, and Assistant Curator of Modern and Contemporary Art at the Milwaukee Art Museum.

Claudia Weber on Reoccupying a Museum

From February to April 2019 I moved into one wing of Ludwig Mies van der Rohe’s McCormick House to temporarily challenge its current role as a museum by reoccupying it as an actual home. Since the house lacked a kitchen and a functioning bathroom, my first steps included the expansion of the house’s floorplan to the Elmhurst Art Museums’ education center and the YMCA to create some basic living conditions.

Claudia Weber at the McCormick House | Photo: Jim Prinz
To make myself at home in the house, I brought a carefully selected set of furniture and objects that I either already owned or specifically bought, built or commissioned for this occasion, and which would be flexible enough to support any type of activity that unfolded over the two months. I also created a 260-piece oversized card set, called Exquisite Corpse – the name is borrowed from the French surrealist game Cadavre Exquis (mid-1920s) –, which offered an informative but also playful way to reconsider the house’s trajectory: Organized into four categories, House, (Social) Context, Discourse, and Ephemerals, the cards not only addressed the work of the architect and the life of the residents, but also the societal shifts in the US since the 1950s as well as the house’s changed location and use.  Visitors could interact with the cards in a variety of ways, including browsing, associative pairings or structured games. Each combination thus offered a different narrative and added a new facet to Ludwig Mies van der Rohe’s prototypical house. This project was funded by the Elmhurst Art Museum, the German Federal Foreign Office, and the Graham Foundation for Advanced Studies in the Fine Arts. Additional support came from the Goethe Institute, and the BDI. 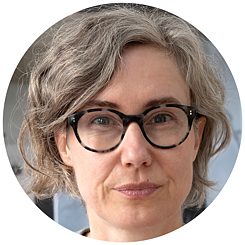 Claudia Weber | Photo: Andrew Finegold In her art practice, Claudia Weber addresses the reciprocal relationship between the built environment and the status-quo. She works variously with photography, sculpture, and/or text as part of her conceptual and site-responsive approach. Weber has exhibited internationally, including at Mies van der Rohe’s McCormick House / EAM, Elmhurst; Lehmann Maupin Gallery, Thierry Goldberg, and White Columns, all New York; CAC Bretigny (France); and Kunstraum Kreuzberg / Bethanien, Berlin. She has received a year-long New York Stipend by the Federal State of Berlin, a travel & study grant by the Jerome Foundation, and is a 2019 grantee of the Pollock-Krasner Foundation, New York. Weber has also participated in numerous residencies, including McDowell Colony, Peterborough (NH) as well as the Workspace residency at the Lower Manhattan Cultural Council, New York. As the founding editor of Plot.online, she brings together critical thinkers from a wide array of disciplines to address the narrative networks of images.