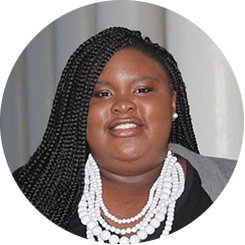 Zyahna Bryant is a student activist and community organizer studying at the University of Virginia (UVA), who works on issues of racial justice in Charlottesville, VA. She founded the Black Student Union at her high school and is a member of the Charlottesville Youth Council.

At the age of 12, she organized her first demonstration, a rally for Justice for Trayvon Martin and other unarmed black lives lost to police violence. In the Spring of 2016, Bryant wrote the petition to the Charlottesville City Council calling for the removal of the statue of Robert E. Lee and renaming of the park formerly known as Lee Park, which lead to the Charlottesville City Council vote to remove the Statues in 2017.

Bryant continues to organize with local teens and youth leaders to create change around issues of race and inequity. Her primary focus is on the achievement gap and equal access for students of color. In January of 2019, Bryant published a book, a collection of poetry and essays titled Reclaim.

She currently serves as the youngest member of the inaugural Virginia African American Advisory Board where she was appointed by Governor Ralph Northam. She also serves as a member of UVA President Jim Ryan’s Council on College-Community Partnerships. In November of 2019, Bryant was named as one of Teen Vogue’s 21 under 21 Young People Changing the World.